US Calls for Meeting with N. Korea 'Anywhere, Anytime, without Preconditions' 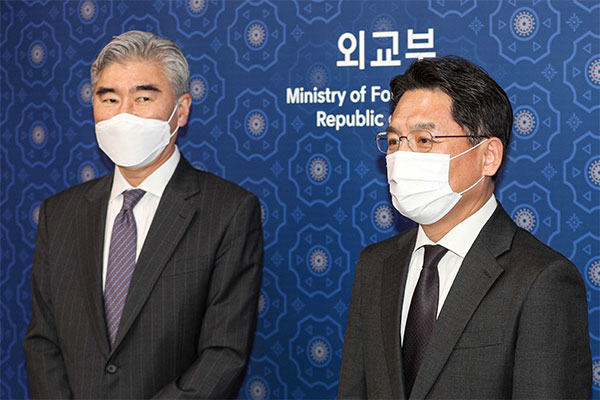 U.S. Special Representative for North Korea Sung Kim said he looks forward to a positive response from Pyongyang regarding the U.S. proposal to meet with the North "anywhere, anytime, without preconditions." During trilateral talks with his South Korean and Japanese counterparts in Seoul on Monday, Kim said that Washington's coordinated and practical approach is open to and will explore diplomacy with North Korea.

The United States has offered to meet with North Korea "anywhere, anytime, without preconditions."

U.S. special envoy for North Korea Sung Kim on Monday renewed Washington's call for dialogue during a meeting with his South Korean and Japanese counterparts in Seoul.

"We continue to hope that the DPRK will respond positively to our outreach and our offer to meet anywhere, anytime, without preconditions... "

"We will also urge all UN member states, especially UN Security Council members, to do the same, to address the threat posed to the international community by the DPRK... "

The three sides held a series of two-way and three-way meetings, coordinating their stances to kick start the stalled nuclear talks.

Seoul's Special Representative for Korean Peninsula Peace and Security Affairs Noh Kyu-duk said Seoul will continue to consult and adjust policies with Washington for the quick resumption of denuclearization talks with Pyongyang.

"At this critical juncture, today's meeting to strengthen the coordination among our three governments and find practical way to make substantial progress is very timely and will be instrumental to achieving our mutual goal sooner than later. I look forward to concrete, in-depth discussions with the U.S. and Japanese colleagues today."

After its comprehensive North Korea policy review, the Biden administration said it will take a “practical, calibrated approach” to North Korea.

In his first response to the U.S. approach, North Korean leader Kim Jong-un called for preparations for both dialogue and confrontation, speaking to the ruling Workers' arty Central Committee last week.

North Korean leader Kim Jong-un's sister, Yo-jong, said it is the "wrong expectation" for the U.S. to believe Pyongyang is sending a signal towards a possible resumption of dialogue.

In the statement, the powerful sister dismissed Sullivan's anticipation for talks, citing a Korean proverb by saying, "Interpretation of a dream is better than the dream itself."

During an interview on ABC’s “This Week” on Sunday, Sullivan commented on Kim Jong-un's recent call for the preparation for "both dialogue and confrontation" vis-à-vis Washington, calling the remarks an "interesting signal."

North Korean Foreign Minister Ri Son-gwon reiterated Kim’s comments in a statement on Wednesday, saying that his country is not considering any meaningless contact or any other possibility involving the United States that will waste its precious time.