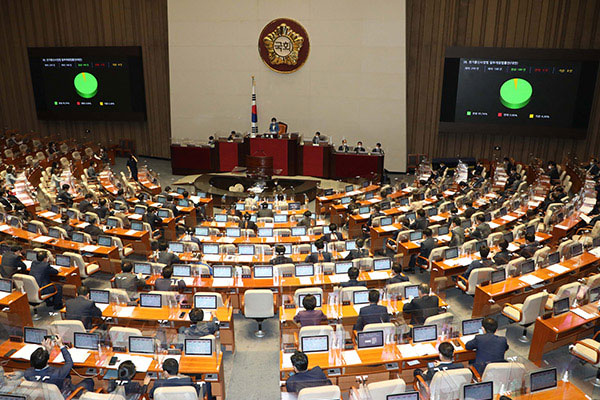 The National Assembly on Tuesday passed law revisions that prevent Google and Apple from forcing software developers to use their own in-app payment systems.

Revisions to the Telecommunication Business Act, also known as the “Anti-Google Law,” were passed during a plenary session, making South Korea the first in the world to legislate such regulations against the dominant app market operators.

It was initially scheduled to take effect from October this year, but Google later postponed it to April next year. Apple, which is also expected to be affected, earlier expressed its objection, saying it leaves users at risk of fraud.

Parliament’s move came amid concerns the app market operators’ policies will eventually lead to a hike in app prices with consumers carrying a heavier burden.

President Moon Jae-in said South Korea should take pride in the passage of the bill.

Presidential spokesperson Park Kyung-mee said Moon made the remark on Thursday amid foreign media’s positive assessment of the revisions.

Moon said that, with the passage of the bill, South Korea has become the world's first nation to define the duties of platform operators by law.