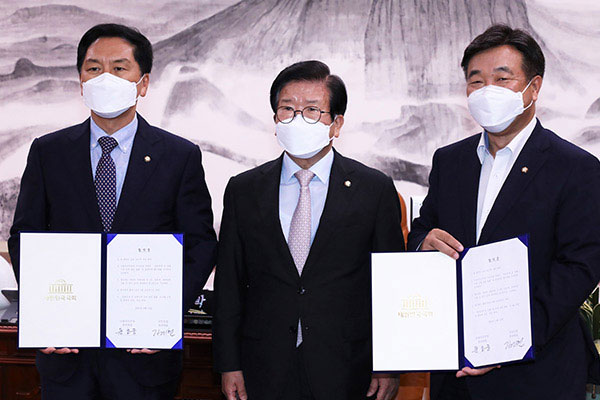 The main rival political parties have agreed to put controversial revisions to the press arbitration law to a vote at a plenary session on September 27.

The floor leaders of the ruling Democratic Party(DP) and the main opposition People Power Party(PPP) signed the agreement Tuesday afternoon after they reached a tentative agreement during a meeting earlier in the day.

Each party's representatives ratified the provisional agreement before signing a finalized document.

Under the agreement, the parties plan to set up an eight-member consultative body involving both parties and media and administrative experts to seek ways to further revise the disputed bill.

The DP proposed postponing the vote for discussions through the consultative body amid backlash from the opposition and media organizations, which accused the ruling camp of attempting to censor media outlets.

President Moon Jae-in has welcomed the decision by rival parties to take more time to review controversial revisions to the press arbitration law.

According to spokesperson Park Kyung-mee, Moon said freedom of speech is the backbone of democracy and must be protected along with people's right to know.

He said therefore related laws and regulations must be thoroughly reviewed and scrutinized to address concerns regarding their potential abuse.

But the president said safeguarding people from malicious false reporting and fake news is as equally as important. He said erroneous reports must be quickly corrected so that victims can heal from any physical, social or psychological damage.

The United Nations special rapporteur on freedom of expression has requested that the South Korean government clarify its position on the ruling camp-pushed controversial revisions to the press arbitration law.

According to the Foreign Ministry on Tuesday, Irene Khan sent a letter last Friday through the Office of the UN High Commissioner for Human Rights(OHCHR) and the South Korean diplomatic mission in Geneva.

Khan expressed concern over the infringement of the freedoms of information and expression, calling for adjustments to the bill in accordance with international human rights laws.

In particular, the rapporteur raised issue with any arbitrary restriction on such freedoms, saying any relevant law should be clear and made public. She added that exemplary damages could result in media self-censorship.

Khan said concerns escalate as access to information and free flow of ideas become more important ahead of the presidential election in March 2022.

The press arbitration bill is one of a number of divisive bills expected to be voted on during the 391st regular session of the National Assembly, the last regular parliamentary session under the Moon Jae-in administration, which began on Wednesday.