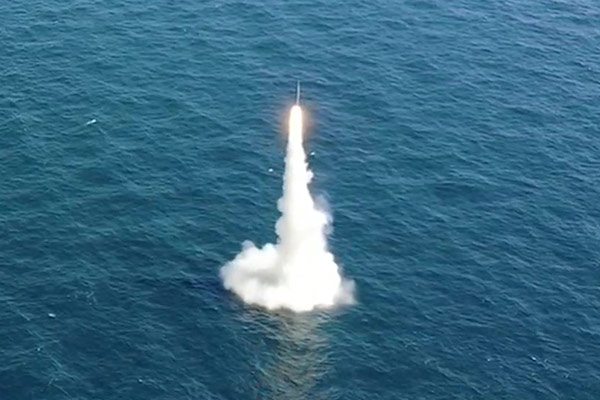 South Korea said Wednesday that it had successfully conducted an underwater test-launch from a submarine, becoming the world's seventh country capable of launching a domestically developed submarine-launched ballistic missile(SLBM).

The presidential office issued a statement saying President Moon Jae-in and other top government and military officials were on hand to observe the demonstration from a local test center of the Agency for Defense Development(ADD). The SLBM was fired from the navy’s newly commissioned 3,000-ton-class Dosan Ahn Chang-ho submarine while under water.

The test, which was observed from ADD’s Anheung Test Center in South Chungcheong Province, saw its SLBM fly along the agency’s planned trajectory to successfully hit its target, according to the statement.

The state-run ADD had earlier carried out several ground- and water tank-based SLBM tests, including ejection trials. The Agency also unveiled the development of a supersonic cruise missile beef up the nation's maritime defense, according to the defense ministry.

With its successful test, South Korea joins the ranks of countries with domestically developed SLBMs capable of actual field deployment, which include the U.S., Russia, China, Britain, France and India.

North Korea also claims it has developed a homegrown SLBM. But the South's military said the North has so far managed to fire its missiles from a floating barge, not from a submerged vessel.

Seoul's SLBM test came just hours after North Korea fired two ballistic missiles into the East Sea, and two days after it claimed to have successfully tested long-range cruise missiles over the weekend.

Moon said the upgrades of the nation's missile capabilities can serve as a foolproof deterrent against North Korea’s provocations.

Presidential spokesperson Park Kyung-mee in a statement on Wednesday said that Moon made the remarks after observing the test launch.

Moon emphasized that South Korea had conducted the test as scheduled in accordance with the military's existing plans to upgrade its arsenal, and not in response to the North's latest provocation, according to his spokesperson.

The powerful sister of North Korean leader Kim Jong-un criticized Moon for his remarks on the North.

Kim Yo-jong said that Moon reportedly had a slip of the tongue by using the inappropriate term “provocation,” which is often used by hack reporters, and expressed great regret over the word.

In a statement carried by the Korean Central News Agency on Wednesday, Kim warned that if Moon joins criticism and false accusations, it will lead to corresponding action and inter-Korean relations will end up in catastrophe.