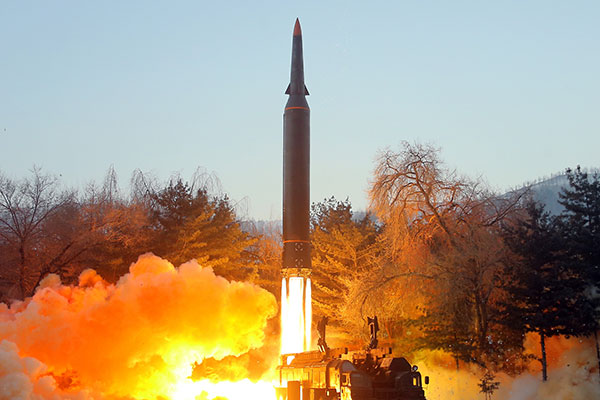 The Joint Chiefs of Staff(JCS) on Wednesday said North Korea fired an unidentified projectile into the East Sea early that morning.

The JCS announced the launch in a text message to reporters but details have yet to be disclosed.

This is the North's first launch of the year and came 78 days after the regime fired a new submarine-launched ballistic missile in October last year.

Announcing the result of a plenary meeting of the ruling Workers' Party late last month, the North stressed the need to continue producing modern weapons and enhancing its defense force.

Some observers say the launch may be a part of the North’s winter military exercises which kicked off early last month.

The North on Thursday said it had test-fired what it called a “hypersonic” missile.

According to the North's official Korean Central News Agency(KCNA), the Academy of Defense Science conducted the test launch on Wednesday.

The agency added that after the missile detached from the rocket, it  maneuvered 120 kilometers laterally and "precisely hit" a target 700 kilometers away.

The report said the test launch confirmed flight control and the stability of the missile, as well as the performance of the new lateral maneuvering applied to the detached hypersonic gliding warhead.

This was the second reported North Korean test of a hypersonic missile, after one on September 28 last year.

The KCNA said that the latest missile launch was overseen by senior officials of the Workers' Party and science and defense officials. North Korean leader Kim Jong-un did not attend.