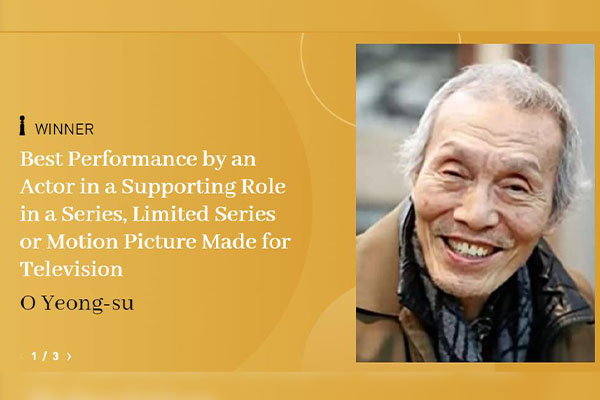 O Yeong-su has become the first South Korean actor to win an award at the Golden Globes for his role in the Netflix hit series “Squid Game.”

O won in the category of Best Performance by an Actor in a Television Supporting Role at the ceremony held on Sunday, beating out Billy Crudup and Mark Duplass of "The Morning Show," Kieran Culkin of "Succession" and Brett Goldstein of "Ted Lasso."

It was the only award of the night nabbed by the series. “Squid Game” received three nominations at the 79th annual Golden Globe Awards, losing out Best Television Series Drama to "Succession."

Lee Jung-jae, who played protagonist Gi-hun, was nominated for best actor in a TV drama series, alongside Brian Cox and Jeremy Strong of "Succession," Billy Porter of "Pose" and Omar Sy of "Lupin." Strong took home the win.

Nominees for the 28th SAG Awards were announced on Wednesday by U.S. actors Rosario Dawson and Vanessa Hudgens via Instagram Live. The ceremony will air on February 27.

“Squid Game” earned a total of four nominations, including Outstanding Performance by an Ensemble in a Drama Series, alongside “The Handmaid’s Tale,” "The Morning Show," "Succession” and “Yellowstone.”

The show was also nominated for Outstanding Action Performance by a Stunt Ensemble in a Television Series, alongside “Cobra Kai,” “The Falcon and the Winter Soldier,” “Loki” and “Mare of Easttown.”

In 2020, the cast of Bong Joon-ho's "Parasite" won for Outstanding Performance by a Cast in a Motion Picture and last year, actress Youn Yuh-jung won for her supporting role in director Lee Isaac Chung's film "Minari.”