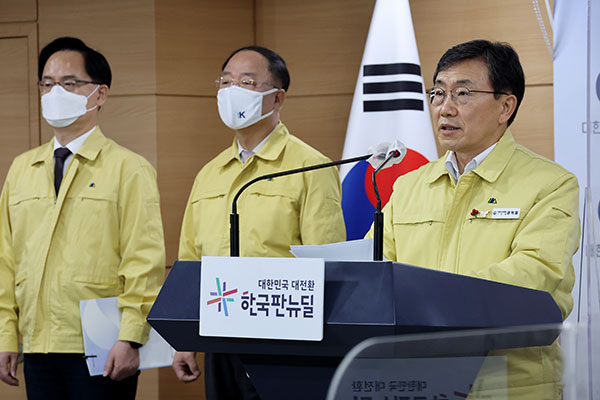 The government has decided to ease caps on private gatherings to six from the current four, but will keep the 9 p.m. curfew on business hours for restaurants and cafes.

Prime Minister Kim Boo-kyum announced on Friday that the government has decided to extend current social distancing rules by three weeks, but to adjust the cap on private gatherings in consideration of the public's stress and pain due to the prolonged antivirus measures.

The adjustments will be applied for three weeks from Monday through February 6.

The prime minister said that while some areas are showing improvement, infections are currently not decreasing with just two weeks until Lunar New Year. Additionally, there is the rapid increase of omicron cases to consider.

Kim urged the public to refrain from traveling to hometowns and meeting with family and relatives during the holiday to prevent a possible surge in cases.

The ruling by the Seoul Administrative Court immediately suspended the validity of pass requirements at shops, marts, and department stores as large as three-thousand square meters or more in the city.

The pass system has also been suspended for children aged 12 to 17, enabling them to use all 17 facilities subject to the system without presenting a pass. Individuals aged 18 and older will still be required to comply with the pass system.

PC rooms, restaurants, cafes, movie theaters, and sports stadiums are not included in the suspension of the pass system. The suspension will also be limited to facilities in the capital city as the court made the verdict in response to an injunction filed against Seoul Mayor Oh Se-hoon. It will remain effective for 30 days.