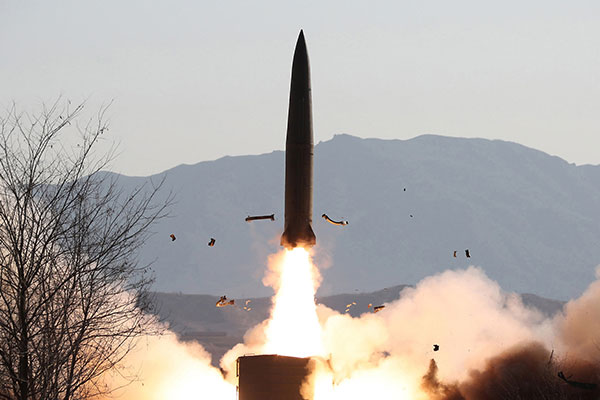 North Korea conducted two missile tests this week, firing what it claims was a hypersonic missile into the East Sea on Tuesday and two short-range ballistic missiles on Friday.

South Korea’s Joint Chiefs of Staff announced in a text message to reporters at around 7:30 a.m. on Tuesday that the North had fired an unidentified projectile into the East Sea.

The launch came six days after the North test-fired a ballistic missile into the East Sea from the northern province of Jagang, claiming it was a hypersonic missile.

.In a press release, the presidential office said the committee members expressed "strong regret" over the launch that came at a time when stability at home and abroad is indispensable.

They also assessed the motive behind Pyongyang launching its second projectile of the year following last Wednesday's missile test.

The members agreed to analyze details of the projectile through close coordination with the U.S., and to seek a response while keeping an eye on developments in the North.

North Korea on Wednesday said the launch was of a hypersonic missile, with the Korean Central News Agency(KCNA) reporting that North Korean leader Kim Jong-un oversaw the test-launch.

The KCNA said Kim highly assessed the achievements of scientists, technicians and officials involved in the missile research sector and stressed the need to further strengthen the North’s strategic military force and enhance the modernization of its army.

This was the third reported North Korean test of a hypersonic missile, after one on September 28 last year and another last Wednesday. Kim did not attend the previous launch.

While expressing doubt regarding Pyongyang’s claim over last week’s launch, the South Korean Joint Chiefs of Staff(JCS) on Tuesday assessed that the latest missile traveled at a maximum speed of Mach Ten, a quality of a hypersonic missile.

Following that launch, the United States on Wednesday imposed sanctions on North Korean and Russian entities.

The U.S. Treasury said on Wednesday that the sanctions were imposed on six North Koreans, one Russian and a Russian firm responsible for procuring goods for the North's weapons of mass destruction and ballistic missile-related programs.

It added that the steps aimed to prevent the advancement of North Korea's programs and impede its attempts to proliferate weapons technologies.

Most of the sanctioned North Koreans reportedly work for the North's Academy of National Defense Science, formerly the Second Academy of Natural Sciences, which the Treasury says is heavily involved in the North's military defense programs.

The sanctioned individuals are said to have procured parts and goods from Vladivostok in Russia and China.

On Friday morning, North Korea warned that it will have a "stronger and certain reaction" after the United States slapped sanctions over the North's recent missile tests.

In a statement carried by the Korean Central News Agency on Friday, a spokesperson for the North's foreign ministry defended its missile tests as the country's legitimate right to self-defense.

The statement said the U.S. accusation over the North's legitimate exercise of the right is an "evident provocation and a gangster-like logic."

It also criticized Washington for intentionally escalating the situation by imposing new sanctions, adding that while the U.S. talks of diplomacy and dialogue, it is actually absorbed in its policy of isolating the North.

While military authorities are reportedly analyzing details of the latest launch, the missiles were known to have registered low altitudes and traveled between 300 and 400 kilometers.

Some military experts suspect they may be KN-23, which was modeled after Russia’s Iskander missile, or a North Korean version of the U.S. Army Tactical Missile System (ATACMS).