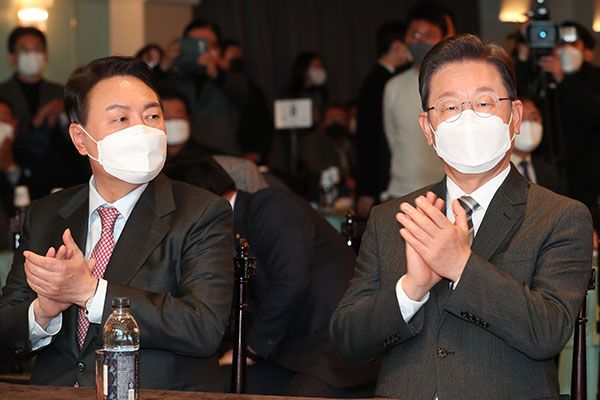 With less than 50 days until the March presidential election, a new poll shows the ruling Democratic Party's Lee Jae-myung and main opposition People Power Party's Yoon Suk Yeol in a fierce neck-and-neck race within the margin of error.

The KBS poll, conducted from Monday to Wednesday, asked one-thousand people which candidate they would vote for if the election was held the next day.

In the hypothetical race, Lee received 34-point-five percent, while Yoon garnered 33 percent, narrowing the gap which was as large as over ten percentage points in the previous poll earlier this month.

Yoon saw his rating jump by seven percentage points despite the recent controversy over phone recordings of a private conversation between his wife and a YouTuber.

The poll also asked which candidate people thought would win the election regardless of their own support. Nearly 47 percent of respondents chose Lee over Yoon, who had 37-point-four percent.

Lee maintains his lead by a large margin, but the gap significantly narrowed from a margin of nearly 30 percentage points two weeks ago.

About 38 percent of respondents wanted the ruling party to remain in power, while 54-point-five percent supported a transfer of power.

As for the current administration, the approval rating for President Moon Jae-in marked 44-point-five percent.

The poll by Hankook Research has a 95 percent confidence level with a margin of error of plus or minus three-point-one percentage points.