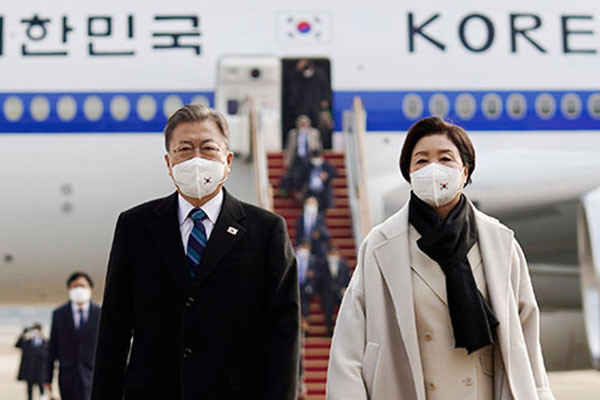 President Moon Jae-in returned home Saturday from a weeklong three-nation trip to the Middle East that was focused on bolstering diplomacy and defense cooperation.

In the United Arab Emirates, South Korea signed a four trillion won deal to sell midrange surface-to-air missiles to the Persian Gulf country in what is billed as the biggest single arms contract for Korea to date.

The phone conversation came after the UAE canceled the planned talks between the two leaders earlier on Monday citing an "unforeseen and urgent matter of state."

Presidential spokesperson Park Kyung-mee reported that in the 25-minute conversation, Moon said that although he did not meet the crown prince in person, he extended gratitude for the warm hospitality shown by the UAE prime minister to the South Korean delegation.

In particular, the president expressed condolences to victims of a deadly drone attack on a key oil facility and the international airport in Abu Dhabi on Monday. The attack, claimed by Yemen's Houthi rebels, killed three people.

The crown prince told Moon that the attack was anticipated and sought understanding for the canceled talks.

During talks in Riyadh on Tuesday, Moon said he is pleased to see bilateral defense cooperation making great strides and hoped negotiations to import South Korean defense goods would be fruitful, according to presidential spokesperson Park.

Moon said South Korea will cooperate as much as possible not just on exporting its weapons systems but also on technological transfers so the production of weapons within Saudi Arabia is possible.

The president’s remarks indicate that talks related to arms exports to Saudi Arabia are under way, although no details regarding the matter have been revealed.

In the summit, the two leaders discussed negotiations for South Korea's export of K-9 self-propelled howitzers to Egypt.

In a joint statement following the summit, Moon said that the two leaders agreed that the ongoing negotiations for the K-9 deal will contribute greatly to strengthening the Egyptian military’s capabilities. Additionally, the technology cooperation and local production of the howitzer will be a model case of mutual cooperation.

Moon added that the two leaders agreed to jointly work to complete the deal.

Now back home, Moon is expected to focus on state affairs at the end of his term in office. COVID-19 response is high on the agenda as omicron will likely soon become the dominant strain requiring changes to quarantine and medical protocols.