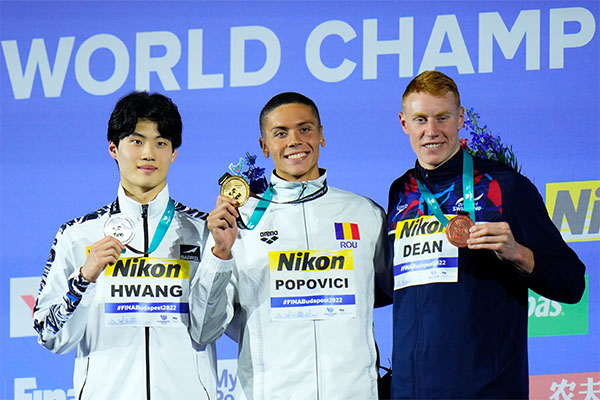 Teen swimmer Hwang Sun-woo won the silver medal in the men's 200 meter freestyle at the world championships, becoming the second South Korean to win a medal in the event.

The 18-year-old swimmer finished second with a time of one minute 44-point-47 seconds in the final of the men's 200 meter freestyle at the FINA World Championships in Budapest, Hungary on Monday.

Hwang set a fresh South Korean record less than one year after breaking the Korean record in a qualifier for the 2020 Tokyo Olympics.

Hwang's silver marks the best performance for a South Korean athlete in the men's 200-meter freestyle. The previous best performance was Park's bronze in the 2007 world championships in Melbourne.

Team Korea also posted a new national swimming record after coming in sixth in the final of the men's four-by-200 meter freestyle relay at the FINA World Championships in Budapest.

The four-member team, comprising Hwang Sun-woo, Kim Woo-min, Lee Yoo-yeon and Lee Ho-joon, finished sixth on Thursday with a record time of seven minutes and six-point-93 seconds, one-point-56 seconds faster than the previous national record. The team had set the previous record in the event's heat earlier in the day.

Thursday marked the first time South Korean swimmers advanced to the finals of a relay event in the world championships.