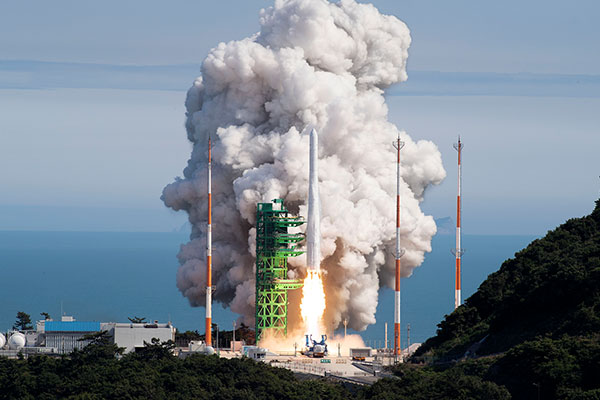 Science and ICT minister Lee Jong-ho on Tuesday confirmed the success of Nuri's launch and its deployment of a satellite into orbit. The rocket lifted off from the Naro Space Center in Goheung, South Jeolla Province, at 4 p.m.

According to the ministry, a satellite aboard Nuri successfully communicated with the King Sejong research station in Antarctica about 40 minutes after the blastoff. The final confirmation that it is operating properly will be made 18 hours later, at around 10 a.m. Wednesday morning.

If the whole process is confirmed to be a success, South Korea will be only the seventh country in the world to launch a satellite with domestically developed technologies.

South Korea initially sought to fulfill the goal last October, when the rocket successfully flew to a target altitude of 700 kilometers but failed to put a dummy satellite into orbit as its third-stage engine burned out earlier than expected.

The second attempt at the launch was scheduled for last Thursday, but the liftoff was postponed a day prior due to a technical glitch in the oxidizer tank sensor.

On Wednesday, a satellite deployed by the 200-ton Nuri space rocket successfully made its first two-way communication with its control center.

According to the science ministry and the Korea Aerospace Research Institute(KARI), the performance verification satellite and the KARI station in the central city of Daejeon made contact at around 3:01 a.m. on Wednesday.

KARI analyzed data received from the satellite through remote command, confirming that it is working properly. The two were able to sync up and activate the satellite's GPS transmitter.

South Korea's King Sejong Station in Antarctica made initial contact with the satellite following the successful launch of the Nuri rocket on Tuesday.

KARI plans to further monitor the satellite and stabilize its position for the next seven weeks before successively releasing four mini cube satellites or CubeSats starting next Wednesday.

During its two-year mission, the performance verification satellite will test the effieacy of three locally developed space technologies – the electrically heated thermoelectric generator, the control moment gyroscope and the S-band antenna.