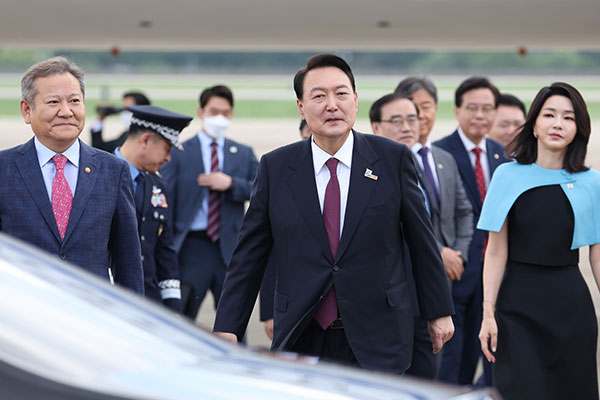 President Yoon Suk Yeol returned from a five-day trip to Madrid, Spain on Friday that included his participation in a North Atlantic Treaty Organization(NATO) summit and separate meetings with state leaders.

During more than ten rounds of bilateral and multilateral discussions, Yoon focused on diplomacy involving North Korea and economic cooperation.

The leaders of South Korea, the U.S. and Japan gathered for the first time in nearly five years on the sidelines of the summit, agreeing to strengthen cooperation in responding to North Korea's nuclear and missile threats.

President Yoonand his American and Japanese counterparts, President Joe Biden and Prime Minister Fumio Kishida, made the agreement on Wednesday in a trilateral summit.

In the first such meeting in four years and nine months, President Yoon said in his opening remarks that cooperation among the three nations has become ever more important in the face of growing nuclear and missile threats from North Korea and increased instability in the world.

Yoon also expressed hope that through the summit, the three-way cooperation will be established as a central axis for world peace and stability.

President Biden also stressed the importance of the trilateral cooperation, saying that it is critical in achieving the three countries' shared objectives, including the complete denuclearization of the Korean Peninsula.

Kishida agreed on the need for three-way cooperation, while expressing concerns about the possibility of the North engaging in additional provocations.

After the summit, Yoon's presidential office said the three leaders agreed that advances in North Korea's nuclear and missile programs pose a serious threat not only to the Korean Peninsula but also to the region and the world.

It added that the three sides agreed to hold close consultations on ways to strengthen the U.S.’ extended deterrence commitment to its allies and upgrade the level of trilateral security cooperation in responding to North Korea's nuclear and missile threats.

Speaking at the NATO meeting, Yoon urged the international community to pay attention to the North's denuclearization, and promised to enhance Seoul's cooperation with the 30-member security forum for world peace and freedom.