Koreans usually have a bowl of cooked rice, soup and side dishes for their regular meals. Bibimbap is cooked rice mixed with all the side dishes. It’s generally said that the origin of the dish lies in the old custom of mixing cooked rice with cooked vegetables for ancestral memorial services after the ritual. All the separate dishes are mixed in a huge bowl and it’s seasoned with a drop of sesame oil and seasoned sauces including soy sauce. In some regions, bibimbap is also dubbed the “ancestral memorial service dish.” During the Joseon Dynasty, bibimbap was called goldongban. Goldong means antiques and other various goods. So, the dish was called goldongban as various ingredients are mixed with cooked rice. Locals also used to enjoy the dish on the New Year’s Eve. 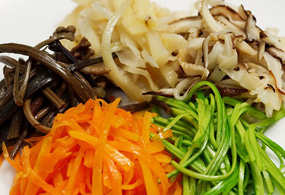 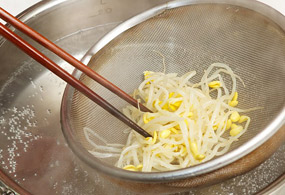 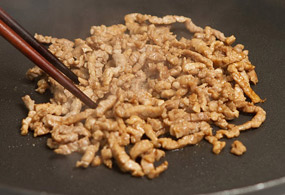 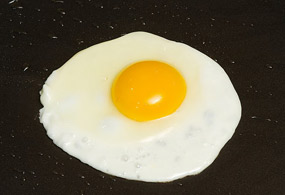 Fry an egg slightly so that it’s half-cooked and the shape is retained. 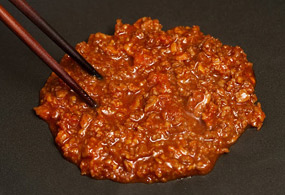 Mix all the ingredients for seasoned red pepper paste and stir-fry in a frying pan with oil until it becomes glazy. 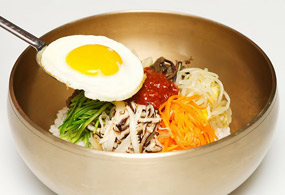 Put cooked rice in a large bowl and top it neatly with the stir-fried vegetables in order. Add a spoonful of seasoned red pepper paste in the center and finally top it with the fried egg.
☑ To prevent the stinky smell of bean sprouts when blanching, either put the lid on or uncover the pot throughout the cooking process.
☑ Season the meat before stir-frying to enrich the flavor of the meat and to make the bibimbap more delicious.
☑ Cooking beef for a long time will toughen it, so stir-fry it quickly on high heat, while vegetables should be cooked on medium high heat for about one minute.
☑ Mix bibimbap with chopsticks.
☑ If you can’t get summer squash, use zucchini; green bean sprouts can replace bean sprouts; and various mushrooms can be used instead of brackens or bellflower roots.
☑ Soy sauce can season bibimbap if red pepper paste is not available. 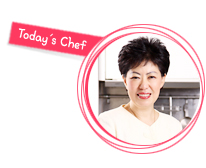