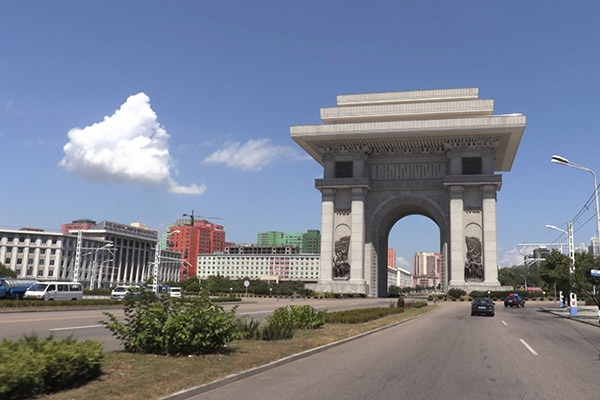 “Pyongyang Republic” is one of the terms associated with North Korea. It means that the capital city enjoys special treatment, from rations to key infrastructure, provided by authorities. Today, we’ll talk about why Pyongyang is considered so important in the North and what life there is really like with Hyun In-ae, a visiting professor for the Department of North Korean Studies at Ewha Womans University.

In North Korea, Pyongyang is defined as the holy place of independence, the heart of the Korean people and the capital of the Democratic People’s Republic of Korea.

Pyongyang is treated particularly well because it is just too much for North Korea to take care of every region. The North hopes to promote a more positive image of the nation by developing its capital at the very least. Pyongyang has also been known by locals as the place where their supreme leader lives. For them, it is only natural that such an important place should be treated differently and favorably.

When a provisional committee was established as the central administrative agency of North Korea in 1946, Pyongyang was separated from South Pyongan Province and became a special city. It was later classified as a directly-administered city so that it could grow into a center of politics, economy, society and culture.

In ancient times, Pyongyang was the capital of the ancient Korean kingdom of Goguryeo and was called Seogyeong during the Goryeo Dynasty. In North Korea, Pyongyang was developed as the capital of the revolution after the nation’s founder Kim Il-sung instructed his son Kim Jong-il in 1975 to rebuild the city. Then in 1998, the nation enacted a law concerning the management of Pyongyang.

The special treatment of Pyongyang is guaranteed by law. The Pyongyang City Management Law stipulates that the state shall invest everything including materials and funds into Pyongyang first. That means resources from all around the nation should be focused on the construction of Pyongyang and the benefits are enjoyed by its citizens. In a socialist state where commodities are in short supply, the best quality goods are provided to Pyongyang first. While the state-controlled rationing system has collapsed in North Korea, it is still working in Pyongyang, though only in part. To put it briefly, Pyongyang enjoys special benefits for everything.

Called the “heart of the revolution” by local people, Pyongyang is the symbol of the North Korean regime and an ideal place which the nation hopes to show to the outside world.

Citizen cards are issued to people living in the capital. By separating Pyongyang’s citizens from residents in other regions, the cards remind them that residing in the capital is a significant privilege. While residents in other areas must obtain a special travel certificate to enter the city, those with Pyongyang citizen cards are allowed to travel to neighboring regions without any certificate. The supply of electricity is relatively stable in Pyongyang and the rationing system was still in place in the capital even during the “Arduous March” period in the 1990s when more than a million people in the nation starved to death. But these privileges also come with duties.

Pyongyang’s citizens should serve as a model to people in other regions. Video footage shows numerous people on the roads welcoming visiting foreign leaders such as South Korean President Moon Jae-in and Chinese President Xi Jinping. Of course, they are all citizens of the capital. Students in Pyongyang often take part in mass gymnastics shows. They are all mobilized for the events without being paid. Citizens can be expelled from the capital if they do something wrong so they should behave extremely carefully and obey the rules. The people of Pyongyang enjoy benefits but also bear burdens as well.

Most foreigners who have visited North Korea agree that Pyongyang is pretty clean. In fact, the citizens of the capital are mobilized to clean their neighborhoods several months before international events or a foreign guest’s visit to the city. Meanwhile, students have to stop studying for months to prepare for mass gymnastics events, while office workers also frequently attend important events.

Pyongyang’s citizens show greater loyalty than people in any other region, due to the various benefits given to them. Only those with proper family backgrounds and devotion to the party and the leader are entitled to Pyongyang citizenship. Those with any flaws like a criminal record are disqualified. If citizens fail to participate in mass mobilization, they could be thrown out of the city.

High-ranking officials who loyally serve their party, government or military and the new class of wealthy businesspeople known as donju live in the capital, where the standard of living is quite high.

Rich people in Pyongyang live in large, luxury houses with a great view and eat at upscale restaurants, where they are said to spend up to 300 dollars on a single meal. In the past, citizens weren’t very interested in foreign brands. But since the 2000s, wealthy people have increasingly sought global brands in cosmetics and sportswear. Many citizens like to work out using imported exercise equipment. There are even services to help people lose weight and a variety of entertainment facilities. If you visit Pyongyang and hang out with a high-ranking official or rich person, you may wonder if you are in North Korea or South Korea. Pyongyang is turning into a place where one can fully enjoy an affluent life.

The Washington Post coined a new word “Pyonghattan” in 2016 to describe the lives of wealthy North Korean people. As indicated with the combination of the words “Pyongyang” and “Manhattan,” the lives of rich people in Pyongyang are beyond imagination.

There has also been a change in the way Pyongyang’s people dress. Previously, their outfits looked almost the same. But now, it is common to see women dressed in bright and colorful clothes and wearing high heels. You can also see people talking over mobile phones and moving around using taxis. However, since Pyongyang is developing fast, the polarization of wealth is also deepening.

Since North Korea is embracing the elements of a market economy, the widening gap between the rich and the poor is becoming a serious social problem. The phenomenon of “the rich get richer while the poor get poorer” is clearly seen in Pyongyang, where the wealthiest people in the nation live. There are also poor citizens who live in a slum area, but the city just can’t kick them out without any reason. In line with the high level of consumption, prices are quite high in Pyongyang. The high prices make the lives of poor citizens even more difficult and contribute to them feeling deprived.

Foreign visitors to Pyongyang may think that North Korea has changed a lot in a positive way, but the city can also expose the dark side of society like the gap between the haves and have-nots. Pyongyang is a miniature version of North Korea.

The area north of the Taedong River in Pyongyang is an affluent district where central agencies like the Workers’ Party and the Ministry of People’s Armed Forces are located, while the area south of the river is an urban slum where laborers live. An invisible barrier dividing the two sides of the river in Pyongyang is developing into a serious emotional issue of polarization, which is actually emerging in the entire nation.

The various benefits given to Pyongyang and the introduction of a market economy may make people believe that the North Korean economy has improved, at least on the surface. But the capital city lays bare the fact that regional disparity will only widen without comprehensive reform measures.

(Next week, we’ll examine the Wonsan area in North Korea, which the nation is working hard to develop.)