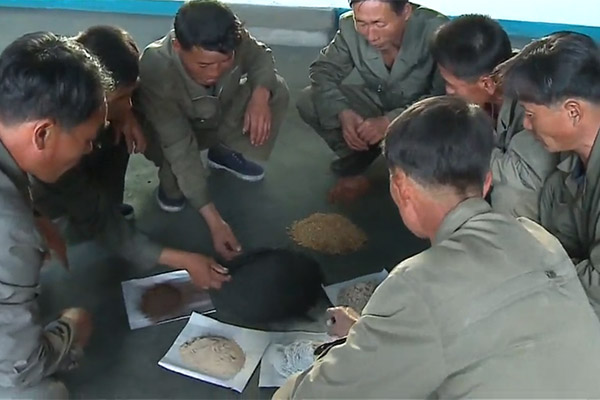 A cold wave swept across South Korea last week, prompting people here to prepare heating devices such as electric heaters and blankets as well as hot water circulation mats. Some install heating tents in their houses to feel warm and cozy, while insulation air caps that prevent cold wind from blowing through small gaps in widows are selling well.

Today, we’ll talk about how people in North Korea keep warm during the cold winter months, which are colder and longer than the South with Professor Chung Eun-chan at the Institute for Unification Education.

In Ryanggang Province in the northern part of North Korea that borders China, subfreezing weather continues throughout the winter. When it snows a lot, waist-high snow blankets the area and it is difficult to even walk on compacted snow. In a word, it is freezing cold in North Korea.

North Koreans say that they need three things to survive—rice, water and heat.

For them, heating is a very important part of life, as they have to endure a long, cold winter.

In North Korea, the first snow falls as early as late September. In the Junggangjin area along the Amrok River on the border between North Korea and China, the temperature fell as low as minus 44 degrees Celsius in 1993.

During the winter months, it is challenging to secure rice, water and heat—the three things that are indispensable to survival in the North. Rice harvested from the past autumn is not enough to last through the long winter, while water pipes which do not work properly even in normal times, easily freeze in the cold. Heating facilities are not adequate, either. It is not easy to stay warm during the winter even in the capital of Pyongyang.

In Pyongyang, hot water from a thermoelectric power plant in the Pyongchon(평천) district is used to heat some apartments. But many other apartments lack a heating system. Residents sleep in thickly padded clothes or move to their relatives’ houses which are equipped with heating facilities during the winter.

There are various reasons for the lack of sufficient heating facilities in North Korea. Raw materials are scarce, and iron pipes are installed sparsely when constructing the heating system. Stones are known to hold heat, but they are replaced by wood pieces so completed buildings do not store heat effectively.

Wealthy people tend to get modern heating devices from China or South Korea, but those who can’t afford to do so restore the traditional Korean floor heating system known as ondol.

But the power plant has not worked normally, and its electricity is only supplied to apartments in the Pyongchon district where party officers reside. Even if electricity is supplied, hot water pipes are so outdated that homes are not heated properly.

Therefore, most Pyongyang citizens wear heavy sweaters, underwear and socks even inside their homes, and family members all sleep together in the warmest room, although the room may not be big enough. Alternatively, some choose to “seek shelter” at the heated houses of their relatives. So many people want to move to their relatives’ houses in other regions, giving rise to brokers who introduce them to temporary housing and receive fees in return. To ease the heating problem, some people attempt to remodel their apartments in secret. In fact, the problem of inadequate heating facilities is more serious in rural areas.

Single-family homes and low-rise apartments in small cities in North Korea use the ondol heating system, meaning that they need to burn coal. Of course, local residents have to purchase coal. But many of them give up heating their homes due to the high market prices of coal.

It is assumed that 4.5 billion tons of coal, including brown coal and anthracite coal are buried in North Korea. But coal is exported to earn foreign currency. It is also difficult to transport the coal produced from local mines to other regions due to the nation’s poor traffic infrastructure. For these reasons, North Korean residents do not really benefit from coal.

In contrast to South Korea, where the gas heating system has become common, most North Korean people, except those living in big cities depend on coal for winter heating. North Korea holds a large amount of coal deposits. Residents in coal-producing provinces such as South Pyongan, Hamgyeong, Jagang and Ryanggang heat their houses by burning brown coal and anthracite coal. But people living in other regions cannot use coal as much as they want because the major purpose of coal production is exports. As Ms. Chung explained, it is not easy to carry coal by rail to coal briquette factories because trains are not provided with proper electricity. That’s why coal prices tend to double in regions other than coal-producing areas. Although North Korea is rich in coal, many local residents cannot afford to use the high-priced fuel. They resort to using firewood instead, but the situation is not good, either.

In the past, factories and enterprises used to provide coal to their workers. But after the coal supplies stopped, individuals had to resolve the fuel problem on their own. They began to cut trees on state-owned mountains to collect firewood. As illegal tree-cutting became rampant, forestry officials started clamping down on the practice from November. But in many cases, the crackdown proved ineffective because the officials received bribes and turned a blind eye to the problem.

After coal supplies came to a halt in the mid-1990s, many North Koreans gathered firewood in forests and mountains, which as a result, suffered from severe deforestation. At the time, it was common to see children in rural villages coming down the mountain, dragging tree trunks or carrying firewood on their backs to help out their parents.

North Korea has pushed for reforestation since Kim Jong-un came to power, but the North’s mountains are still barren. To prevent logging, the North Korean media has urged people to use alternative fuel. Some citizens are turning their eyes to solar-powered heating. A few high-ranking officials and affluent families use Chinese solar panels or even South Korean ones that have been smuggled through China.

Formerly, electricity prices in North Korea were pretty low. But the nation raised the prices in the early 2000s, making people feel burdened by their electricity bills. If they save the money needed to pay the bills and get a solar power generator instead, they can resolve the electricity problem. Using this logic, more and more homes these days are installing solar panels on their roofs to meet energy demands on their own.

Of course, this will be helpful for heating.

However, not all North Koreans can benefit from solar energy as people simply can’t afford to buy solar panels. I think North Korean authorities should make more efforts to resolve the heating issue.

North Korea is spurring efforts to develop renewable energy, represented by solar heat, in order to address the problem of its chronic power shortages and poor heating infrastructure. But renewable energy only makes up an insignificant portion of the nation’s power supply. While the cold winter has just started, North Korea’s heating facilities are far from enough. For people in the North, winter is the most painful season of the year and the period they wish to pass as quickly as possible.

(Next week, we’ll talk about Christmas in North Korea.)