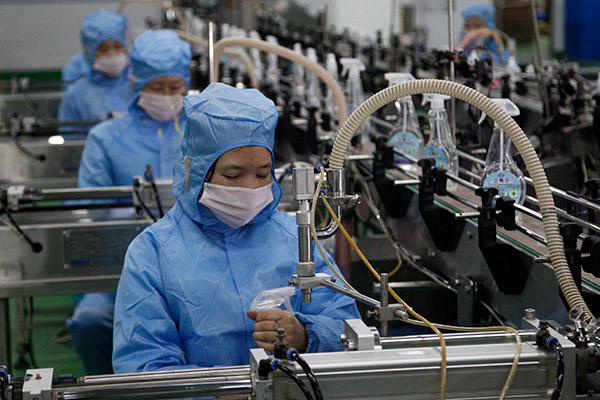 It’s been two months since North Korea began to make an all-out effort to keep COVID-19 at bay. The virus was first mentioned in its media on January 21. Three days later, the nation declared the launch of a national emergency system against the highly contagious disease. It has completely shut down its border with the outside world since January 31, suspending all international flights, train services and shipping.

North Korea claims that it has no confirmed cases of the virus yet. But it has postponed the new school year twice, as many virus-affected countries did, and passengers are prohibited from using public transportation without wearing masks. Given that, many speculate that the virus has already spread in the North.

On March 13, Gen. Robert Abrams, the commander of U.S. Forces Korea, said that he was fairly certain North Korea had COVID-19 cases, noting that the North Korean military had been on lockdown for 30 days. So, has the virus indeed reached the reclusive state? To answer the question, here is Lee Joon-seok, a North Korean defector who resettled in South Korea in 2014 and now serves as a researcher at the University of North Korean Studies in Seoul.

It is well known that North Korea’s medical infrastructure is very poor. It ranked 193rd out of 195 countries in the 2019 Global Health Security Index released by the Johns Hopkins Center for Health Security. Due to inadequate medical facilities, equipment and medicines as well as poor hygiene in North Korea, many local citizens have died of illnesses, including infectious diseases such as tuberculosis and typhoid, and aren’t able to get proper diagnosis or treatment.

I suspect that North Korea is keeping its COVID-19 outbreak a secret. The virus broke out in China last November, and the North closed its border with China in late January. During that time, I imagine countless smugglers operated along the border between the two countries. That is, numerous North Korean people traveled to and from China officially and unofficially right before the border closure. Given that, I doubt North Korea’s claims that it does not have a single confirmed case of the virus.

As the international community has become highly wary of COVID-19, North Korea has taken drastic steps to enhance quarantine on transportation routes to the outside world like ports and border areas. According to the Rodong Sinmun, which is the official newspaper of the North’s ruling Workers’ Party, the authorities provided protective clothing, quarantine gear and disinfectants to ports and border regions for the responsible inspection and disinfection of inbound travelers and imported products.

The new guidelines set by the North Korean authorities focus on blocking COVID-19 from entering the country from the outside. The guidelines specify the standards of disinfectants and protective suits as well as different methods of sanitizing trains, trucks and ships.

The North Korean government has repeatedly stressed its quarantine measures through the state media. In reality, however, it is difficult to actually carry out the measures. In response to the outbreak of the Severe Acute Respiratory Syndrome or SARS in 2003, North Koreans simply held garlic juice in their mouths. That’s what they believed to be disinfection. This time, too, I don’t think there are enough disinfectants in the North. Perhaps, protective clothing was hurriedly brought in to the country from China. North Korean TV or newspapers have shown intensive quarantine efforts. But they are mostly used for propaganda purposes. In practice, it is difficult for officials to actually use quarantine gear.

Internally, North Korea appears to be quite busy with anti-virus efforts. The Rodong Sinmun newspaper says that emergency measures are underway across the country to prevent COVID-19 from entering and spreading in the North. It also claims that remarkable achievements have been made in the development of cures, masks and air sterilizers, indicating that the North is responding to the virus successfully, compared to South Korea. But researcher Lee is questioning whether that can be true.

The newspaper says that thorough disinfection takes place at barbershops and hair salons, where all supplies undergo ultraviolet disinfection and air purifiers are sterilized separately. But I would guess only a handful of such places in the entire country are equipped with air purifiers.

On February 25th, North Korea reported that local medical institutes and the Department of Pharmacy at Pyongyang Medical School were conducting clinical tests of medicine for COVID-19. It also said that the nation successfully developed a new mask and an ultrasonic aerosol generator, which it claimed will help prevent and cure respiratory diseases when activated with salt water, garlic juice and antibiotics.

But it would be fair to say that all reports shown in the North Korean media strictly follow the guidelines issued by the Workers’ Party’s Propaganda and Agitation Department.

In an effort to contain the virus, North Korea has made it mandatory for its people to wear face masks. Since early last month, news photos have shown local residents wearing masks. But the masks in the photos look rather strange. White masks do not show light and shadow, and the way the mask contacts the face looks unnatural, making observers believe that the images were photo-shopped. If it is true, we can assume that North Korea has difficulty securing enough masks.

Obviously, it is hard for North Koreans to obtain face masks. North Korea claims that a number of clothing factories across the nation produce tens of thousands of masks every day to meet the demand.

However, North Korea has been under harsh international sanctions, while its trade with China has almost been suspended, due to fears over the spread of the deadly virus. It is only natural that the North has difficulty securing materials needed to produce masks. Except for high-ranking officials, businesspeople engaging in trade and medical staff, I guess citizens, generally speaking, wear masks they made themselves from worn-out clothes. Of course, those masks aren’t hygienic nor functional.

Some analysts say that North Korea managed to stem the spread of the virus through radical preventative measures in the early stage.

They note that North Korea had carried out very few exchanges with the Chinese city of Wuhan, where the virus originated, and shut its border with China quickly. Also, traveling is highly restricted in North Korea, where the possibility of group infections is rather low. Moreover, North Korean soldiers have participated in military drills lately. Citing these factors, the analysts think that the virus situation is not very serious in North Korea. But researcher Lee does not agree with this opinion.

While its border is tightly sealed for now, it is impossible to stop smugglers from crossing the border as they risk their lives for survival. They have connections with border guards, who receive dollars or yuan in return for turning a blind eye to them. It is not possible, either, to place all suspected patients under quarantine and cure confirmed patients, considering the nation’s ill-equipped medical system. Even if there are deaths linked to the virus, the communist state won’t disclose them, as it boasts that its socialist healthcare system is the most advanced in the world. No matter how many infections or deaths it may see, North Korea needs to truly show the country under Kim Jong-un’s great leadership and its excellent healthcare system that has protected the country and the people from the global pandemic.

Efforts focused on preventing a virus from entering the country, including a border closure, could be effective in the early stage. But once the virus has spread, a quarantine system like this has limitations.

If the infectious disease spreads in North Korea, the situation may evolve in an unpredictable way. To reduce such an undesired risk, at least, it will be necessary for the two Koreas to build a cooperative system in the healthcare area.