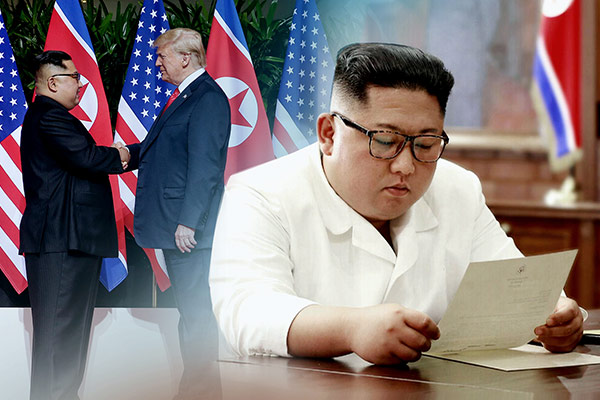 North Korea has strongly denounced U.S. Secretary of State Mike Pompeo. In a statement released in the name of a new Foreign Ministry director in charge of negotiations with the U.S. on Monday, Pyongyang accused Pompeo of making thoughtless remarks, which made it lose interest in dialogue with Washington. North Korea was taking issue with Pompeo’s remarks in a press conference after his teleconference with the G7 countries’ foreign ministers on March 25. Here is political commentator Lee Jong-hoon to explain what Pompeo’s comments were all about.

In a press conference after the meeting of G7 foreign ministers last week, Pompeo said that the G7 and all nations must remain united in calling on North Korea to return to negotiations and stay committed to applying diplomatic and economic pressure on its illegal nuclear and ballistic missile programs.

In fact, Pompeo talked about other issues as well, including health risks associated with COVID-19, diplomatic concerns related to Russia’s annexation of the Crimean Peninsula and Iran’s possession of nuclear weapons. The top U.S. diplomat called for cooperation of G7 to respond to these issues, and the North Korean issue was also brought up. Regarding North Korea’s recent missile provocations, he was apparently mentioning the principle of dealing with the communist state. I think North Korea overreacted to Pompeo’s comment on purpose.

North Korea criticized Pompeo for slandering the regime and said that it would go its own way. Using its typical harsh rhetoric, the North said the U.S. would be hurt if it makes any attempt to provoke North Korea. Commentator Lee continues to explain.

In the statement, North Korea said that it dropped its interest in dialogue with further conviction after hearing Pompeo’s reckless remarks. It also pointed out the U.S. president contained a sincere aid plan about the COVID-19 outbreak in a personal letter sent to the North Korean leader. But in front of the international community, the U.S. Secretary of State was hurling verbal abuse at the country, with which his president is hoping to build a cooperative relationship.

The North also said that Pompeo was going against the will of Trump and their differences made Pyongyang misjudge who is the real leader in the U.S. I think North Korea, in a sense, was seeking to drive a wedge between Trump and Pompeo.

On the surface, the statement seems to dismiss the possibility of resuming North Korea-U.S. dialogue. But analysts say it implies more than that. The statement was released by a new, unnamed department director of North Korea’s Foreign Ministry in charge of talks with the U.S. This unfamiliar post was mentioned in the nation’s state media for the first time. Many analysts say the creation of a new department handling negotiations with the U.S. indicates that North Korea is still committed to talks with the U.S., contrary to its claim.

It is very unusual that a statement was issued in the name of the new department director. In fact, the North Korean leader has shown a conciliatory attitude to the U.S., while lately his officials have churned out aggressive remarks against the U.S. I think the recent statement follows this pattern. North Korea’s Foreign Ministry already has the North America Department. No doubt, a department in charge of negotiations with the U.S. has been newly launched. If the North really plans to give up on dialogue with the U.S., it didn’t have to establish a new department tasked with negotiations with the U.S. In other words, North Korea wants to keep dialogue momentum going.

About three hours after North Korea announced the statement, Pompeo expressed his position once again. He reiterated Washington’s commitment to dialogue with Pyongyang and said that the U.S. stands ready to give humanitarian aid to the North to help the country fight COVID-19. But he also said that sanctions on North Korea would still remain in place, revealing widely different views between the two countries.

Pompeo is also using a two-track strategy on North Korea. He said that the U.S. has been trying very diligently to move forward with the negotiations and hopes that it will get an opportunity to do so. That means Washington wants to continue to engage in dialogue with Pyongyang in the future. Pompeo stressed Washington’s earlier position, once again, that North Korea should return to the dialogue table. Both sides are making efforts to keep their dialogue going.

North Korean leader Kim Jong-un’s absence in the test-firing of projectiles on Sunday is interpreted as part of efforts to stick to dialogue with the United States. The leader is not seen in photos of the projectile launch in North Korea’s newspaper. Many speculate that North Korea is seeking to raise its bargaining power for future negotiations with the U.S.

Kim Jong-un may have concluded that he wouldn’t necessarily have to upset the U.S. and South Korea by showing up at the weapons test scene, especially having the U.S. in mind. The leader has attended similar tests on and off, in an apparent move to show that he is not really at the forefront of the provocations.

Some speculate that North Korea’s recent series of projectile launches were aimed at the domestic audience. Many suspect that COVID-19 has already spread throughout the country. The North may have resorted to short-range projectile launches as part of efforts to ease growing public jitters over the infectious disease. I think the provocations have multiple purposes.

North Korea launched projectiles on four different occasions in March alone. It is widely believed that the North continues to test tactical weapons system before deploying it for actual combat use. North Korea may possibly make additional provocations on April 15, the birthday of the nation’s founder Kim Il-sung, as the country has often staged armed provocations around the so-called Day of the Sun.

North Korea will not just sit idle around April 15. The point is how strong the provocation will be. If Kim Jong-un decides to end dialogue with Trump and South Korean President Moon Jae-in and return to his nation’s brinkmanship tactic, the North might launch a long-range missile.

Considering Kim’s latest diplomacy, however, he is likely to choose low-intensity provocations aimed at drawing attention from the U.S. and maintain dialogue momentum with the U.S. and South Korea. On the assumption that the COVID-19 situation is pretty serious in the North, the impoverished nation needs help from the outside world. Perhaps, behind-the-scenes dialogue could be underway. If that is true, it will be all the more difficult for North Korea to make high-intensity provocations.

North Korea will convene the Supreme People’s Assembly on April 10 to bring together nearly 700 people from around the country. Ahead of the Day of the Sun, Kim Jong-un would hold the assembly and make important decisions to strengthen the status of his country. Attention is drawn to the message the North Korean leader will announce at the upcoming event, in regards to the nation’s recent provocations and statements.