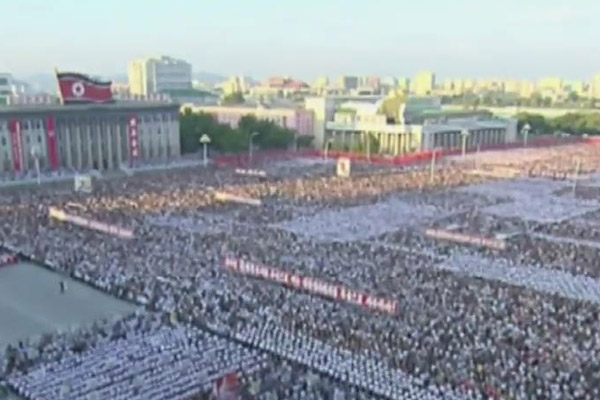 Next Thursday, June 25, will mark the 70th anniversary of the outbreak of the Korean War. It is remembered by South Koreans as a tragic day when North Korea invaded South Korea. How about people in the North? Every year, North Korea marks the occasion in a big way, holding massive anti-America rallies and severely criticizing the U.S. Today, we’ll learn about how North Korea perceives the Korean War from Professor Chung Eun-chan at the Institute for Unification Education.

The period between June 25 and July 27 is designated by North Korea as a month of anti-U.S. struggle. The Korean War broke out on June 25, 1950, and the Korean War armistice was signed on July 27, 1953. North Korea celebrates July 27 as the day of victory. During the period, North Korea instills anti-U.S. sentiments among local people, who are required to watch movies denouncing the U.S., documentaries and art films. The nation also holds large-scale rallies against the U.S. Through these events, North Korea stresses that it is South Korea that started the Korean War under the influence of the U.S. It also argues that the North won a great victory in the three-year war and humbled the pride of the arrogant U.S., thanks to Kim Il-sung’s brilliant military strategies and tactics.

We’ll have to wait and see how North Korea will commemorate this year’s anniversary of the outbreak of the Korean War and how the local media will cover the event, amid the prolonged COVID-19 crisis. North Korea claims that the U.S. and South Korea made a surprise attack on North Korea to start a war, which eventually ended in North Korea’s victory. Why does North Korea make such a claim?

There are three main reasons. First, North Korea denies that it was an aggressor. If it admits its invasion of South Korea, it is subject to U.N. sanctions because the attack is an act of violating U.N. regulations. Second, Pyongyang claims that its victory in the war was attributable to the great leadership of its founder Kim Il-sung. By underlining this, North Korea seeks to shore up internal unity. Third, North Korea wants to stress the legitimacy of the regime and show to the outside world that it is a normal country, not an aggressor nation. That is, the communist state emphasizes that it advocates peace and does not pursue unification by force.

However, North Korea’s claim proved to be false through the Soviet archival material that was unveiled in the mid-1990s. According to the first-class confidential documents delivered by Russia directly to former South Korean President Kim Young-sam in 1994, Kim Il-sung’s plan to attack South Korea was approved by the Soviet Union and China after dozens of requests. The documents indicate that at the time of the Korean War, South Korea’s military force was absolutely weaker than North Korea’s. In addition, Operation Order No.1 of the North Korean 4th Division includes a specific plan about a preemptive strike against South Korea. These provide clear and documented confirmation that North Korea invaded the South.

In 1994, then-South Korean President Kim Young-sam visited Russia to hold talks with his Russian counterpart Boris Yeltsin. After the talks at the Kremlin Palace in Moscow, Yeltsin said he had a gift for the South Korean president. It turned out that the gift was a copy of the Soviet classified documents totaling 548 pages. The collection includes a detailed chronological description of what the Soviet Union and North Korea’s Foreign Ministry discussed from January 1949 to August 1953. It also says that the Korean People’s Army in North Korea launched its operation, “storm,” which was an all-out attack on South Korea, at 4 a.m., June 25, 1950, and crossed the 38th parallel. North Korean troops occupied Seoul in just three days and invaded further south to attack all across South Korea. Afterwards, the U.N. troops participated in the war, and the South Korea and U.N. forces carried out a surprise amphibious landing at Incheon. North Korean troops had to retreat, but Chinese intervention followed. All these procedures of the Korean War are stated in the Soviet confidential documents.

But why does the North Korean regime stick to its claim that the South invaded the North and continue to stoke anti-U.S. sentiment?

Externally, North Korea seeks to pressure the U.S. and tarnish its image in a move to elicit some response from it and eventually draw the U.S. to the negotiation table. Internally, it continues to highlight what the U.S. had done to North Korea and how the former leader confronted it. In doing so, it tries to bring to light the leader’s historical achievements and strengthen domestic solidarity.

Current leader Kim Jong-un inspected the Ryu Kyong-su Tank Division on New Year’s Day in 2012 for his first on-the-spot guidance in his first year in office. The division is known by North Koreans as the first military unit to roll into Seoul and capture the South Korean capital during the Korean War. It shows that the leader actively uses the Korean War as a means of regime maintenance. The following year, North Korea held a grand opening ceremony for the Victorious Fatherland Liberation War Museum after major renovations. It also restored the place where Kim Il-sung organized the Supreme Command during the war, in another effort to highlight the former leader’s wartime achievements.

In this way, North Korea has been working hard to maintain its regime and build a cult of personality for its former leader, even distorting the facts about the war. But these efforts are bound to face limitations.

Over 80 percent of North Koreans who belong to the older generation firmly believed what the authorities taught. Through the state rationing system, the authorities controlled them financially, gave them ideological education, brought them together politically and blocked outside information from flowing in to the country.

But the younger generation, also known as the jangmadang generation, is completely different. They value what they have seen, heard and experience themselves more than regime propaganda. They are used to compare outside information they obtained themselves to what the North Korean regime is really like. Naturally, many of them question the authority of the local reports about the Korean War and try to find out the truth. Of course, North Korea will continue to repeat the same claim about the war. But I think the propaganda efforts will face limitations.

In the predawn hours of June 25, 1950, North Korean troops launched a surprise invasion of South Korea to ignite the tragic, fratricidal Korean War. The war stopped long ago, but the pain of national division still lingers.