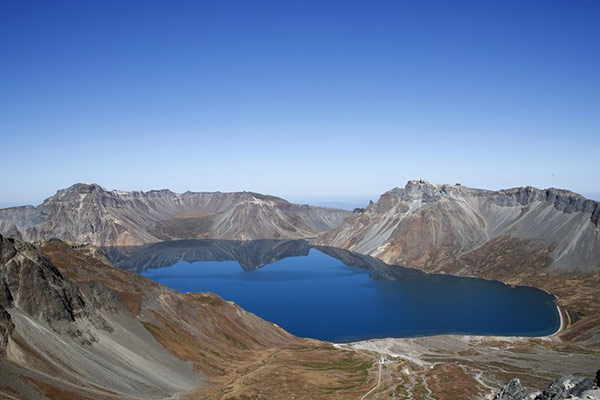 On May 31, North Korea’s official Korean Central News Agency said that the Mt. Baekdu area is drawing the attention of the international geological circles for its rich biodiversity and geological significance. The news agency also said that North Korea applied for the enlistment of the mountain as a UNESCO global geopark last year. As indicated in the report, North Korea is seeking to receive UNESCO global geopark certification for Mt. Baekdu.

Today, we’ll learn more about the mountain and North Korea’s efforts toward the UNESCO inscription from Professor Chung Eun-chan at the Institute for Unification Education.

North Korea has made constant efforts to have Mt. Baekdu listed as a UNESCO global geopark. This is in effort to attract tourists to the mountain that displays natural beauty and spectacular scenery. In its application submitted to the UNESCO headquarters, North Korea specifies the mountain’s area, location, climate and geographical conditions. It also says that it has transformed Samjiyon City, located at the foot of the mountain, into a model of civilization based on industry-academia cooperation.

The mountain is located partly in North Korea’s northern Ryanggang Province and partly in Jilin Province in northeast China. The Kim Jong-un regime has put a great deal of effort into developing the region.

North Korean leader Kim Jong-un has inspected Samjiyon several times since he instructed the development of the area in 2016. It is cited as one of North Korea’s major tourist zone development projects, along with the hot-spring spa in Yangdok and the Wonsan-Kalma coastal tourist area.

It appears that North Korea seeks to have Mt. Baekdu registered on the UNESCO list of world geoparks to gain international recognition first and then speed up the process of turning the mountain into a major tourist attraction.

North Korea hopes to develop Samjiyon into a model city and draw tourists to Mt. Baekdu. This is Kim Jong-un’s ambitious project. A second-stage development has been completed, and the third stage’s construction began early this year. The nation aims to complete the development of Samjiyon by October 10th this year, which will mark the 75th anniversary of the foundation of the ruling Workers’ Party.

The leader himself has expressed gratitude to construction workers, while the Rodong Sinmun newspaper has highlighted the project. It reflects how enthusiastic North Korea is about this development project, which shows the leader’s vision to boost the economy through tourism.

The volcanic Baekdu Mountain draws many tourists every year, thanks to its world-famous geological features and ecological value. Tourists can learn about the life and culture of the local people in three provinces of northeast China, including those in the Yanbian Korean Autonomous Prefecture in Jilin Province. They can also see the relics of Korean independence fighters during Japanese colonial rule. For South Korean tourists, major sites include the pine tree in the Chinese city of Longjing, the center of Korea’s fight for independence during the colonial period. It also includes the birthplace of renowned Korean poet Yun Dong-ju, known for his lyric and resistance poetry. On top of that, the site also contains historical sites of the ancient Korean kingdom of Goguryeo.

For Korean people, Mt. Baekdu is not just a tourist site with cultural and historical significance but is regarded as a sacred mountain. It is the highest mountain on the Korean Peninsula. Janggun(장군) Peak is the mountain’s tallest peak, which is 2,750 meters above sea level. In fact, the mountain has about 16 different peaks that are higher than 2,500 meters above sea level.

This mountain is the starting point of the Baekdu Daegan, which is a chain of ridges and peaks stretching through the Korean Peninsula from Mt. Baekdu to Mt. Jiri in South Korea. It is also the origin of the mythology of Dangun, the founding father of Korea. The peak of the mountain is covered with snow about eight months of the year. In fact, the word “Baekdu” means “white head.” For Koreans, the mountain has great significance in many ways.

Mt. Baekdu is a valuable tourist resource. On top of that, North Korea uses it as a means of creating the personality cult of three generations of the late founder Kim Il-sung’s family. In the North, the mountain is propagandized as a place for Kim Il-sung’s armed resistance against the Japanese during the colonial era, in an apparent bid to justify the nation’s one-man rule. North Korea also claims that Kim Il-sung’s son Kim Jong-il was born in a secret camp at Mt. Baekdu to legitimize power succession. However, Russian accounts indicate that he was actually born in the former Soviet Union. Kim Jong-il’s son and current leader Kim Jong-un has continued to stress that he belongs to the Baekdu bloodline, which refers to the ruling Kim family, to strengthen the power of sovereignty of his bloodline. He has climbed the mountain on multiple occasions before making major policy decisions.

Mt. Baekdu has a symbolic meaning for North Korea’s regime maintenance. First, North Korean people believe that their nation was established and has been maintained by the Baekdu bloodline to this day. Second, the mountain is not only regarded as the spiritual home of Korean people but a holy place associated with North Korean leaders who have become demigods. Highlighting Kim Il-sung’s anti-Japanese struggle around the area, North Korea stresses that he is a great leader who contributed to liberating Korea from Japanese colonial occupation.

China has been very keen on the development of this mountain, actively seeking to construct an international ski resort and airport in the area. But China pushed ahead with these development plans without discussion with North Korea, generating controversy. Many suspect that China is attempting to inscribe the mountain on the UNESCO lists for global geoparks and natural heritage alone. China actually writes the name of this mountain as “Changbai” on world maps, just as Japan uses the word “Takeshima” when referring to the Korean islets of Dokdo. North Korea and China, in fact, signed a treaty on the mountain border on October 12, 1962. At the time, the two countries agreed to share the crater lake, Chonji, on top of the mountain, with North Korea owning 54.5 percent and China, 45.5 percent.

For North Korea to effectively control Mt. Baekdu, it is important that the South and the North join forces.

This is a very important issue. To counter China’s move, it is absolutely necessary for the two Koreas to join hands to develop various tourism resources of Mt. Baekdu and turn it into a global geopark. Up to this point, South Koreans have typically visited Mt. Baekdu indirectly from the Chinese side. But it will be a lot better to open a direct air route to Samjiyon. Using Samjiyon airport, South Koreans can reach the mountain in just a few hours. The South and the North should pave the way for cross-border cooperation and exchanges.

Of course, North Korea’s decision and efforts are essential. To start with, scholars from both Koreas may conduct research on Mt. Baekdu and hold various academic meetings.

South Korean President Moon Jae-in and North Korean leader Kim Jong-un held high each other’s hands and smiled brightly atop Janggun Peak at Mt. Baekdu on September 20, 2018, the last day of their summit in Pyongyang. Many people may still remember the touching scene.

Mt. Baekdu is not merely a natural site as it is both historical and cultural heritage shared by South and North Korea. The two Koreas should hopefully carry out academic research in cooperation and come up with various policies to develop and preserve the mountain, which is considered the spiritual origin of the Korean race.