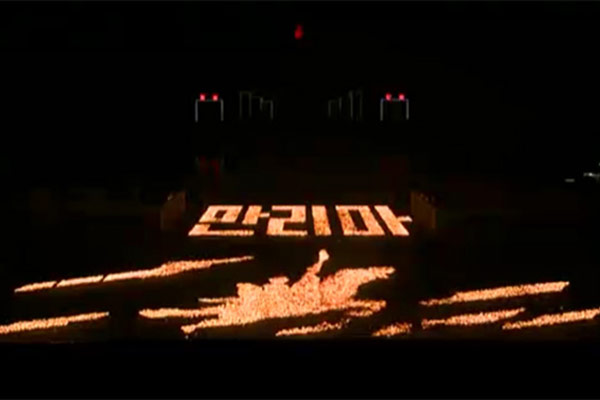 The word, Mallima, has been in the news a lot in North Korea lately. It refers to an imaginary horse that can travel long distances at extremely high speeds. The “Mallima Speed Movement,” is the latest adaptation of the “Chollima Speed Movement,” which is the nation’s representative mass mobilization campaign. Today, we’ll talk about why the strictly regimented regime places so much emphasis on the campaign of loyalty, or “speed movement,” with Professor Chung Eun-chan at the Institute for Unification Education.

The Chollima Movement was first proposed by North Korea’s founder Kim Il-sung at a meeting of the Workers’ Party in December of 1956. At the time, a new slogan “Let us dash forward in the spirit of Chollima” was also introduced.

After the Korean War armistice agreement was signed on July 27th, 1953, North Korea struggled to recover from the aftermath of the war and rebuild its economy. The nation was also in the process of completing its socialist system.

Against this backdrop, the Chollima Movement was launched as a postwar industrial campaign aimed at mobilizing people to accomplish important objectives.

Chollima refers to a mythical horse that can run at least 400 kilometers in a single day. North Korea introduced the Chollima Movement in the 1950s with the purpose of reconstructing the nation after the Korean War and resolving the shortage of capital, goods and technology as a result of the reduced assistance from the Soviet Union, by encouraging citizens to work harder. The speed movement unique to North Korea is aimed at fully mobilizing labor to maximize production in the shortest period of time possible.

After the nation successfully fulfilled its intended goals and achieved internal unity through the Chollima Movement, it continued to organize similar speed campaigns such as the “70-day battle” and the “100-day battle.” Today, the campaign of loyalty is still in place. At a party congress in 2016, North Korean leader Kim Jong-un proclaimed that an era of Mallima had opened. Since then, Mallima has established itself as the new speed battle in the nation.

The Mallima Movement is intended to produce tangible economic outcomes in the face of harsh sanctions imposed by the U.N. Security Council and build domestic solidarity. North Korea uses this speed campaign, just like the previous Chollima Movement, to push its people to produce economic results quickly in a desperate bid to overcome the crisis. But the new movement requires even faster speeds. “Chol” in “Chollima” refers to 1,000, and “mal” in “Mallima” means 10-thousand. So, Mallima is a much faster horse—ten times as fast as the original Chollima horse.

In 2013, one year after Kim Jong-un came to power, the leader stressed the policy of developing nuclear weapons and the economy at the same time. In 2016, he announced a five-year economic development plan.

And last year, Kim pledged to concentrate all efforts to reconstruct the economy, in a shift from his previous policy of the simultaneous pursuit of nuclear and economic development.

Since Kim’s proclamation of the Mallima era in 2016, speed campaigns have swept across almost all industrial fields across North Korea, with the slogan “Mallima” being chanted in steel mills and cement factories. The results of the Mallima Movement include automatic feeding machines at local ostrich farms, electronic money cards, electronic counters at stores and modern facilities used in agriculture, manufacturing and daily life.  North Korea publicizes its Ryomyong Street as a symbol of the Mallima era.

Ryomyong Street was proposed by Kim Jong-un in March of 2016 and the groundbreaking ceremony took place on April 3rd. A little over a year later on April 13th of 2017, the new street was completed. North Korea even invited foreign journalists to the completion ceremony.

The area in northeastern Pyongyang is an eight-lane street that stretches three kilometers from the Kumsusan Palace of the Sun to the Tower of Immortality. Future Scientists Street, another newly developed area that opened in 2015, houses a structure with more than 50 stories, while Ryomyong Street has condominiums as high as over 70 stories and public buildings. It is hard to believe that the massive development project was completed at such a whirlwind pace.

It took only one year to construct dozens of high-rise apartment buildings, schools and kindergartens in Ryomyong Street, a vast area covering 900-thousand square meters. According to the Land & Housing Institute in South Korea, eight million workers were mobilized to build Ryomyong Street, which is the result of 30-thousand laborers a day working double shifts around the clock without a holiday. North Korean authorities proudly call the street “a miraculous creation.”

For construction work, North Korea first uses young people who belong to an organization called the Speed Battle Youth Assault Troops with the mission of constructing industrial facilities like roads, factories and companies as well as residential buildings. But soldiers, college students and general citizens are mobilized as well, when necessary. Those who cannot participate in the labor campaign may have to offer money or other materials.

Since the severe economic contraction in the 1990s, many North Koreans have survived on their own through market activities. But they are often forced to join the speed campaign or offer money in the form of taxes. In those cases, they cannot earn money during the campaign period or cannot spend the money they earned for their family. It is easy to imagine that people are getting increasingly tired of the compulsory campaign and complain about it.

The speed battle, which is actually forced labor, is painful for North Korean residents. After graduating from high school, most North Korean youngsters hope to enter college. But if they can’t attend college for whatever reason, they enter military service. Those who can’t join the military are assigned to the Speed Battle Youth Assault Troops. Members of this organization are young and mostly come from poor backgrounds, so they are sent to various construction sites for hard labor. The group normally has 70 to 100-thousand members, but that figure grows to 200 to 300-thousand when large construction projects start.

In addition to the members of this group, countless residents are used as laborers to make up for insufficient construction materials and equipment. Some citizens are required to offer goods needed for construction. It comes as little surprise that the demanding campaign makes people’s economic situations more difficult. On another negative note, hasty construction projects in the speed battle, which is obsessed with quick results, may cause accidents.

It takes a certain period of time for cement paste or concrete to reach its full strength. If construction proceeds extremely fast, while not observing that period, the structure may crash. In 2014, an apartment building collapsed at a construction site in the Pyongchon(평촌) District in Pyongyang, causing many casualties. A senior North Korean official made an official apology in front of the people, which was a very rare occasion. A speed movement, in principle, should guarantee both quantity and quality. But it actually has limitations in terms of quality control.

The Mallima Movement, which pushes for economic construction ten times faster than the Chollima Movement, has led to various accidents. In a recent example, many people were injured by the collapse of a newly-built residential building in a farming area in Songhwa County in North Korea’s South Hwanghae Province.

Despite the side effects of the speed campaign, North Korea urges its people to join in the effort to tackle heavy international sanctions, strengthen internal unity and pursue self-reliance. But the faster the battle is, the more pain the people feel, since the speed movement is essentially based on their sacrifices.