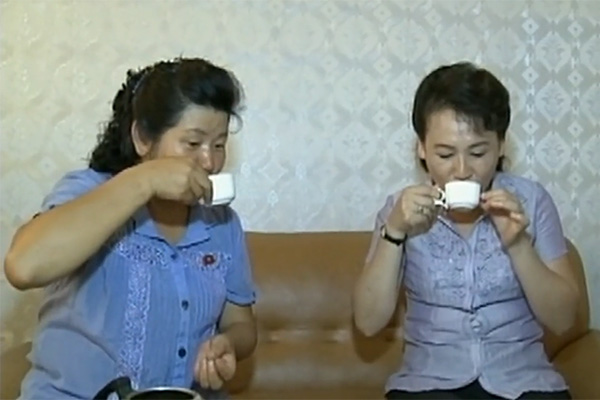 October 1st is celebrated as International Coffee Day. Created by the International Coffee Organization, the day is used to promote coffee worldwide and share various stories about one of the most popular beverages in the world. So, is coffee also enjoyed by people in North Korea? And what does coffee mean to the North Korean people? Here is Professor Chung Eun-chan at the Institute for Unification Education with more.

North Koreans, in general, do not know much about coffee. They usually drink traditional teas, such as omija(오미자) or five flavor berry tea, ginger mugwort tea that is believed to alleviate fevers and recover liver functions, gasiogapi(가시오가피) or Siberian ginseng tea, which is helpful for strengthening one’s immune system, roasted cassia tora seeds tea that is known to boost eyesight and improve vision, and water parsley tea, which is said to help relieve joint pain.

But from the late 1990s and the early 2000s, coffee began to spread among the upper class. These days, a growing number of North Koreans, especially those who live in affluence, are developing a new taste for coffee, with coffee shops cropping up in many places.

In the past, general citizens in North Korea could hardly access coffee as it was considered to be the symbol of capitalism. Also, many North Koreans prefer to drink the healthy, traditional drinks that Professor Chung mentioned.

But nowadays, more and more North Korean residents are hoping to take a sip of coffee. Coffee culture was introduced in the communist country after the collapse of the Eastern Bloc and the creation of the Gaeseong Industrial Complex jointly operated by the two Koreas.

In the early 1990s, following the dissolution of the Soviet Union and the former Soviet bloc in Eastern Europe, North Korean students who had studied there returned home, bringing coffee culture with them. Coffee became popular among the elite, who mostly consumed coffee from Russia or Vietnam. At the time, they drank black coffee with a rather bitter taste, as pre-mixed coffee with sugar and creamer was not available.

In the 2000s, an industrial park was established in the North Korean border city of Gaeseong as one of the cross-border economic projects between South and North Korea. Some 54,700 North Korean laborers worked at the inter-Korean factory park until it was shut down in February of 2016. There, the workers were given South Korean snacks including Choco Pie, which is a chocolate cake snack with marshmallow filling, as well as instant powdered coffee—a combination of coffee, sugar and creamer all in one packet. North Korean workers were fond of this South Korean “coffee mix,” calling it “stick coffee.” It soon became famous through word-of-mouth.

In the 1990s, the culture of enjoying coffee was created in some privileged groups in North Korea, including former leader Kim Jong-il, high-ranking officials, diplomats and those who were dispatched overseas. The former president of the Presidium of the Supreme People’s Assembly Kim Yong-nam is known to enjoy milk, butter, bread and coffee for breakfast.

Coffee was once considered a luxury item that only the elite could afford, but it became more common after the operation of the Gaeseong Industrial Complex. The soluble coffee powder with sugar and creamer, provided by South Korean companies to North Korean workers at the industrial park, proved extremely popular with the North’s citizens. The so-called “coffee mix” was a rare snack for North Koreans, who reserved it for guests. Its popularity never waned even after the closure of the industrial complex. With many North Koreans increasing their purchasing power, South Korean style instant coffee is being traded at private markets or jangmadang.

Although more and more people are becoming aware of coffee in the North, it still isn’t a drink for everyone.

According to foreigners who have visited North Korea, coffee offered at local coffee shops costs about the same as the one at high-end coffee shops in the U.S. Also, South Korean “coffee mix” that is available at the jangmadang is still unaffordable for most North Korean residents.

Despite the high prices, coffee shops have opened in big cities in the North since the early 2010s.

From around 2013, after Kim Jong-un came to power, coffee shops began to appear in large cities including Pyongyang, despite the strong sanctions imposed by the U.N. Security Council and the difficulty in the domestic economy. The purpose is to draw out foreign money held by individuals and channel the hidden cash toward national projects. Through the newly opened coffee shops in big cities, the North also demonstrates that its people can enjoy their free time at cultural and entertainment facilities.

Coffee shops opened at a history museum and hotel in Pyongyang in 2011, at the Haedanghwa Service Complex in 2013 and at Pyongyang’s Sunan International Airport in 2015. Coffee houses have appeared not only in Pyongyang but in other regions as well including Pyongsong, Hamheung, Chongjin and even the border town of Hyesan in Ryanggang Province.

It is said that financially stable North Korean citizens visit coffee bars once or twice a month, despite the hefty price tags. College students and young couples, in particular, love to spend time at coffee shops. The practice of drinking coffee has taken root as a new lifestyle among the younger generation and the wealthy since the image of leader Kim Jong-un and his wife Ri Sol-ju sitting at Sunrise Café was unveiled in 2012.

As the drink has become a trend, many citizens offer coffee to guests at home or at the office, while supermarkets in Pyongyang sell drip coffee as well as instant coffee. North Korea even produces its own coffee mix products at a local factory.

North Korea also makes pre-mixed coffee with sugar and powdered creamer. I’ve tasted some of the North Korean coffee products that entered the South. They are sweeter than their South Korean counterparts. North Korea has its own instant coffee brand, Sambok(삼복), and the address and the phone number of the coffee producer are written on the packets. The yellow packaging and ingredients such as dried coffee, sugar and creamer are similar to those of South Korean instant coffee brands. Each packet weighs 12 grams and coffee makes up 13.3 percent, which is also very similar to South Korean products. Even the size of coffee granules is almost identical to South Korean ones. Without the producer information on the surface, it is difficult to tell the differences between South and North Korean coffee mixes.

It is definitely worth nothing that North Korea started producing food such as coffee mix on its own, although it apparently imitated South Korean products. Still, not every North Korean citizen can afford high-priced coffee.

But the number of coffee shops in North Korea is on the rise and a factory has been set up to manufacture the products, with an increasing number of local people enjoying coffee, which was once rejected as a symbol of Western culture. All these facts indicate that a wind of change is blowing in the reclusive North and will probably spread across the entire nation some day.