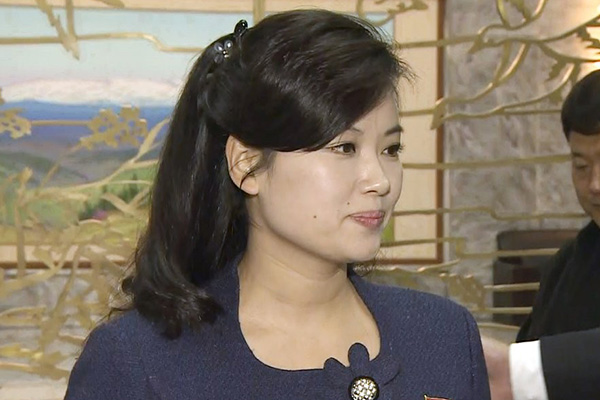 Many South Koreans may remember hanging pictures of their favorite singers, actors or actresses on the wall or laminating their pictures when they were younger. Celebrities might be the object of envy and even serve as a role model for some people. There must be popular singers and movie stars in North Korea, too. Today, we’ll talk about celebrities in North Korea with Kang Mi-jin, a North Korean defector and reporter at the online newspaper, Daily NK.

One of the most famous celebrities in North Korea is leader Kim Jong-un’s wife Ri Sol-ju. The first lady is a former singer who was well-known among North Koreans for a song titled, “Footsteps of Soldiers.”

Another star singer is Hyon Song-wol, who shot to stardom in the 2000s with her hit song, “Excellent Horse-Like Lady.” She was appointed as the leader of the Moranbong Band in 2012 when the popular girl band made its debut. As the envy of all the North Korean artists, Hyon is known to accompany leader Kim Jong-un on his inspection tours.

The Moranbong Band is an all-female music group consisting of seven singers and eleven instrumentalists. Their Western, capitalistic style characterized by unconventional outfits and dynamic movements have created a great sensation. When their performances air on the Korean Central TV, some vendors at the private market, or jangmadang, even close early and go home to watch the shows of the hugely popular band.

One of the most celebrated actresses in North Korea is O Mi-ran from the April 25 Film Studio. Many North Koreans still remember the attractive actress who showed her unique characteristics in a number of movies. Other popular movie stars include Kim Jong-ah(김정아), Hong Yong-hui(홍영희), Choe Chang-su(최창수) and Kim Myong-ja(김명자), who appear in local calendars.

In South Korea, entertainers, in general, become popular and famous after appearing in the local mass media. But that’s not the case with celebrities in North Korea. Would-be entertainers should show talent and be and physically fit, of course. But most of all, they should be armed with socialist and revolutionary ideas. All artistic and cultural performances in North Korea must show the nation’s official Juche or self-reliance ideology and fierce loyalty to the top leader. Celebrities are used to promote the regime, so they are nurtured by the authorities out of necessity.

In the North, movies, soap operas and novels serve as a tool for justifying the legitimacy of the party and the supreme leader, educating people politically and socially, and implementing the leader’s instructions and the party’s policies. The authorities cultivate singers, actors and actresses to serve that purpose.

All artists in North Korea are divided into nine different classes. They are rated every two or three years. In accordance with the evaluation results, their status may rise or fall. It takes a considerable amount of time to be a first-class artist.

Artists with titles such as “meritorious” and “people’s” stand even higher than those of first-class. The honorary titles are only given to those who have worked in the local film scene for a long time and earned recognition.

People’s actors or actresses are treated in the same way as vice ministers at the Cabinet. They can receive medical treatment at some clinics in Pyongyang, where only vice minister-level officials are allowed to go. They are given priority in the purchase of things and the allocation of housing. Meritorious actors or actresses are treated like bureau directors at the Cabinet.

Actors and actresses, in general, are relatively well-off as they are provided with daily necessities every month. Those who won awards at international film festivals are entitled to government benefits, like receiving a car. The authorities provide actors and actresses with apartments designed for artists. On traditional holidays, senior celebrities and those who have made some great contributions receive special gifts in the name of the Kim Jong-un family.

In South Korea, the fan club culture wins broad support among youngsters. Members of K-pop fan clubs mostly consisting of teens and 20-somethings, share news about the new albums of their favorite stars and go to concerts to cheer for their stars enthusiastically. K-pop boy band BTS is known for its official international fan club called ARMY. Is there any fan club culture in North Korea?

There are hardly any fan clubs in North Korea. People in the North may talk about their favorite singers or songs, but they are not passionate enough to create a fan club. It is hard to imagine a signing event for fans, or fans stalking or kidnapping a star. In the North, not every home has a TV, and entertainment programs do not vary, compared to South Korea. Naturally, most children are not interested in entertainers. Teenagers and adults may adore some celebrities, but it’s uncommon. Still, it is said that there is something like fan letters. Since the 1990s, those in the younger generation have frequently sent letters to popular artists to congratulate them for their concerts.

Even people’s artists and meritorious artists may lose the authorities’ trust for their personal mistakes. If that happens, they never have an opportunity to recover their popularity. In contrast, those who stay loyal to the party and make efforts to promote the regime can enjoy benefits even after death.

If celebrities do not make political mistakes, the state continues to give benefits to them and even to their children after they die. Many movie stars are buried in a cemetery for patriotic martyrs located in Sinmi-ri(신미리), Pyongyang. When the cemetery opened in autumn of 1986, there were 190 graves. As of the end of 2014, the number increased to 890. I imagine there are much more now. People who contributed to building socialism and unification movements, as well as high officials of the party and the military, are laid to rest in the cemetery. Those with outstanding achievements in science, education, healthcare, literature, art, publishing and media can also be buried there.

We hope entertainers in North Korea will soon be able to best showcase their abilities and creativity without restraint.