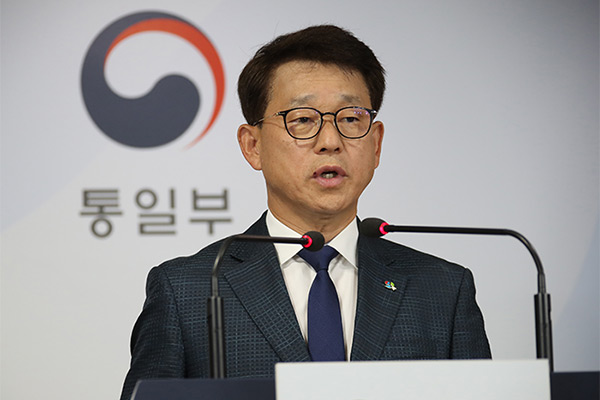 South Korea is seeking to revise a law governing inter-Korean exchanges in order to allow South Korean citizens to make contact with North Koreans for exchange purposes after simply reporting their plans to the government. Under the revision, local governments will be empowered as principal actors in inter-Korean projects and will be allowed to carry out the projects on their own accordingly. At present, any South Korean planning to contact North Korean people must file a report with the Ministry of Unification. The unification minister retains the right to reject reports if their proposed communications are deemed as posing a risk to inter-Korean exchanges, national security, maintenance of order, or public welfare. On May 26, the Ministry of Unification announced that it arranged the revision of the Inter-Korean Exchange and Cooperation Act.

Here is political commentator Choi Young-il to explain this law and the envisioned revision.

In 1989, South Korea pushed for the legislation of the South-North Exchange and Cooperation Act to resolve various cross-border issues, including private-level contact, free visits, trade, and communications affairs. The act was implemented the following year. Since then, there have been growing calls for a legal framework to support inter-Korean exchanges more effectively. The first revision of the act in 30 years will allow exchanges of companies and workers between South and North Korea. It will also permit financial transactions within acceptable levels set by the South Korean government. Moreover, the revision will allow companies in the two Koreas to share business rights over minerals and fisheries resources, and to jointly conduct business. If the revised act gets parliamentary approval, it will facilitate bilateral exchanges in a variety of areas.

The government is actively pursuing revision of the act, in line with President Moon Jae-in’s determination to push for inter-Korean cooperation projects. Simplified mechanisms for inter-Korean contact between local governments, civic groups, and individuals will make it easier for South Korea to execute cross-border projects.

The original law was expected to help promote bilateral contact and exchanges, as well as joint projects. In reality, however, inter-Korean exchanges have only been implemented in a few, specific areas, such as the Gaeseong Industrial Park project. The Seoul government now finds it increasingly necessary to expand joint programs, exchanges of human resources, and financial transactions. Unfortunately, South-North relations remain in a stalemate due to the stalled North Korea-U.S. dialogue. Nevertheless, the two Koreas must resolve their issues one day. With this goal in mind, the South Korean government believes it is necessary to construct a legal and institutional framework.

There are positive hopes as well as worrying concerns regarding the potential revision of the act. Some anticipate that eased regulations on inter-Korean exchanges may cause security problems and foster distrust from the international community that is jointly committed to maintaining sanctions on North Korea. Cooperation from the U.S. is critical for the smooth implementation of North Korea-related programs, so it is essential that South Korea move in sync with any development in nuclear negotiations between North Korea and the U.S. Many are wary of the timing of the revision, in particular.

There is uncertainty as to why the Unification Ministry is rushing to revise the act at this particular point in time. At present, the U.S. insists on North Korea abandoning its nuclear programs altogether, while Pyongyang argues that Washington should first provide a security guarantee and lift economic sanctions on the North. Negotiations have been deadlocked since their February 2019 summit in Hanoi which concluded without reaching an agreement, with strong U.N. sanctions remaining in place on the North. Under these circumstances, the South Korean government is nonetheless pushing to ease regulations on inter-Korean exchanges. While the international community should continue to impose harsh sanctions on North Korea until it abandons its nuclear weapons development program, the Korean government’s recent move is feared to undermine global sanctions and send the wrong signal to North Korea.

In contrast, proponents of the revision maintain that such fears are groundless, claiming that the revision only changes a handful of existing regulations that are considered too strict. These days, frequent contacts take place between South Koreans and North Koreans, including workers, outside the Korean peninsula. As such, reporting these meetings to the authorities and requesting approval might be considered an outdated regulation.

Supporters also believe that the revised act will allow local governments to carry out cooperation programs with North Korea without having to consult intermediary individuals or groups. That means they can reduce costs and minimize any risk of unclear, indirect communication.

The government is certainly well aware of what this revision is all about: international sanctions on North Korea and other concerns. As far as inter-Korean cooperation is concerned, the government remains steadfast in its position that it will do what it can. Of course, South Korea cannot break loose from international sanctions and go its own way. It will not depart from the existing frame of inter-Korean ties drastically. By listening carefully to diverse opinions and concerns, the government is preparing to revise the act in an effort to lay the legal groundwork for promoting cross-border exchanges.

Meanwhile, North Korean propaganda outlets have criticized South Korea’s Unification Ministry for lacking sincerity and shifted responsibility for deadlocked inter-Korean relations onto the South Korean government. Why does North Korea continue to lash out at the South, which proposes bilateral cooperation?

It may sound ironic, but I think North Korea is looking to the South for practical assistance. The North Korean economy is going from bad to worse, and is in desperate need of economic assistance from its southern neighbor. If South Korea refuses to provide help, the North will find it difficult to overcome this economic crisis unless it reaches some sort of dramatic agreement with the U.S. So, I imagine Pyongyang is interested in Seoul’s proposals. But it is too proud to ask for help, especially when it is in difficulty.

The Unification Ministry urges North Korea to respond to its calls, saying that it will calmly prepare for inter-Korean relations in the post-COVID-19 era. It stresses that the revision of the act is not a sudden policy change. It plans to submit the revised bill to the National Assembly within the coming year, after holding public hearings and making a prior announcement of the legislation.

Ruling and opposition parties will engage in in-depth discussion and debate before reaching an agreement and passing the bill. In the process, some may voice objections. In the mid- and long-term, however, the political community will agree on the need for stronger inter-Korean cooperation, which is at the core of the revision. If there are problems, an additional revision could be made at the National Assembly. I expect the parliament will proceed with the revised bill by the end of this year or early next year.

Most analysts agree on the need to revise the 30-year-old act to better reflect the latest developments and trends in inter-Korean relations. Amid controversies and concerns, the planned revision will hopefully serve as a solid legal groundwork to promote peace in this part of the world.