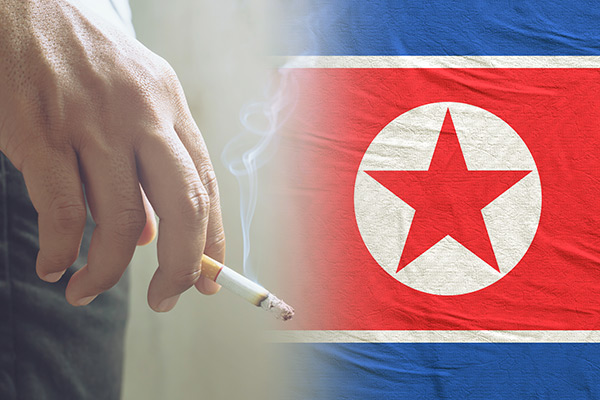 The World Health Organization marked May 31 as World No Tobacco Day. In South Korea, smokers are only allowed to light up in designated smoking rooms found in some public places, including coffee shops. Some buildings are entirely designated as non-smoking zones. How about North Korea? The common perception is that North Koreans enjoy smoking. There’s even a saying that North Korea is the last paradise on earth for smokers. Today, we’ll talk about smoking in North Korea with Kang Mi-jin, a North Korean defector and reporter at the online newspaper, Daily NK.

North Korea is a smokers’ paradise and I estimate North Koreans’ love for smoking is among the greatest in the world. At one point, the smoking rate for adult males in North Korea was 54.7 percent, higher than the world’s average. According to a report released by the World Health Organization (or WHO) in June 2017, 52.4 percent of North Korean men were identified as smokers at the end of 2012. Two years later, the figure had fallen to 43.9 percent. But some estimate that the actual rate is far higher. In the South Korean Ministry of Unification’s North Korea report from May 2004, the smoking rate for North Korean men over the age of 20 was as high as 80 percent. Smoking is still permitted in hotels, restaurants, coffee shops, and even on public transportation in the North. Local TV soap operas, movies, and newspaper photos do not blur smoking scenes but reveal them just the way they are.

North Korean leader Kim Jong-un himself is known for his love for smoking. While traveling to Hanoi, Vietnam, by train for his second summit with U.S. President Donald Trump in February last year, Kim was spotted smoking at Nanning Station in China, with his younger sister Kim Yo-jong standing next to him, holding his ashtray. The North Korean leader’s chain-smoking can be frequently seen in footage from Korean Central TV as well as photographs published by the official Rodong Sinmun newspaper. He is often seen smoking during his visits to military units, factories and enterprises, and even facilities where smoking is prohibited, like hospitals and daycare centers. His carefree cigarette puffing wherever he wants has drawn international criticism.

The young North Korean leader often lights up cigarettes in front of senior officials in their 60s and 70s, in an apparent move to demonstrate his power. Kim Jong-un studied in Switzerland when he was younger, and probably experienced various types of foreign tobacco products there. It is said that the heavy smoker picked up the habit when he was a teenager. North Korean men tend to associate smoking with symbols of authority and power, and it is common for older men to habitually puff away on cigarettes in front of younger people. Kim is frequently seen with a lit cigarette in his hand on TV and in newspapers. I think he wants to reinforce his image as a strong leader. One of his favorite tobaccos is the “727” brand, although some claim that he began to favor another domestic brand called “Construction” in 2018.

North Korea produces hundreds of tobacco brands for its domestic market. This is staggering, considering that North Korea’s gross national income is 26 times smaller than that of South Korea, which produces some 50 types of cigarettes. Many North Korean cigarette brand names reinforce characteristics of the communist regime.

One North Korean cigarette brand is named “Red Star,” which symbolizes the nation’s juche or self-reliance revolution. Another, called “Satellite,” alludes to North Korea’s development of long-range missiles. Other names such as “Mt. Baekdu” and “Chonji” represent the foundation for the establishment of the North Korean regime. Chonji is a crater lake on top of Mt. Baekdu.

Filtered and unfiltered cigarettes as well as leaf tobacco are available in North Korea. Top-quality cigarettes provided to high officials are marked with a blue color. With such considerable variety of cigarettes, different types of tobacco products are marketed, depending on the time of year. Since the 2010s, imported cigarette brands such as Dunhill and Mild Seven have reportedly been available at department stores and foreign currency shops in Pyongyang.

North Korean cigarettes are inexpensive and easy to find, so local citizens have no problem in getting them.

Some people think that North Korea operates a tobacco monopoly system or only sells cigarettes at designated places. That’s not true. There are dozens of tobacco factories in the North. The cigarettes they produce are quickly distributed to markets in various parts of the country. At the private markets known as jangmadang, tobacco vendors are widespread. It is common to see wholesalers carrying large amounts of tobacco products on trains or using the nation’s unique logistics vehicles called service-cha. This demonstrates that tobacco is among the most sought-after items at the jangmadang.

In line with global anti-smoking trends, North Korea has encouraged its nationals to kick the habit as of late. On May 29, North Korea’s English-language newspaper, the Pyongyang Times, introduced a national anti-smoking campaign, saying that more non-smoking sections are being created in public places and buildings.

North Korea reportedly began to put stronger warning messages on cigarette packs in March 2016. Previously, there was a warning text like “Smoking is bad for your health.” This was later replaced by more intimidating phrases, such as “Smoking increases the risk of a stroke,” with more detailed warnings added. In 2016, the state-run Korean Central TV aired a 40-minute program titled “A Life-threatening Item of Personal Preference.” In the program, a commentator explained the dangers of tobacco, while female guests talked about the harm of tobacco to discourage male smokers. The Rodong Sinmun newspaper has also carried an article about the adverse effects of smoking on the body. In this way, North Korean state media outlets are actively conducting an anti-smoking campaign. But it is ironic that North Korea has increased its number of tobacco factories for more production, while encouraging people to quit smoking.

North Korea actively supports the campaign against smoking, but as the country’s leader is habitually seen smoking in public, it is uncertain how effective the nation’s ongoing anti-smoking movement will be.