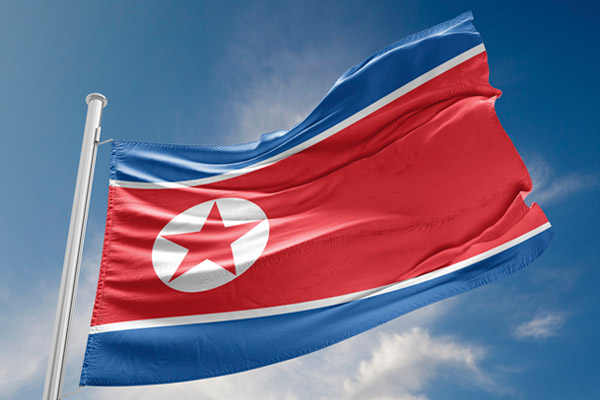 A national flag represents a given nation. In ancient societies, groups used particular symbols to represent themselves. Flags featuring those symbols later became national flags. Today, countries use certain colors and shapes to express their traditions and ideals through their national flags.

So, what does North Korea’s national flag imply? South Koreans call the North Korean flag “Ingonggi,” meaning the flag of the Democratic People’s Republic of Korea. North Korean people, when referring to their national flag, use words translated as the “blue- and red-colored flag of the Republic” or the “red five-pointed star flag.” Here is Professor Chung Eun-chan at the Institute for Unification Education to explain more in detail.

From Korea’s liberation from Japanese colonial rule in 1945 to July 24, 1948, North Korea used a flag known as Taegeukgi as its national flag. This flag later became associated only with South Korea. The South Korean government was officially established on August 15, 1948, while North Korea set up its own government on September 9 in the same year. In the process, a new flag for North Korea was made by the Soviet Union.

According to Article 170 of Chapter 7 of North Korea’s Socialist Constitution, the national flag consists of a central red panel, bordered both above and below by a narrow white stripe and a broad blue stripe, and the panel bears a five-pointed red star within a white circle near the hoist. It is also stated that the ratio of the flag width to length is 1:2. The red star is a universal symbol of communism and socialism. The red stripe represents revolutionary traditions, while the blue stripe symbolizes sovereignty, peace and friendship.

After Korea’s liberation from Japanese colonial occupation, Taegeukgi remained in official use in North Korea before the formal adoption of its current national flag on September 8, 1948.

As Professor Chung explained, the flag was designed by the Soviet Union. The fact was revealed through the testimony of Pak Il, who worked as an interpreter for the new flag production. Professor Pak is known as a scholar who served as the vice president of Kim Il-sung University from 1946 to early 1948.

North Korea discussed the creation of a new flag with the Soviet Union. Pak, a Soviet Korean, was an interpreter at the time. Then-political officer and Major General Lebedev asked Kim Tu-bong, President of Kim Il-sung University, to explain the meaning of the existing flag of Taegeukgi and express his opinion about a new flag. Kim said it would be good to continue to use Taegeukgi as a state flag as it reflected Korean traditions. Lebedev was opposed to the idea, calling it nonsense. He insisted that a new communist state needed a new flag. Afterwards, the Soviet Union designed a new flag for North Korea.

Even after North Korea received a new flag design from the Soviet Union, it used Taegeukgi for some time. When prominent independent activist and politician Kim Koo visited Pyongyang to meet Kim Il-sung in April 1948, he delivered a speech under Taegeukgi, not the North Korean flag.

However, the nation needed a new symbol in line with the Workers’ Party platform aimed at establishing socialism. At the fifth session of the People’s Assembly for northern Korea on July 10, 1948, Taegeukgi was taken down and the new flag was hoisted on a trial basis. With the establishment of the North Korean government on September 9 that year, the new flag was officially in use.

Following the test hoisting of the new flag on July 10, 1948, North Korea announced on July 24 that it would abolish Taegeukgi and raise the new national flag. With the establishment of the government of the Democratic People’s Republic of Korea and the adoption of the Constitution in September 1948, the new flag officially became the state flag. At the time, some officials, including Kim Tu-bong, supported the traditional Taegeukgi. Kim published a book entitled, “On the Establishing of the New National Flag and the Abolition of Taegeukgi.” He had to stress that it was inappropriate to use the old flag, but the book actually showed the values of the flag.

Some say that while explaining the flag in detail, he unconsciously expressed his opinion about the great traditional elements in it.

The North Korean national flag had long been considered a taboo in South Korea, reminding South Korean people of the painful reality of their divided country. Naturally, there has been controversy over the use of it at international sports events held in the South.

The North Korean flag was first hoisted in the South during the 2002 Busan Asian Games, amid the inter-Korean reconciliatory mood that had been created since the first inter-Korean summit in June 2000. But the process was not smooth.

During the 2002 Busan Asian Games, the South Korean government allowed the North Korean athletes and cheering squad to use their national flag within stadiums. The North Korean flag was only hung at the organizing committee, press center and the athletes’ village. North Korea requested its flag to be put up on buses for its delegation but was rejected. The restrictions had the purpose of preventing ideological splits or conflict within South Korea.

Before the Summer Universiade in Daegu in late August 2003, a group of South Korean conservatives burned North Korean flags and the portrait of then-North Korean leader Kim Jong-il. There was a clash between the government and the conservative activists over the flag issue, as the former tried to block the latter, while the activists pushed ahead with their plan nevertheless. Pyongyang criticized South Korea for insulting its regime and implied that it would not send athletes to the Universiade. Then-South Korean President Roh Moo-hyun and the Unification Ministry expressed regret over the damage of the North Korean flags.

Just about a dozen years ago, South Koreans who showed the North Korean flag in their publications could be indicted for violating the National Security Act. In some old documents at local libraries, certain pages are blacked-out or cut out completely. They are mostly foreign materials carrying the photos of the North Korean flag.

South and North Korea use their own national flags. When they march together during the opening ceremonies at the Olympic Games or field joint inter-Korean sports teams, they use a flag that bears an image of a blue Korean Peninsula against a white background.

What if the two Koreas achieve unification? They might adopt Taegeukgi, which was used on the entire Korean Peninsula before Korea’s liberation from Japanese colonial rule. Alternatively, they could even design a new flag. We can’t help but wonder what the national flag will be like in a unified Korea.