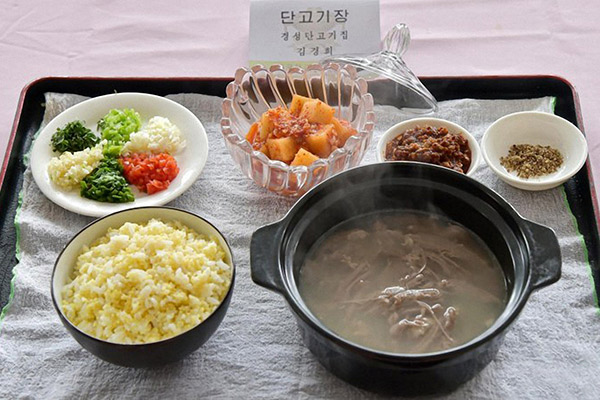 With the intense heatwave gripping South Korea, many local citizens show interest in healthy food, which is believed to help them regain lost stamina from the sizzling heat. In Korea, there are three hot days: chobok is the first, jungbok the second and malbok the last. During the hottest period of the year that lasts about a month, many Koreans enjoy high-protein food such as samgyetang or ginseng chicken soup. We can’t help but wonder what kinds of nutritious dishes are consumed by North Korean people during the hot summer season.

In North Korea, there is an old saying that even a single slice of dangogi can be great medicine during hot summer months. This shows North Korean people’s love for dangogi, which refers to dog meat. The propaganda outlet, DPRK Today, praised dangogi as Korea’s traditional food that is as valuable as a national treasure, citing old historical texts from the Joseon Kingdom. It said that Korean ancestors would eat steamed rice with millet or white rice in hot dangogi soup to break a sweat during the traditionally three hottest days of summer as one of the best ways to rejuvenate the body. The media outlet added that people in North Korea are often seen delightfully blowing on steaming dangogi soup at local restaurants during midsummer every year. Being a North Korean defector myself, I remember many families in the North ate dangogi soup during the hottest period of summer.

The consumption of dog meat has generated a lot of controversy in South Korea and abroad. In recent years, many South Koreans have protested and opposed to the habit, especially when hot summer days approached. In June 2018, a revision bill to the Animal Protection Act banning dot meat consumption was proposed to the National Assembly. Amid growing calls worldwide for prohibiting the use of brutal methods to slaughter dogs, is there any change in North Koreans’ perception about dog meat?

If North Koreans hear the news about a South Korean campaign to ban the consumption of dog meat by law, they will say it is very bizarre and will find that hard to believe. In the North, dogs are not a companion animal and are specified as livestock. They take it for granted that dogs, just like pigs, are a source of food and their meat can be put on the table when necessary. They believe this is the dogs’ fate. There are even dog meat restaurants run by the government.

The popularity of dangogi among North Korean people has something to do with their top leaders’ love for it. A famous dangogi restaurant in Pyongyang displays handwritten letters of encouragement sent from former leader Kim Jong-il and current leader Kim Jong-un.

Former leaders Kim Il-sung and Kim Jong-il are known for their great fondness for dog meat. Kim Il-sung himself instructed the word “dangogi” in 1985. It is said that dog meat chefs in Pyongyang receive regular training. It seems North Korean leaders all have a positive attitude toward dangogi soup. Kim Jong-il, for example, once said that dangogi dishes are traditional Korean food loved by people. He visited dangogi restaurants at every opportunity. North Korea even has a policy for dog meat dishes and shows great consideration for them.

While red bean porridge is usually eaten on the winter solstice in South Korea, North Korea introduces it as invigorating food in summer, noting that the cold energy in red beans helps cool off the summer heat. Also, chicken in a cold broth with vinegar and mustard, known as chogyetang, helps increase one’s appetite in summer. It is considered one of the summer health foods in South Korea as well.

People may believe that nourishing food in summer is mostly about meat, but North Koreans like to eat red bean porridge in summer as well. A local newspaper recommended people to bring the porridge to a rolling boil and eat it, dripping with sweat, for the desired effect. It also said that boiling food on hot summer days will strengthen their body and help them withstand the heat, as indicated in the old saying, “Fight the heat with heat.” North Koreans believe that red beans prevent diseases, ward off evil spirits and help them resist the heat.

Chogyetang was originally consumed as a winter delicacy in Hamgyeong and Pyongan provinces. Its ingredients include highly nutritious chicken with low fat, protein-rich beef, sea cucumbers - which are called the ginseng of the sea -and mung bean jelly that helps remove toxins brought on by the heat and recover one’s health.

These health supplementary foods are not cheap, though. Many North Korean residents list steamed rabbit stuffed with healthy ingredients as nutritious food, as rabbit meat is relatively inexpensive and easy to get. This rabbit meat dish had become popular since the 1970s when North Korea introduced the so-called “Kid Plan.” Under the plan, the nation ordered children to raise rabbits, claiming that their rabbit breeding will contribute to the prosperity of their socialist homeland. North Korean residents kept rabbits at home in order to offer a certain amount of rabbit skin to the state every year. It does not cost much to keep rabbits, which grow well at ordinary homes, compared to chickens that only grow in rural areas. It comes as little surprise that rabbit meat has become popular health food for many local residents.

Rabbit meat is tender but chewy and tastes like pine mushroom. People clean the inside of the cavity and stuff it with various ingredients, including glutinous rice and milk vetch roots. Some people put medicinal herbs or red beans. Then, they boil it for two to three hours. The food smells sweet and tastes wonderful. It is one of the finest nutritious dishes.

Amid chronic food shortages, North Korea has promoted rabbit farming as one of the ways to provide meat. Rabbits are well known for their ability to reproduce, with female rabbits potentially giving birth once a month. Also, rabbits live on grass, not grains and they provide meat for humans. For that reason, North Korea has constantly stressed the need for rabbit breeding since the late 1970s, under the slogan of “Exchange grass for meat.” It is easy to raise the animal, and rabbit meat is often eaten on hot summer days.

Health food refers to invigorating food that strengthens the body and replenishes one’s energy. It doesn’t necessarily have to use expensive meat. We hope North Korean people will enjoy some nutritious food, whatever it is, to beat the heat and stay healthy.