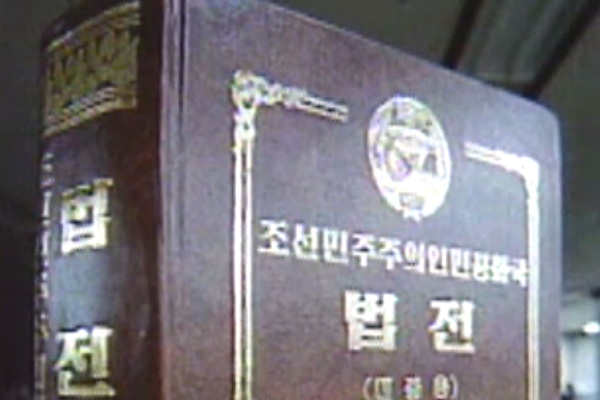 Law is a set of rules or social norms enforced by the state with the purpose of realizing justice and maintaining social order. Laws may vary slightly from country to country, but in general, they reflect the reality and values of society. In this context, we could better understand North Korean society by examining its law. Today, and in the next installment of Inside North Korea, we’ll learn about North Korean law.

Perhaps, instructions of the top leader and the party are the law in North Korea. We can’t help but wonder if North Korea also has the Constitution, criminal law and civil law, like the ones in South Korea. The socialist North does have laws and revises them, when necessary. Here is lawyer Oh Hyun-jong to tell us more.

North Korea has the “Laws of the Democratic People’s Republic of Korea” printed by Law Publishing Company. The code of laws even has its supplement, indicating that new laws were made or existing ones were changed. North Korea apparently does have various laws. This is also evidenced in the fact that there are judges, prosecutors and lawyers in the North and that a number of professors study law at Kim Il-sung University.

Many might be wondering if North Korean laws are recognized in South Korea. It depends on whether or not North Korea is recognized as an official state. In South Korea, the Supreme Court and the Constitutional Court regard North Korea “as an anti-government organization” and define inter-Korean ties as “a special relationship that has been formed temporarily in the course of pursuing unification.” That is to say, South Korea does not recognize North Korean laws. China and Russia, in contrast, acknowledge North Korea as an independent country and therefore recognize its laws.

While South Korea’s Constitution starts from the standpoint of individuals or the members of the state community, the community itself comprises the beginning of North Korea’s. The South Korean Criminal Law consists of 372 articles, but North Korea has 161. In the North, Criminal Law mostly deals with crimes against defense management, the socialist economy and culture, and general administrative management. It shows that the law is aimed at protecting the state overall, not individuals. Similarly, North Korea’s Civil Law only has 271 articles, compared to South Korea’s 1,118. This is a staggering difference. A civil law, in general, stipulates rules about individual rights or private properties. In North Korea, this subject is far less significant than rules about groups or the community.

The concept of the rule of law in North Korea is starkly different from South Korea’s. In the South, laws have the purpose of protecting the basic rights of the people and controlling state power, based on constitutional values.

In fact, it is difficult for North Korea to execute the rule of law. According to the theory of law in Marxism-Leninism, laws are doomed to extinction in the transition to a communist society. Therefore, North Korea did not really pay attention to the role of laws. But North Korean society has stressed the purpose and role of laws as of late.

In the past, law enforcement in North Korea was simply a means of executing the leader’s ideology or party policies. North Korean laws were regarded as something that is subordinate to politics, so they had limitations. But to secure the legitimacy of the power transfer from former leader Kim Jong-il to current leader Kim Jong-un, North Korea needed some other institutional framework to regulate the people. Also, in the process of implementing the economic policy of openness, it was inevitable to carry out economic and cultural exchanges with the outside world. These changes have led to stricter laws governing people’s behaviors and activities. It is said that various laws have been enacted, amended and revised in the North. The previous Workers’ Party regulations have now been legislated in a move to regulate people under the rule of law.

The rule of law still remains a formality in North Korea. But obviously, laws are in operation as a system to run North Korean society. This is definitely a good sign for South Korea, which is North Korea’s partner who seeks cross-border cooperation and exchanges as well as unification. Lawyer Oh now explains how the two Koreas should arrange the legal system in preparation for reunification.

First, scholars in South Korea need to learn about current laws in the North to better understand North Korean society. Some people may think that unification is about expanding South Korea’s political system into North Korea’s. But unification is more than just the expansion of a political system. In a unified Korea, people on the entire Korean Peninsula should be allowed to seek freedom, equality and happiness, with their dignity and value respected. That’s the purpose of unification. It is necessary to unify and integrate in a way to serve that purpose.

South Korean laws are significantly different from North Korea’s. Therefore, even if the two Koreas are unified, it may take a long time to achieve unification in the legal area. Differences between West and East Germany were smaller, compared to those between South and North Korea. But even after Germany was reunified by the West absorbing the East, it is still in the process of unifying laws. It seems necessary to understand laws in both Koreas exactly and prepare for an ideal legal system in a unified era.

Next time, we’ll learn more about North Korean law, with a focus on some examples.