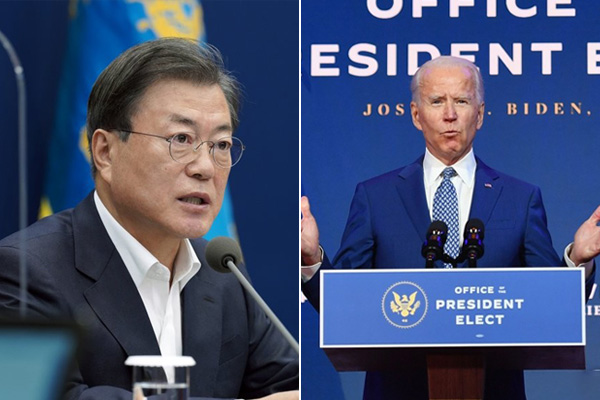 President-elect Joe Biden is expected to abandon Trump’s “America-first” policy and strengthen alliances with other countries. Analysts also predict that the Biden government will reinforce the South Korea-U.S. alliance, which has somewhat loosened under the Trump government. Here’s political commentator Choi Young-il with more.

The most important message of Biden is, “America is back.” Incumbent President Donald Trump has dealt with politics in a pretty unconventional and unexpected way. While Trump has shown a desire for leading North Korea-U.S. relations, he has shaken the traditional relationship between South Korea and the U.S.  He has threatened to withdraw U.S. forces from South Korea unless Seoul pays more for the upkeep of American troops stationed in South Korea. Biden, on the other hand, as a career politician, will seek to restore the South Korea-U.S. relations and strengthen the bilateral alliance further. He is expected to focus more on the restoration of traditional values than on defense costs.

South Korean President Moon Jae-in held a telephone conversation with U.S. president-elect Joe Biden on November 12. The two men talked about various issues, including the North Korean nuclear crisis, COVID-19 and climate change. Above all, they shared their views on the need to strengthen the South Korea-U.S. alliance and cooperate for regional peace. In particular, Biden called the bilateral alliance a “linchpin” for security in the Indo-Pacific region. Obviously, Biden was stressing the role of South Korea in regional diplomacy.

Washington’s Indo-Pacific strategy is seen as a move to counter the growing influence of China by encircling it with an alliance with South Korea, Japan, India and Australia. It is a throwback to the Barack Obama government’s Asia-Pacific policy.

Biden’s remarks about the “Indo-Pacific region” during his phone conversation with the South Korean president indicate that the U.S. wants to group its Asian allies together against China. In other words, Biden is asking South Korea to join a broad alliance against China. The South Korean government is growing increasingly anxious as to how to carry out its China policy.

How to strike a balance between the U.S. and China will be the biggest task in Moon’s remaining days in office. If Seoul leans toward Washington, the U.S. will deploy South Korea forward in forming a united front against China. But if that happens, China’s retaliation against South Korea would be anticipated. South Korea is in a precarious situation, in which it should not disappoint both the U.S. and China. It is under a heavy diplomatic burden of maintaining its traditional relations with the U.S. and seeking China’s understanding.

The presidential office in Seoul has refuted the argument that the word “linchpin” underlines Washington’s strategy to pressure China. According to presidential spokesman Kang Min-seok, the “Indo-Pacific region” mentioned by Biden simply meant a geographical location and the U.S. has used the expression “linchpin” for a long time to indicate the importance of the South Korea-U.S. alliance. He said that it is not appropriate to attach different meaning to this term.

Meanwhile, Biden made a trip to a Korean War veterans’ memorial in Philadelphia on November 11, when the U.S. observed its national Veterans Day. Attention was drawn to why he visited this memorial, in particular, on the occasion of U.S. Veterans Day.

Joe Biden and his wife Jill Biden stayed there for 15 minutes to pay their respects to fallen American soldiers during the Korean War.

This is a message toward South Korea and American citizens, indicating the importance of the South Korea-U.S. alliance. There are multiple veterans’ memorials in the U.S. that carry significance, including those of the Vietnam War and the Iraq War. Biden chose to visit the Korean War veterans’ memorial as his first official event since his election victory, reflecting his commitment to building a united front of allies against China, on an axis of the South Korea-U.S. alliance.

The South Korean government needs to figure out Biden’s foreign policy direction. In this respect, Foreign Minister Kang Kyung-wha’s visit to U.S. on November 8 is considered timely and appropriate. In the U.S., she met with people considered close to Biden, such as Senators Chris Murphy and Chris Coons, and stressed the need for the new U.S. government to prioritize the North Korean nuclear issue.

Also, South Korean ruling party lawmakers, including chairman of the parliamentary foreign affairs committee Song Young-gil, left for the U.S. on November 15 to meet some major figures there. Brad Sherman, who is considered a possible candidate for chairman of the House Foreign Affairs Committee, told the South Korean lawmakers that the Biden government might take measures to accelerate North Korea’s denuclearization next spring, when the new administration becomes stable. The Democratic congressman stressed that it is important to prevent a provocation by North Korea in the leadership transition period in the U.S.

In a desired scenario, North Korea will carefully watch how the U.S. will act, play some mind games with Biden and engage in dialogue eventually. In an unwanted scenario, North Korea may preemptively launch a military provocation. In fact, the regime has typically resorted to this. The U.S. diplomatic community believes that the Biden administration will set its North Korea policy direction after watching Pyongyang’s move in the power transition period.

That’s why Sherman delivered a strong message that North Korea should refrain from any provocation in this sensitive period.

We’ll have to wait and see what message North Korean leader Kim Jong-un will convey to the U.S. in his New Year’s speech in early January next year. Also, next January, North Korea will convene the eighth party congress to announce important plans and strategies, including its U.S. policy.

As far as the Korean Peninsula issues are concerned, the basic policy line of the new Biden government has been revealed. But its foreign policy may change at any time, and things could be unfold in an unexpected way under the incoming administration in the U.S. The South Korean government needs to come up with various possible scenarios and prepare for well-thought-out countermeasures.