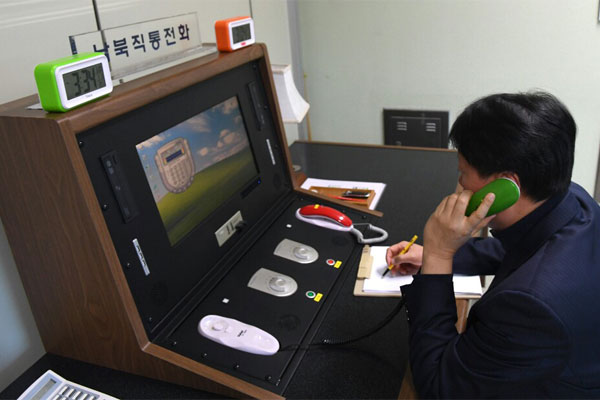 Here is Cho Han-bum, senior researcher at the Korea Institute for National Unification, to explain.

All the inter-Korean communication lines had been cut off since June 9 last year before they reopened on July 27 this year. The restoration on the occasion of the anniversary of the Korean War armistice agreement shows that North Korea is also committed to improving ties with the South.

In fact, inter-Korean relations as well as North Korea-U.S. relations have been deadlocked for two and a half years since the breakdown of the second North Korea-U.S. summit in Hanoi in February 2019. Of course, the recent restoration of the inter-Korean communication lines after a 13-month suspension is significant in terms of South-North relations. But it could also provide important momentum to turn the situation around in overall diplomacy.

According to the presidential office of Cheong Wa Dae in Seoul, South Korean President Moon Jae-in and North Korean leader Kim Jong-un have exchanged letters several times since April, on the occasion of the third anniversary of their first summit in 2018. The office explained that in the process, the two sides agreed to move bilateral relations forward again, starting by restoring the communication lines.

North Korea also announced that it took necessary measures to reactivate all inter-Korean communication liaison lines as of 10 a.m. on July 27, in accordance with the agreement between the leaders of the two sides.

During his New Year’s message early this year, North Korean leader Kim Jong-un mentioned the warm spring days in inter-Korean relations three years ago. South Korean President Moon Jae-in said in his own New Year’s message that he would make last-ditch efforts to resume the Korean Peninsula peace process. The Biden administration in the U.S. completed the review of its North Korea policy, and the South Korea-U.S. summit took place in May. During the summit, Biden said that he supports South Korea’s efforts toward cooperation and engagement with North Korea. It turned out that the letter exchange between Moon and Kim came before the South Korea-U.S. summit. Later, in a plenary meeting of the party in mid-June, the North Korean leader stressed the need to prepare for both dialogue and confrontation with the U.S. In a conciliatory message, he also said that his country would focus on the stable management of the situation on the Korean Peninsula.

After those developments, the reopening of the inter-Korean communication lines is not seen as a mere one-time event. It, in fact, indicates that the two Koreas and the U.S. are moving in the same direction to reactivate the peace process on the Korean Peninsula.

In a parliamentary briefing on Tuesday, the National Intelligence Service in South Korea said that Seoul and Pyongyang had been talking over the phone twice a day through their restored communication lines. Regarding the background of the reopening of the cross-border communication lines, the spy agency said that the leaders of the two Koreas confirmed their commitment to recovering trust and improving inter-Korean ties through their letter exchanges since April.

North Korea is unhappy about the collapse of the Hanoi summit, although it proposed dismantling the Yongbyon nuclear complex, which it claims is its key nuclear facility. Pyongyang failed to get sanctions relief from Washington after all. The North is discontent with South Korea as well, as bilateral agreements reached at inter-Korean summits in 2018 have not been implemented at all.

North Korea is in a really tough spot. It suffers from a severe food shortage and its economy contracted 4.5 percent last year, the worst since the Arduous March period in the late 1990s. The North Korean leader urged his country to prepare for an even tougher “Arduous March” during a conference of cell secretaries of the party in April, reflecting how serious the situation is. It seems the North is faced with the worst ever difficulty under Kim Jong-un’s ten-year rule and probably the worst situation for the North Korean regime. It badly needs food and medicine aid in the short term and a sanction exemption over the mid and long term. Otherwise, the nation cannot overcome its economic difficulties. Against the backdrop, North Korea has sent a dialogue signal.

Following the restoration of inter-Korean communication lines, the strained cross-border ties are expected to enter a new phase. Analysts have mixed views about whether the latest development will lead to an improvement in inter-Korean relations and North Korea-U.S. dialogue.

In the best-case scenario, an online inter-Korean summit might be held in August or September, followed by the resumption of working-level nuclear talks between North Korea and the U.S. and some sort of their small deal. However, Pyongyang and Washington have not narrowed their differing views since their failed summit in Hanoi. In a pessimistic scenario, their talks continue to remain deadlocked without any substantial result until the end of the Moon government’s term, with North Korea launching low-intensity provocations.

Meanwhile, North Korean leader Kim Jong-un’s sister Kim Yo-jong announced a statement on August 1 through the Korean Central News Agency. She said that the South Korea-U.S. combined military exercises scheduled for this month would be an “undesirable prelude” undermining efforts by the leaders of the two Koreas who hope to take the first step to restore trust and darkening the prospects of inter-Korean ties. Her warning came only five days after the South and the North restored their communication lines.

It is North Korea that is in desperate need of dialogue. The country’s top leader has already expressed his commitment to dialogue, which cannot be overturned by his sister. The planned South Korea-U.S. combined military exercises do not involve a large-scale mobilization of troops. It is uncertain if the allies will actually conduct the exercises in the pandemic situation. Even so, Kim Yo-jong issued such a statement in an apparent bid to underline that North Korea is leading the situation and to urge South Korea and the U.S. to show sincerity. Whatever the reasons, the warning is another source of trouble for South Korea and the U.S.

The South Korea-U.S. military exercises will likely emerge as another factor to influence future inter-Korean ties.

Following the reopening of cross-border communication lines, South Korea needs to devise a clever strategy to resume inter-Korean talks and pave the way for North Korea-U.S. dialogue as well as the Korean Peninsula peace process.