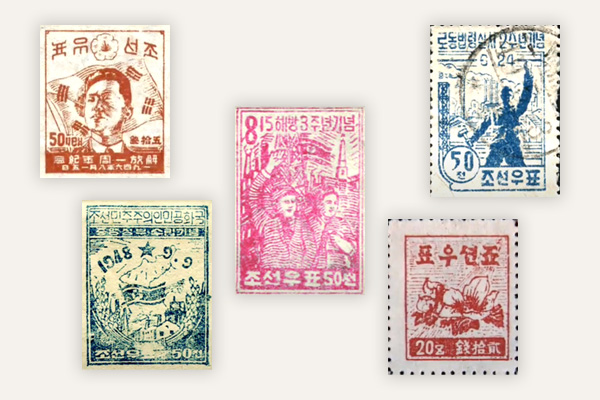 Some of young people may have never used stamps before. During the time when telecommunications facilities were not developed, people sent letters with stamps to their friends or relatives to say hello. These days, postage stamps are rarely used, as people can deliver their messages quickly through social media. But in North Korea, it is said that stamps are still widely used. Today, we’ll learn about stamps in North Korea from Professor Jeong Eun Chan at the National Institute for Unification Education.

In North Korea, special stamps like commemorative stamps are more expensive than regular ones. I remember I was happy to send letters with special stamps to my teachers, who were also pleased to receive them. In South Korea, people mostly use emails or SNS, and it is not very common to put handwritten letters in envelopes and place stamps on them. In North Korea, mobile phone use is restricted and far more local citizens still use stamps than their South Korean counterparts.

The Encyclopedia of North Korea defines a stamp as a paper certificate affixed to a piece of mail as a sign of postage. On national holidays and important anniversaries, North Korea issues commemorative stamps that contain political messages or worship the top leader. That is, the country uses stamps as a means of promoting its state policies. While many countries promote themselves through stamps, North Korean stamps focus extremely on regime propaganda, as seen in commemorative stamps for the eighth congress of the ruling Workers’ Party this year.

During the eighth party congress early this year, the tenth year of Kim Jong-un’ rule, North Korea announced a five-year economic development plan, while the leader was elected general secretary of the party. Important party decisions like these were reflected in the commemorative stamps. The stamps show that North Korea stresses internal unity and the principle of “serving the people is serving the heaven” in politics, “self-reliance” in the economy and the independent unification of Korea when it comes to inter-Korean relations. The major purpose of North Korean stamps is to promote the regime and the leader’s achievements.

Korea’s first stamps were issued in 1884 when the Korean Postal Bureau was established. The stamps were of two denominations: 5 and 10 “mun.” “Mun” was the unit of currency at the time.

The first stamps of North Korea were issued in 1946. Simply featuring the design of Rose of Sharon only, the stamps were released in two different colors—red and green. The second stamps had the design of Samson Rock at Mt. Geumgang. The third ones were issued on August 15, 1946, to commemorate the first anniversary of Korea’s liberation from Japanese colonial rule. Then-leader Kim Il-sung comprised the theme of the stamp design.

About 7,000 kinds of stamps have since been issued in the North, with most of them dedicated to praising and promoting the socialist regime.

North Korea has diversified stamps lately, producing stamps generating a three-dimensional effect, gold foil stamps and even DVD-ROM stamps. The country is said to be using stamps as a tourist item to earn foreign currency.

The Foreign Languages Publishing House under the Propaganda and Agitation Department of the Workers’ Party issues stamps, and the Korea Stamp Corporation is North Korea’s exclusive stamp seller. Stamps are sold domestically, and North Korea would sell books related to its stamps in Chinese regions bordering the North.

In North Korea, stamps are used to deliver mails, praise the regime, promote large events, both domestic and foreign, and even bring in more foreign currency. North Korea issued stamps to commemorate the first anniversary of the 2018 North Korea-U.S. summit in Singapore. The commemorative stamps are considered to be the greatest and largest ever, in terms of formality and the amount of stamps issued.

North Korea highly publicized the first summit between its leader Kim Jong-un and former U.S. President Donald Trump in Singapore. To mark the first anniversary of the historic summit, North Korea released a set of three stamps that portray the handshake of Kim and Trump, their signing of a joint statement after the meeting and the full text of the statement. Clearly, the stamps contributed to promoting the regime internationally. The two stamps depicting the two leaders were priced at 200 North Korean won each, and the stamp featuring the design of the joint statement was 50 won. An average North Korean worker earns a monthly salary of 3,000 won. The stamp containing the image of the top leader is much more expensive than the one that does not include it. North Korea also imprinted the phrase “The Meeting of the Century” on the first day cover, which is an envelope affixed with the newly issued stamp and bears the postmark of the first day of issue. Many were impressed to see the embossed seal of the phrase. North Korea released relevant stamp books and sold hundreds of thousands of the commemorative stamps to earn foreign currency.

Stamps reflect the history, politics and culture of a country. Interestingly, some stamps in South and North Korea show the same theme, such as the Dokdo islets and an inter-Korean summit, although the two sides did not agree on that before.

South and North Korea share many things in common when it comes to stamp designs. For instance, both Koreas have similar stamps featuring the portrait and handwriting of anti-Japanese Korean independence fighter Ahn Jung-geun and other historical figures such as Admiral Yi Sun-shin and his turtle ship. Images of cultural relics such as mural paintings of ancient tombs located in North Korea and the Cheomseongdae(첨성대) Observatory in the South also appear in stamps in the two Koreas.

Right after Korea’s liberation from Japanese colonial occupation, North Korean stamps featured Rose of Sharon, which, in fact, is the national flower of South Korea. This shows that Rose of Sharon was the national flower of Korea for some period after liberation, before North Korea designated a flower called mokran, a kind of magnolia, as its national flower under the instruction of former leader Kim Il-sung. The early-stage North Korean stamps with the design of Rose of Sharon show that the South and the North are the same Korean race. The two Koreas have been divided for over 70 years, but it’s a relief to know that they have similar stamps highlighting the same historical figures, thanks to their shared history.

Even small stamps remind us that people both in the South and the North are the same Koreans. We hope letters with the same postage stamps will be delivered to anywhere on the entire Korean Peninsula soon.