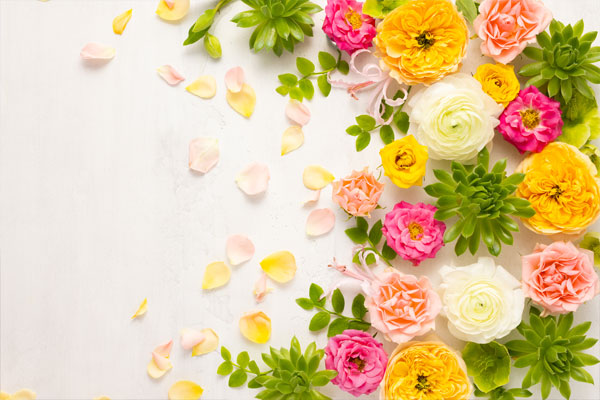 For North Korean people, flowers are a very familiar cultural symbol. You’ve probably seen videos of North Korean crowds waving flowers at a massive military parade or on important anniversaries at the Kim Il-sung Square in Pyongyang. Many of North Korean art works feature the theme of flowers as the symbol of the Korean race. Flowers mentioned by top leaders were in the spotlight during certain periods. Those flowers include magnolia, roses and sunflowers.

Flowers are one of the most popular gifts exchanged on special occasions. In North Korea, flowers are actively used as the theme of industrial art designs for cards, brands and clothing patterns.

Today, we’ll learn about the image of flowers in North Korea’s industrial design from Professor Choi Hee Sun from the Graduate School of Arts at Chung-Ang University.

North Koreans use flowers as a means of expressing their loyalty to the party and the leader. Despite economic difficulties, demand for flowers continues to rise in the North.

When exchanging gifts on special occasions, locals never forget flowers. They also offer flower baskets or wreaths on the anniversary of the death of former leader Kim Il-sung and the founding anniversaries of the party and the state. Since Kim Jong-un came to power, the local media have publicized women-related days such as March 8 International Women’s Day and Mother’s Day that was created in 2012. Flowers are presented on these occasions as well, with more people consuming flowers, both real and artificial ones.

As flowers are widely used in everyday life in North Korea, flower-themed designs are found in many daily goods. It is the Central Industrial Art Guidance Bureau that oversees everything related to design.

In the North, industrial art designs have to do with party policies and relevant tasks. Designs are created by the Mansudae Art Studio’s design team or art faculties at Pyongyang University of Fine Arts. Floral designs are often used for brands, finishing materials, curtains, tablecloths and furniture. Former leader Kim Jong-il showed great interest in products with flower-themed brands. He even created a brand name “Cosmos” for hairpins produced by the Pyongyang Taesong Jewel Processing Factory. “Azalea” is the name of a North Korean smartphone model, and a local socks factory produces goods using the brand of “Royal Azalea.” The Dandelion Notebook Factory releases stationery goods under the brand of “Dandelion,” while “Sunflower” is the signature brand of the Yongbong School Supply Factory.

In North Korea, there are flowers named after former leaders Kim Il-sung and Kim Jong-il, namely, Kimilsungia and Kimjongilia. North Korea built greenhouses all across the nation to grow these flowers and holds various relevant events every year. When Kim Il-sung visited Indonesia in 1965, then-Indonesian President Sukarno gave a flower to the North Korean leader as a gift. The flower was later named after the leader. The Kim Jong-il flower was presented by Japanese botanist Kamo Mototeru to commemorate Kim Jong-il’s 46th birthday in February in 1988.

The Kim Il-sung flower festival takes place in Pyongyang in April almost every year as part of celebratory events marking the former leader’s birthday known as the Day of the Sun. It is a large-scale event. To commemorate the 100th anniversary of his birth in 2012, some 27,600 flowers were displayed. It is said that the Kim Jong-il flower festival in 2012 was as magnificent as the one dedicated to the Kim Il-sung flower. The two flowers have their own respective exhibition halls. During the festivals, the Cabinet, enterprises, military units and collective farms compete to exhibit flowers they have cultivated to show off their sincerity, group work and achievements. Not only flowers, they also display miniature apartments of Pyongyang and some products as well. Through these events, they demonstrate their loyalty to the leaders.

Azaleas, royal azaleas and mokran, a kind of magnolia, are especially loved by North Korean people, and those flowers were even used for banknote designs. North Korea designated mokran as the national flower in 1991. Lately, the sunflower has emerged as the flower of loyalty.

During an event commemorate the 75th anniversary of the foundation of a youth group in June this year, sunflowers decorated the stage as the flower of loyalty to Kim Jong-un. Last year and this year, the leader gave school supplies with the brand of “Sunflower” to children ready to enter kindergartens and elementary schools. The school supplies feature the design of sunflowers. North Korea seems to be promoting sunflowers as the flower of loyalty or single-hearted devotion to the leader. It seems the myth that sunflowers always follow the sun is well received in North Korea, a country of one-man leadership.

Around the Lunar New Year holiday early this year, North Korea released a photo book that shows a man and woman clad in the Korean traditional clothing of hanbok.

It shows flower patterns embroidered on the sleeves of the upper garment and the lower part of the skirt.

Floral patterns are commonly used for women’s clothing and bedding. Bedclothes with showy flower patterns were displayed at the 2012 National Industrial Art Exhibition. Designs of various flowers including white and pink roses are used to make the traditional attire even more elegant and gorgeous. The rose pattern, in particular, is very distinctive. I think this has to do with former leader Kim Jong-il’s instruction to plant roses in Pyongyang in 2011.

In North Korea, flowers are a very attractive theme for design, and floral patterns are widely used in industrial art to represent the country’s national identity. They show one of the major characteristics of North Korea’s industrial art and they could also reflect what life is like in North Korea in particular time periods.

North Korean leader Kim Jong-un has stressed the importance of design since he took power. The country has held the National Industrial Art Exhibition every year since 2012, promoting the development of the design industry as one of the economic achievements. The country will likely continue to actively use flower designs in all social sectors.