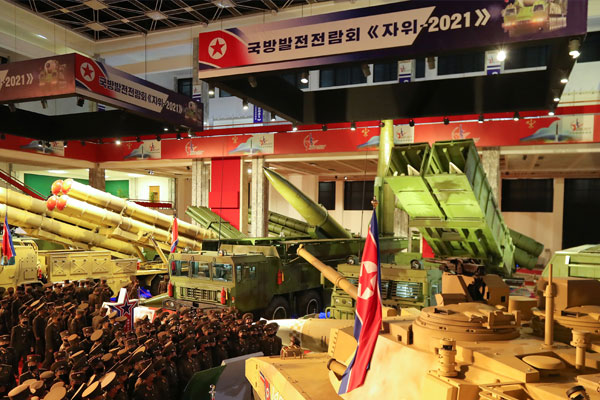 North Korea has conducted eight missile tests this year, including cruise missiles, short-range ballistic missiles, a supersonic missile and a new type of surface-to-air missile in September alone. This month, the North fired a submarine-launched ballistic missile or SLBM. The country also displayed high-tech weapons that it has developed over the last five years at a recent defense exhibition marking the 76th anniversary of the foundation of the Workers’ Party. Here is Hong Min, researcher at the Korea Institute for National Unification, to explain what North Korea has in mind behind these series of moves.

Considering various factors including the timing of missile launches, it seems North Korea unveiled its weapons quite strategically. Pyongyang is telling the outside world that its policy of weapons development will not change. The latest defense exhibition displayed almost every weapon that North Korea has shown through tests since 2017. It shows the country’s confidence in military buildup and its commitment to the continuous development and evolution of strategic and tactical weapons.

During this period, North Korea wanted to discuss the complete denuclearization of the Korean Peninsula and corresponding measures by the U.S. The two sides engaged in grueling negotiations over which one should come first. In brief, the agenda of denuclearization and the reciprocal action was put on the single table, and the negotiations proceeded on one track. In the process, North Korea signed agreements with South Korea and the U.S. at bilateral summits. In those agreements, the North included what it wanted to obtain, such as the declaration of a formal end to the Korean War, the lifting of sanctions and other peace-related measures.

Pyongyang’s foreign policy changed a lot after the second North Korea-U.S. summit failed to produce any visible outcome in Hanoi in 2019. North Korea continued to engage in talks with the U.S., but its attitude and the method of negotiations changed significantly.

While North Korea continued to focus on its negotiations with the U.S., it began to test strategic and tactical weapons that it had not developed for over a year, in a bid to pressure the U.S.  The North unveiled four new weapons from April 2019 until the end of that year. It believed that it could not get what it wanted from the U.S. under the previous negotiation format and it would inevitably engage in prolonged negotiations in order to induce the U.S. to change its attitude. The North thought it should continue to develop weapons until the U.S. brings new calculations to the negotiation table. North Korea also urged the U.S. to withdraw its hostile policy toward Pyongyang, setting another precondition.

During a speech at the recent defense exhibition, North Korean leader Kim Jong-un stressed that the country’s stronger military has the purpose of preventing war and increasing war deterrence for the protection of national sovereignty. He also said that North Korea’s “arch-enemy” is war itself, not South Korea, the U.S. or any other specific state or forces. He accused the U.S. of double standards over weapons testing and its hostile policy toward the North.

Research Hong says that North Korea’s strategy clearly changed from the eighth congress of the Workers’ Party in January this year.

During the party congress early this year, Kim Jong-un specifically mentioned weapons to be developed and those under development one by one. To our surprise, it seems that the North is developing advanced weapons with high strategic value. Expressing its commitment to weapons development, North Korea said its attitude would change, depending on how its negotiation partners may act. That is, the North suggested the principle of “hard-line for hard-line, goodwill for good will.”

Afterwards, Pyongyang began to pursue a two-track approach, in a major shift from the previous strategy. The change was detected in the North Korean leader’s speech at the Supreme People’s Assembly as well as at the recent defense exhibition. On one track, North Korea continues with weapons development. Separately, the country may engage in dialogue with the U.S. and South Korea and improve its relations with the countries, as long as they drop their double standards and hostile policy toward the North. In other words, Pyongyang employs two different tracks—one for weapons development and the other for diplomacy.

I imagine North Korea’s ultimate goal is to negotiate with the U.S. over limited nuclear disarmament after developing advanced nuclear weapons, while discussing limited arms control with South Korea.

Meanwhile, chief nuclear negotiators of South Korea and the U.S. have held a series of talks. Most recently, on October 24, U.S. special envoy for North Korea Sung Kim and his South Korean counterpart Noh Kyu-duk held a closed-door meeting in Seoul. After the meeting, Kim said that the two countries would cooperate to explore different ideas and initiatives, including the South Korean government’s proposal of declaring an official end to the Korean War. While he defined North Korea’s SLBM launch as a provocation, he said the U.S. harbors no hostile intent towards North Korea, calling for the resumption of dialogue again. His remarks show that the U.S. remains unchanged in its basic position about North Korea.

The U.S. sticks to its principle about unconditional dialogue and a solution to the North Korean problem through diplomacy, but it may examine how to handle North Korea’s two-track strategy. The North will likely continue to develop weapons and remind other countries that its weapons development is for self-defense. In the course of doing that, North Korea will leave the door open for inter-Korean dialogue and North Korea-U.S. talks as a buffer and use the principle of “hard-line for hard-line, goodwill for good will” to justify its weapons development.

Speaking of North Korea-China relations, October 25 marked the 71st anniversary of China’s participation in the Korean War. Kim Jong-un sent a wreath to a cemetery of fallen Chinese soldiers in the North, demonstrating friendship between the two communist allies. While North Korea is getting closer to China, it confronts South Korea and the U.S. and defends its missile launches as an act of self-defense. Against the backdrop, attention turns to the end-of-war declaration proposed by the Seoul government.

The end-of-war declaration is highly significant and it will serve as an effective negotiation card, no matter when and how it is implemented. South and North Korea have remained technically at war for nearly 70 years—a very rare case. It might be a mere political or symbolic declaration, but declaring an end to the war and hostility is absolutely necessary and worthwhile, regardless of the timing.

Involved countries also attach great significance to the declaration. North Korea has already asked the U.S. to declare an end to the war in view of trust-building in their negotiations. Pyongyang still thinks that the declaration is an important means of confirming Washington’s sincerity and its commitment to the North Korea policy. South Korea, for its part, believes that the declaration will be an important beginning in establishing trust between North Korea and the U.S., which have long been in hostile relations. South Korea is hugely enthusiastic about this matter. The Seoul government will focus on creating some common ground, on which the two Koreas and the U.S. can meet through the end-of-war declaration.

North Korea pledges to strengthen its military capabilities in light of self-defense and demands that South Korea and the U.S. make a choice. At the same time, it is carefully watching if the current situation will lead to a dialogue phase that would be advantageous to the North. It seems necessary to come up with specific and pragmatic measures to cope with North Korea’s changing strategy.