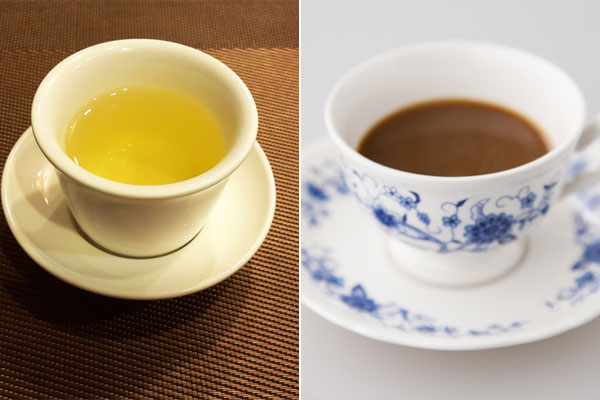 It is said that coffee and tea have become more common in North Korea these days, compared to the past.

In North Korea, people mostly drink tea when they don’t feel well or when they want to boost their health. Tea has a rather short history as an item of personal preference in the country. Under the regime of current leader Kim Jong-un, North Korea has encouraged people to enjoy their lives under the slogan of building a civilized socialist country. In this sense, we can say people having some tea in the North are enjoying a more civilized life. In South Korea, having coffee or tea has become an important element in social life and relevant industries have developed significantly. On a similar note, North Korea seeks to boost the domestic service industry and consumption by developing coffee and tea products, although the scale is small. Unlike in the past, tea and coffee houses and relevant products are found in the North these days, and they are used as a treat for guests.

Let’s talk about tea first. Major premium green tea-producing regions in South Korea include southern rural areas of Hadong in South Gyeongsang Province, Boseong in South Jeolla Province and Jeju Island. Tea plants thrive in warm regions. So it is easy to understand that North Korea’s cold climate doesn’t make it an ideal place to grow tea. Still, the country began to grow tea in the early 1980s under the rule of former leader Kim Il-sung.

For the most part, tea plants are grown in warm, southern regions. The most southwestern Chinese province of Yunnan is known for its tea cultivation. Tea is also grown in China’s Shandong Peninsula. When former North Korean leader Kim Il-sung visited the Shandong region, he thought that it would be possible to grow tea in some North Korean regions at similar latitudes. That’s how tea cultivation started in North Korea. But things didn’t turn out well for a long time, mainly due to climate issues. After 25 long years of research, North Korea finally succeeded in growing tea trees in regions with a cool climate. Still, tea can actually be cultivated in the country’s southernmost areas such as Kangryong(강령) in South Hwanghae Province, and Kosong in Kangwon Province. While the country has expanded tea cultivation area, tea production is still in its early stage. North Korea is known to produce only limited types of tea such as green tea, black tea and Tie Guan Yin tea.

North Korea offered special tea called Kangryong Green Tea during an official dinner at the inter-Korean summit in the truce village of Panmunjom in April 2018. North Korea offered the same tea, also known as Unjong Tea, at another inter-Korean summit in Pyongyang in September that year. Obviously, Unjong Tea that is grown in the Kangryong County is the premium North Korean tea brand. Named by former leader Kim Jong-il, “Unjong” means “affection of Kim Il-sung” and “repaying Kim Il-sung’s kindness.”

Many North Korean names and titles have the word “un,” which means “favor” or “benevolence.” The word is used to highlight the state’s careful consideration for the public or the top leader’s love for the people.

North Korea began to grow tea plants in 1982 but failed to produce results for a long time. In the country, tasting tea was a very special experience. Kangryong Green Tea was named Unjong Tea to underline the leader’s warm affection and hope that many more people could enjoy tea.

North Korea is known to have succeeded in cultivating tea in the late 2000s, some 25 years after it first planted tea trees. Then-leader Kim Jong-il visited the Unjong Tea-growing district to instruct officials to increase production of tea leaves and create a teahouse in Pyongyang.

The Unjong Teahouse opened in July 2012. While North Korea has to import coffee, it can grow tea locally and it has actually increased tea production. The teahouse offers green tea, of course, barley tea, buckwheat tea and corn silk tea. For citizens, it is a special meeting place, where teas are quite expensive. It seems teahouses are mostly located in Pyongyang. But they might spread to local regions when tea production increases further.

North Korean media agencies have recently delivered the news about the completion of the Unjong Tea Drink Factory, where Unjong Tea is produced as an industrial product, and introduced tea as a healthy drink. A user’s guide says that Kangryong Green Tea could prevent the hardening of the arteries and blood clots in the brain and lower blood pressure. The tea is also believed to help strengthen the heart, improve blood circulation, boost metabolism and promote bowel movement, digestive functions and various motor skills. The tea could serve as a powerful germ killer, prevent colitis and protect the intestine. It is even written that the tea helps reduce radiation side effects.

Proper nutrition and health management are one of the important elements of North Korea’s public healthcare. In this vein, North Korea encourages people to drink tea, which has numerous health benefits. North Korea explains that Kangryong Green Tea has the effect of remedying radiation damage. It sounds rather exaggerated, but what it is trying to say is that it is necessary to have tea, which is healthier than any other drink. But I think North Korea promotes tea consumption mainly for economic reasons. North Korea relies entirely on imports for coffee or cocoa. Amid harsh international sanctions, the country focuses more on the local production of tea with domestic technology.

Coffee is as popular as Unjong Tea in North Korea. Along with apartments and sauna, coffee is one of the keywords that represent the upper class in the country now. That is, coffee symbolizes sophistication and civilization. In fact, coffee had long been inaccessible to the general public in North Korea because it was associated with a taste of capitalism.

When coffee was introduced to Korea, it was first consumed in the royal court. It is said that King Gojong drank so much coffee that he was believed to be addicted. Coffee made its way to North Korea slowly, as the country couldn’t produce it on its own. But now, coffee has expanded its presence in the North significantly.

After the Korean War, coffee was known to North Korea gradually through foreign diplomats residing in Pyongyang. Coffee culture directly entered the country from outside when ethnic Koreans in Japan migrated to North Korea. It was under the so-called “repatriation program” sponsored by a pro-North Korean residents’ league in Japan.

In North Korea, coffee symbolizes capitalistic culture, like pizza and coke. North Korean movies show scenes of people drinking coffee to describe South Korean society. In the North, it was difficult to popularize coffee that is linked to the image of capitalism.

It was the Gaeseong Industrial Complex that played a major role in spreading coffee among the North Korean public. South Korean companies doing business at the inter-Korean joint industrial park used to provide instant coffee powder to North Korean laborers working there. The coffee mix packet contains powdered coffee, sugar and cream for a single serving. The bittersweet instant coffee mix captivated the taste buds of North Korean residents, who even said that a civilized life is about drinking the coffee mix.

South Korean manufacturers at the Gaeseong Industrial Park handed out Choco Pie snacks, cup noodles and the instant coffee powder to North Korean workers there. At first, the workers wondered why people drank coffee that tastes bitter. After having a cup of coffee, some workers appeared at the workplace the next day with their eyes bloodshot from the lack of sleep.

Clearly, caffeine made them stay alert. But for the very reason, workers began to drink coffee to alleviate fatigue and promote wakefulness. They were soon used to the South Korean instant coffee mix, which became pretty popular. Some even reserved a few packets to give them to their acquaintances or treat guests. The instant coffee mix packets began to appear at the private market or jangmadang, and the word of mouth spread fast to the rest of the country. Indeed, the Gaeseong Industrial Complex contributed greatly to spreading coffee culture in North Korea and improving the negative image of coffee.

Before the Arduous March period in the 1990s, ethnic Koreans from Japan introduced coffee to some members of the upper class in North Korea in big cities including Pyongyang, Chongjin and Hamhung. Later, North Korean workers at the Gaeseong Industrial Complex spread coffee culture by supplying South Korean instant coffee mix to the market. Even after the shutdown of the complex in 2016, the instant powdered coffee still remained popular.

Coffee, sugar and cream contained in the coffee mix may relieve tension and they have an addictive quality. That’s why many North Koreans were disappointed at the closure of the industrial park. North Korea began to produce its own instant coffee brand named Sambok to replace the three-in-one instant coffee mix packets. Sambok means “three blessings.” With each package weighing 12 grams, it looks just like South Korean instant coffee mix.

It seems the production of Sambok coffee has decreased since 2019, when the North Korea-U.S. summit in Hanoi collapsed. I guess coffee imports and the local production of coffee products have declined due to the worsening relations between North Korea and the outside world, as well as a change in Pyongyang’s foreign policy.

It is not easy for North Korea to import coffee due to the prolonged international sanctions on the country and the pandemic-induced border shutdown. It is little wonder that coffee prices are exorbitantly high. Reports say that a packet of coffee and a packet of black tea in Pyongyang last year were priced at as high as 100 US dollars and 70 dollars, respectively. Despite the high prices, demand for coffee remains strong, while the culture of enjoying tea is also spreading slowly.

Before the COVID-19 outbreak, North Korea pursued openness as it hoped to promote its image as a normal socialist state. In terms of cultural diversity, the North will likely create more places to enjoy coffee. Still, I imagine it will focus more on spreading tea culture using locally produced tea. That is to say, North Korea may use a two-track policy of separating two different areas—coffee for foreigners and the upper class, and tea for the general public.

More and more North Koreans are drinking coffee and tea, with the number of coffee and tea houses on the rise. But it still seems to be hard for ordinary citizens to afford these beverages, due to the food shortage and the border closure. For the local residents to enjoy coffee and tea drinks comfortably, North Korea needs to carry out exchanges with the outside world more actively and develop the economy as well.