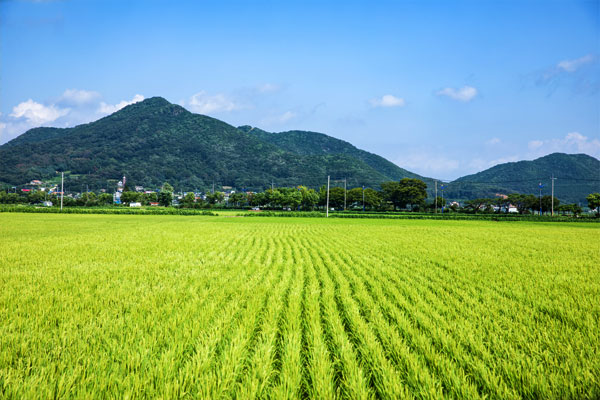 Agriculture is considered important in North Korea, of course, since the country should feed its people. Agriculture plays an important role in enabling the state to acquire the capital needed for early-stage economic development. The industry also forms a basis, on which North Korea’s socialist economy is complete.

I visited North Korea for the first time in 1998, when the Arduous March period was almost over. At the time, local farms were extremely poor and productivity was low. I visited North Korea’s farming villages again in the 2000s, when South and North Korea carried out agricultural cooperation projects vigorously. The farming environment didn’t seem to improve overall, though. Due to inadequate irrigation facilities and infertile soil, it was hard to expect the country to produce enough agricultural products.

South and North Korea share similarities in terms of the size of farmland, the natural environment, living culture and the agricultural environment. However, there is a wide gap in productivity, due to the differences in the methods of farming and agricultural infrastructure.

The total area of farmland in South Korea is about one-point-nine million hectares, similar to North Korea’s. The two Koreas share similar natural conditions including the climate. Both countries typically grow rice, corn and soybeans, and raise similar vegetables.

But South Korea has more flatlands than the North. 55 percent of its paddy fields are for rice cultivation, while the other 45 percent are for other crops. The proportion is 30 to 70 in the North, where a considerable part of the land area consists of mountains and uplands.

North Korea aims at self-reliant food production. That’s why the country seeks to make the most of its farmland, even raising two crops on the same field in one year in some regions. South Korea, on the other hand, lets many land areas lie fallow because it is considered inefficient to raise crops there. It imports farm products or food from overseas instead.

North Korea’s agricultural productivity is low—about two-thirds of South Korea’s—due mainly to the lack of relevant facilities and materials as well as devastated forests.

In South Korea, agriculture is mostly about family farming and commercialized farming, while North Korea’s agriculture centers on collective farming. This is the biggest difference between the two in agriculture.

A collective farm is created from many small holdings collected into a single unit, where multiple farmers produce crops based on joint labor. Collective farming comprises the basis of North Korea’s agriculture.

North Korea’s land reform involved confiscating land from large landowners and redistributing it to land-poor farmers and farm laborers. Upon the completion of the reform, the North started implementing the collective farming system. By gathering the land-poor farmers, North Korea created a collective farm in each administrative unit. The project started in 1953. In only five years, by 1958, farms in the country were all collectivized. In the process, family farming disappeared, while local farmers joined collective farms in their region. The remaining cropland was nationalized and made into state farms. A collective farm is generally made up of 300 to 500 people, covering about 500 hectares of land.

Collective farming is not just about farmers working together. Collective farms are regrouped by villages and are jointly owned and managed at the village level. A collective farm serves as an administrative unit, a living community and an organization that produces farm products. Researcher Kim explains the structure of collective farms.

A collective farm has production and management organizations. The production organization has three to ten working groups, with each working group carrying out its own specific task such as producing crops or vegetables. The working groups have subgroups, which are the smallest management units. Each subgroup had some 20 members in the early 1990s, but the number has fallen drastically now.

The management organization deals with administrative affairs of the collective farm as well as planning and training. As a living community, a collective farm has a school, a childcare center, a public health center, cultural facilities and stores.

Collective farms pay fees for land use to the state, which gives the farms targeted quotas to fulfill.

The state provides collective farms with what is needed for farming, including fertilizer, pesticides, agricultural techniques and basic infrastructure. In return, the farms sell their products to the state at low government prices. The state then distributes the farm products to the public.

North Korea attempted to apply various farming techniques to collective farms. For example, the Chongsan-ri method was proposed by North Korea’s founder Kim Il-sung when he inspected a collective farm with the same name. It calls for higher-level offices and superiors to help out lower-level offices and subordinates, and to conduct on-site inspections to figure out the situation correctly and solve problems properly.

Another technique called the Juche farming method emerged in the early 1970s in the process of overcoming climate conditions and looking for a new method of increasing agricultural output.

The Juche farming method was created under the instruction of Kim Il-sung in 1973. While visiting collective farms, he saw the need for the introduction of science and technology in all farming procedures, including the management of soil and seedbeds. The method advocated intensive farming.

But the ideology-based method had limitations. It failed to cope with climate change properly. When inter-Korean agricultural cooperation remained active in the early-and mid-2000s, many South Korean agricultural scientists and specialists visited North Korea to examine the farming situation there. They were surprised to see grain seeds planted so close together. They suspected that the outdated method would result in soil exhaustion and a decrease in output eventually. North Korea relies less on this farming technique now, but that’s one clear example of the limits the Juche method revealed.

Following the collapse of the socialist system around the world in the 1990s, North Korea faced a serious crisis. It was difficult for the country to import chemical fertilizer, energy, agricultural equipment and tires needed for farming. To make matters worse, North Korea was hit hard by natural disasters, with its agriculture in crisis. Agricultural output plunged and production facilities were damaged.

As a result, the food rationing system was suspended and countless people suffered from starvation, signaling the start of the Arduous March. To tackle the crisis, North Korea had to change the existing agricultural production system.

In 1966, North Korea introduced a sub-group contract system, which gives incentives to individual farmers in smaller sub-groups if they surpass their production quota and produce surplus. But the state did not offer the benefit in kind to the farmers, but allowed them to sell their surplus to the state at low state prices. So, even if the farmers produced surplus, they earned only a small amount of money, which was not considered an incentive.

North Korea enacted agricultural reform in 1996 when it was hit by the economic and food crisis. Under the reform measure, the surplus would be given back to farmers in the form of the crops they had cultivated. If they received rice as incentives, they could sell it at the market at high prices to make a profit. The purpose of the new measure was to motivate farmers to work harder and increase productivity.

However, there’s no proof that North Korea’s food production increased quickly after the reform. Perhaps, the new system was not actually implemented or ended in failure. North Korea enforced agricultural reform measures several times, but they do not seem to have worked well.

The innovative agricultural reform measure in 1996, known as the sub-group management system, did not lead to higher productivity. After Kim Jong-un came to power, North Korea presented various policies, including allowing collective farms to freely dispose of excess crops after having met their production target.

The phrase “pojeon system” first emerged in North Korea in 2002. Pojeon refers to a small field or plot cultivated by family. Since 2012, the pojeon system or the field management system has been mentioned a lot. We’ve examined many North Korean documents but we have yet to clarify how the system works. Some explain that each family is given a field and has the right to manage it. But we assume that farmers bear even greater responsibility for production under the system, rather than enjoy management autonomy.

If individual farmers had been allowed to manage their fields and sell their products of their own free will, they would have fully enjoyed incentives and agricultural productivity would have increased significantly. Since 2012, however, North Korea’s food production and agricultural output have not shown any visible change. The pojeon system may have not operated in farming villages in reality or we may have misinterpreted the system from the beginning.

It seems North Korea attempted various reform measures to boost agricultural productivity but no substantial progress was made.