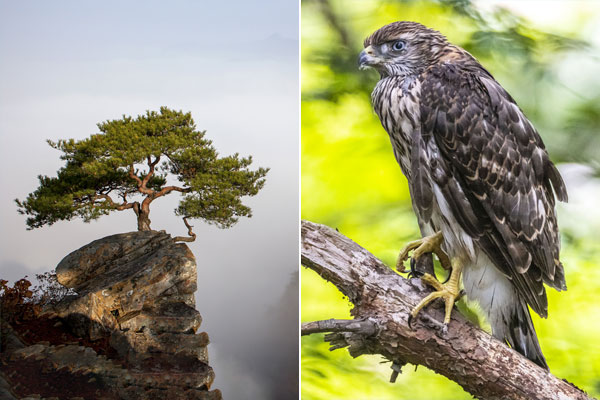 North Korea published a book titled “National Symbols of Korea” in 2018. In the book, the country introduced various state symbols such as its official name, emblem, flag, anthem, language, flower, tree, bird, dog and liquor. Among them, the name, emblem, flag and anthem are known to have been created when the country was established.

North Korea’s official name is the Democratic People’s Republic of Korea. North Korean people refer to their national flag as a phrase translated as the “blue-and red-colored flag of the republic.”

South Korea’s national emblem consists of the taegeuk symbol surrounded by five petals of Rose of Sharon, which is the national flower, and a ribbon featuring the inscription of the country’s official name in Korean. The emblem is printed on the front cover of Korean passports. It is used on official documents sent to institutions overseas and on diplomatic office buildings outside Korea.

North Korea’s state emblem, meanwhile, shows a red star at the top and Mt. Baekdu at the center. The red star symbolizes the glory of revolution, while the mountain implies the sacred place of revolution. A hydroelectric dam and a steel tower are seen at the bottom, representing industries and workers. The symbols are encircled by ears of rice, which means agriculture.

North Korea designated the Pungsan dog as the national breed in 2014 and pine as the national tree in 2015. Both designations were made after Kim Jong-un came to power. The country also began to pay more attention to the national bird of goshawk and the national flower of magnolia, which had been registered as state symbols earlier.

The North is known to have begun to put emphasis on national symbols in the second half of 2018 as part of the project to promote national pride and patriotism. Starting November 2018, the official Rodong Sinmun newspaper covered the stories about the national tree, dog, bird and flower one after another. The following year, stories about the country’s official name, emblem, anthem and language were published serially.

In his New Year’s message in 2019, leader Kim Jong-un underlined the principle of “Our State First.” From then on, North Korea placed greater emphasis on state symbols. On January 1, 2019, the Rodong Sinmun newspaper carried the musical score of the song “Our National Flag,” along with the leader’s autograph. Derived from North Koreans’ intense pride in their great socialist homeland, the “Our State First” principle was highlighted by national symbols.

The principle first appeared after North Korea stressed its elevated status following its successful Hwasong-15 missile launch in 2017. Afterwards, the phrase became a key expression in the country’s ruling ideology. In line with the country’s efforts to publicize the principle, national symbols were considered highly important.

What grabs our attention is that North Korea designated a dog and a tree as state symbols after Kim Jong-un became the leader of the regime and showed greater interest in the national bird and flower, compared to the past. Researcher Oh explains why.

While the national emblem, flag and anthem represent the country using particular design, color or music, the national tree, flower, dog and bird are plants and animals indigenous to the Korean Peninsula. They have both historical and political implications. The pine tree involves the country’s efforts to restore and protect forests, while the Pungsan dog and the goshawk are associated with animal protection and ecological preservation. By stressing these symbols related to plants and animals, North Korea seeks to strengthen internal unity and promote its national image overseas. Notably, Kim Jong-un has used the ecological environment for political purposes.

The Pungsan dog was registered as natural monument No. 368 in 1956. Its origin, Kim Hyong Gwon County, was designated as the natural monument preservation area in 1968. It had formerly been called Pungsan County, which the dog was named after. Since the breed originates in the remote mountainous region, North Korea claims that the species has preserved its pure bloodline.

It is said that the dog is gentle and smart but brave and has a good fighting spirit at the same time. North Korea believes the dog shares many things with Koreans in terms of temperament and that why Koreans have loved the dog since ancient times. Legend has it that the dog even defeated a tiger and saved its master from a fire at the cost of its own life. Citing the reasons, North Korea says the fine hunting breed full of vitality was made a national dog.

As a tree representing Korea, pine symbolizes unchanging loyalty. The phrase “the pine tree” appears in South Korea’s national anthem. Some 40 types of pine trees have a natural monument designation—the largest number for a single species of tree. South Koreans adore pine trees, which often top the list of their favorite tree. So do North Koreans.

There are three main reasons why North Korea named pine as the national tree. First, pine trees have grown in almost all regions, with locals regarding them as a part of nature. Korean ancestors enjoyed drawing pine trees in their paintings. Second, pine trees stay green all the time in the face of fierce wind, snow and frost. The trees are believed to symbolize the indomitable Korean people who have refused to yield to foreign invaders but have chosen to rise up against them in their long history. Third, pine is the most widespread tree species and its number is the highest among all other trees in North Korea.

Mokran, a kind of magnolia, was endorsed as North Korea’s national flower in 1991. Known by other names such as Magnolia Sieboldii or mountain magnolia, mokran was named by the regime founder Kim Il-sung himself in the 1960s.

The national bird of goshawk, or chammae in Korean, received official state designation in 2008 under former leader Kim Jong-il’s rule. It is so highly valued that current leader Kim jong-un’s private jet, Chammae-1, was named after the bird.

Mokran became North Korea’s state flower in April 1991. North Koreans have loved this flower that looks beautiful, strong, humble yet elegant. In recent years, the North has highlighted the flower, along with pine trees, when planting roadside trees and creating parks.

Chammae or goshawk was picked as the national bird in 2008. Historically, Koreans used the goshawk in falconry for hunting and felt proud to tame the brave bird. North Korea explains the bird’s bravery, agility and appearance are similar to Koreans’. Its close relationship to humans was one of the factors in naming it as the national bird. Both the goshawk and the Pungsan dog are natural monuments in North Korea. The state symbols also have to do with the country’s emphasis on protecting natural monuments.

North Korea has repeatedly brought to light the plants and animals that became state symbols, resulting in a change in various social areas. For example, more pine trees have been planted as part of the nation’s forest restoration campaign. In fact, pine trees are more like ornamental trees, so they are likely to draw less attention, compared to economic forests like medicinal trees. However, it seems pine trees, as a national symbol, have been given priority.

North Korea has highly praised the pine tree since it became the national tree. It has encouraged the cultivation of a black pine tree species, in particular, as it grows quickly and is resistant to blight.

Pine forests have been created as tourist zones, gaining renewed attention. The Songdowon pine forests on the east coast are one of the famous natural habitats of pine trees in North Korea. The country notes that the forests were formed along the coast 700 years ago and North Korean founder Kim Il-sung stressed the need for proper measures to protect and manage the old pine trees. Former leader Kim Jong-il once said that the old pine trees in Songdowon were the national asset that is more precious than gold, instructing his officials to protect them extremely carefully so not even a single tree would die.

Other well-known pine forests are located at Mt. Chilbo, Mt. Myohyang and Mt. Guwol. The gorgeous forests are turning into scenic spots.

When touching on the subject of art education in 2018, the Rodong Sinmun newspaper underlined the need to teach students in local schools how to describe state symbols beautifully. It seems the aesthetic standards in art are changing as well.

The ecological environment associated with state symbols is bringing a change to many different areas such as tourism, education, and culture and art. The local art community, for example, stresses the need to include the national tree and flower in paintings drawn in traditional Korean style. The trend was well evidenced in an art exhibition in 2019. Artists across North Korea exhibited some 150 artworks featuring the theme of pine trees. There were news reports indicating that artists in Jagang Province climbed a snow-covered mountain to better portray pine trees.

North Korea also sheds light on the goshawk and the Pungsan dog. Sculptures themed with the national tree, flower and dog reportedly attracted attention at a 2019 sculpture exhibition.

In May 2021, North Korea’s state-run Korean Central News Agency reported that wild animal protection zones were being inspected nationwide. The agency said the country is pushing for a project to establish areas where the eco-system was well preserved as new protection zones. This project also involves the state symbols of the goshawk, the Pungsan dog and pine trees. Apparently, greater emphasis is being placed on the status and role of national plants and animals, which are influencing the state policy of protecting the ecological environment.

In the Voluntary National Review submitted by North Korea to the U.N. in July 2021, the country specifies plans about environment protection, forestation and biodiversity. Obviously, North Korea seeks to create a favorable environment for its economic development by showing interest in international cooperation on ecological issues. The Kim Jong-un regime, unlike its predecessors, focuses on the ecological environment and intends to develop the economy AND protect the environment at the same time. There has actually been debate on environmental and ecological issues in North Korean society.

With these issues becoming increasingly important globally, South and North Korea could join forces in this area. Hopefully, the ecology-motivated politics in the Kim Jong-un era will contribute to improving the ecological environment in the Korean Peninsula.

Regarding North Korea’s designation of plants and animals as state symbols and the wide use of them in society, some analysts say North Korea is seeking to beef up internal solidarity and secure a status as a normal state in the international community. We hope this trend will actually lead North Korean society to change in a desirable direction.