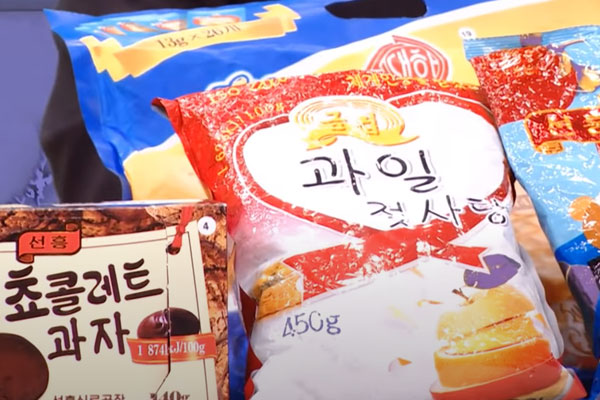 I would take photos of North Korea in China across the Yallu River and the Tumen River. But it has been difficult to travel abroad in recent years due to the COVID-19 pandemic.

In South Korea, one can look at North Korea up close from five West Sea islands, including Baengnyeong Island and Yeonpyeong Island. So I went to the regions to take some photos. There, I happened to see some North Korean trash, including product wrappers.

Product packaging shows what kinds of goods North Korea produces, how it designs its products and what it wants to emphasize. Local factories and main ingredients of the products are printed on the wrappers. The information indicated on them is valuable research material, as it offers a glimpse into how the North Korean economy works now.

Professor Kang has collected some two-thousand North Korean product packaging bags, pouches and containers over the past year. Of them, he has classified and analyzed one-thousand-400 ones. It is said that snack food wrappers make up a large portion of the trash items washing onto the beaches of the South Korean border islands.

The Pyongyang Goksan Factory is probably the most famous candy producing factory in North Korea. Leader Kim Jong-un himself has inspected the place before. The factory produces goods under its own brand, Unhasu, which means “Milky Way.”

It is interesting that North Korean factories have their own product brands. For example, the GeumCup General Foodstuff Factory for Sportspeople manufactures confectionery under its brand, GeumCup.

The Korean War armistice agreement was signed on July 27, 1953, but the day is celebrated in North Korea as Victory Day. The November 2 Factory of the Korean People’s Army is known to provide military supplies but it also produces candy. The factory’s brand, Victory, is printed on its candy wrappers, reflecting that the brand is associated with political ideology. It shows a contrast to brand naming in capitalist countries, where a brand is chosen to introduce a particular product and draw attention from consumers.

Ingredient labels and nutritional values are printed on packaging materials of North Korean cookies and bread, just like those in other countries. A cookie product called “Children’s Cookie” produced by the Sosan Ryomyong Foodstuff Factory lists flour, granulated sugar, milk powder, kelp powder and butter as main ingredients. Its packaging bag also reads that the cookie has 65.8 grams of carbohydrates and 18.1 grams of fat per 100 grams.

Interestingly, benefits of spirulina are highlighted on a bakery bag. North Korea touts spirulina as the most ideal foodstuff of the 21st century and makes a variety of relevant products.

The phrase “providing nutrients to children” is written on the packaging bag of the spirulina bread. Spirulina, a kind of algae, is rich in nutrients. In fact, many North Korean children are undernourished, and the country finds it difficult to provide sufficient nutrients to children. It seems North Korea tries to obtain some nutrients from nature and makes snacks using the substances to distribute them to children.

The Songdowon General Foodstuffs Factory produces “spirulina cream-filled sponge cake.” On the back of its packaging bag, it is written that the healthy instant food helps children grow taller and promotes their brain development and growth. For adults, it says it helps lower the risks of diabetes, heart disease and hardening of the arteries to prevent aging.

Other than spirulina-related products, many North Korean snacks include the phrase “good for health” on their packaging materials. A snack food product manufactured by the Sonhung Foodstuff Factory says on its wrapper that it contains vitamin and mineral substances indispensable for the human body and it does not trigger indigestion.

Also, the phrases, “stimulation of growth in kids’ height” and “clear, elastic skin” are written on the cover of a collagen ice pop produced by the O-Il Health Drinks Factory. Similarly, a fruit, yogurt-flavored popsicle indicates on its wrapper that it quenches thirst, promotes growth and increases good bacteria in the intestine. They sound like a cure-all. Professor Kang continues.

Notably, QR codes or barcodes are printed on most North Korean packaging materials. If you scan a QR code on a smartphone, you can find basic information about the product, such as its name, the area of production and main ingredients.

Like many other countries, North Korea makes use of particular characters to publicize products more effectively. For the packaging of cookies, bread and candies, in particular, manufacturers use animated film characters adored by children. “Clever Raccoon Dog” is a good example. The North Korean animated TV series produced by Scientific Educational Korea (SEK) Studio is hugely popular in the country.

Animation characters have appeared on the cover of many North Korean snack products. Some imitated the Hello Kitty character. Apparently, Leader Kim Jong-un was unhappy about that. He reminded officials that the country has its own characters.

As a result, “Clever Raccoon Dog” has been used as a popular character not only for snacks but other products including shoes. By letting young children find their friendly character in snack products, Kim promotes his image as a leader who cares for his people.

North Korea highly values its own fonts, not just in terms of design but for the purpose of ideology education. Fonts have special implications in signs, billboards and product packaging. Fonts used on the cover of snack products are so diverse that very few of them are redundant.

North Korea tells its people not to speak in a way South Koreans talk and not to use South Korean-style fonts as well. North Korea does have its own fonts, which are unfamiliar in the South. We can recognize a North Korean snack product just by looking at a particular font on its wrapper.

I once picked up the North Korean packaging bag of “Walnut Sponge Cake.” On the bag, the phrase, “good for health in the morning,” the name of the factory and the production site were all written in different fonts. Six or even more fonts were used for a single packaging bag. It shows that North Korea places great emphasis on design, color and fonts when it comes to product packaging.

In North Korea, juice is called sweet water and soda is known as carbonated sweet water, which can be flavored with various types of fruit such as peach, tangerine, pear and apple.

Among the soda products, the apple-flavored Sprite produced by the Rakrang Foodstuff Factory and the peach-flavored soda from the Surim Foodstuff Factory list a particular substance, instead of granulated sugar, as one of their main ingredients. Professor Kang explains this sugar substitute indigenous to North Korea.

Some soda products are blended with a sweetener, known locally as August plant sugar. North Korea even promotes a processing factory in Pyongyang where the flavor of sweetness is extracted from a local plant called August plant. North Korea doesn’t have to bother using this method, if it can afford to operate sugar factories or import granulated sugar. The home-based sugar substitute indicates that the country seeks to produce goods domestically, using ingredients available in local regions.

Other than juice or soda packaging materials, Professor Kang discovered containers of various functional beverages including spring water and hydrogen water that give special emphasis to health benefits.

The container of spring water produced by the Koryo Oriental Spring Water Factory shows a phrase, “slightly alkaline spring water, with dozens of microelements essential for good health, conducive to long life.” Similarly, on the container of hydrogen water from the O-Il General Processing Factory, one can find a phrase, “new wonder of the 21st century, the most effective and ideal antioxidant.” It sounds like the benefits are rather exaggerated.

Beverage containers I discovered were either PET bottles or plastic pouches. PET bottles range from 500-milliliter ones to 1.5-liter ones. They are similar to those in South Korea. Plastic drink pouches with a capacity of 100 or 200 milliliters are squeeze pouches, just like South Korea’s. Most North Korean trash items retrieved were PET bottles.

I’ve never found cans and glass bottles. I guess glass products were broken in the course of being washed up by the waves. Cans are recycled in South Korea at high prices. Likewise, beverage cans might be reused in the North, where raw materials and resources are insufficient.

Product packaging shows the current state and trends of commodity production. It is one of the important, indirect indicators to reveal how the North Korean economy actually works at present.