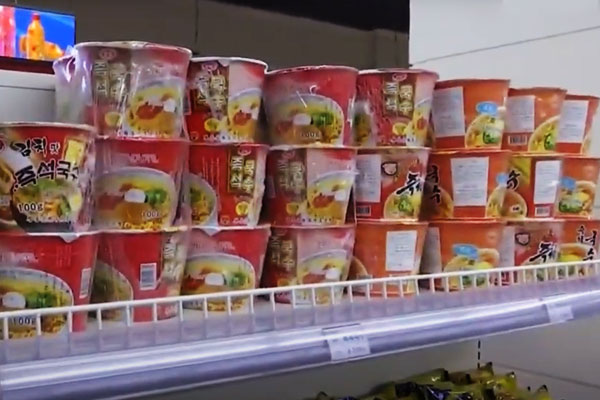 While analyzing North Korean product wrappers that washed up on the beaches of five West Sea islands in South Korea, Professor Kang felt that North Korean goods were more diverse than he had thought.

Other than snack, dairy and food products, I found a large number of wrappers used for general merchandise, including toothpastes, toothbrushes, soap, detergents and even sanitary pads.

It seems North Korea has manufactured various kinds of products since 2016, when leader Kim Jong-un mentioned the need to diversify consumer goods. Apparently, he sought to improve public livelihoods and promote his image as a leader who cares for his people. Since then, North Korea has produced goods that were different from previous ones in terms of design and color. Under the leader’s instruction, North Korea has focused more on producing a variety of consumer goods.

The product released by the Taesongchon General Foodstuff Factory, for example, reads that this instant noodle consists of good-quality noodle strips and its delicate and spicy flavors blend well to stimulate the appetite. The recipe tells users to boil 550 milliliters of water with soup base, add noodles and cook for two more minutes. Flour, refined oil, beef powder, chicken powder, red pepper powder, salt, black pepper powder, ginger powder, mushroom powder, dried green onions and dried carrots are listed as main ingredients. It says it does not contain any preservatives or bleaching powder. Acceptable temperatures and humidity for storage and its shelf life are printed as well. Professor Kang continues.

Not just the image, the two different products share much in common in terms of color and design used for the packing. Simply looking at the design on the cover, it is difficult to tell the North Korean product from the South Korean one.

produce various types of instant noodles under their own brands. Notably, many different products share a similar packaging design. For example, the packing bags of beef-flavored products from two different factories look almost the same, although the letters “instant noodles” printed on the cover are slightly different in terms of thickness and length.

In North Korea, each factory manufactures its own products, but the product design is similar to that of other factories. There might be slight differences, though. Fonts, for example, may vary in slope. This can be understood in the context of the so-called socialist competition in the North. In South Korea, products from different companies look completely different in most cases. That’s not the case in the North.

North Korea explains that socialist competition induces a unit performing better to help out a unit lagging behind and encourages the latter to catch up with the former so all units can move forward together. Using similar designs could be considered a design infringement in a capitalistic market economy. But it seems the same practice is allowed in North Korea in the name of socialist competition.

Professor Kang also collected many North Korean packages of seasonings such as flavor enhancers, black pepper powder and red pepper powder. Flavor enhancers are produced at local factories such as the Myohyang Trading Company and the Unha Taesong Foodstuff Factory. Images of a chef and various food items are described on the package of most flavor enhancers.

The package of flavor enhancers shows directions and types of food they can be applied to, such as soup, fried or deep-fried food, vegetable dishes, meat and fish. On the cover of one product, it is written that users can put about five grams of the flavor enhancer in warm soup and increase the amount little by little to add flavor.

Professor Kang found packaging materials of various other North Korean foodstuffs as well. The sausage product from the GeumCup General Foodstuff Factory for Sportspeople shows its image, grams and the name of the factory on the front, and main ingredients like pork, garlic and black pepper are printed on the back. It is also written that the product should be stored at a temperature between zero and four degrees Celsius and its shelf life is one month.

Another interesting example is the packaging material of vacuum freeze-drying puffer fish with the brand name of Konapo. It seems the processed puffer fish products are manufactured in North Korea.

Professor Kang now tells us about wrappers used for fake meat made out of beans.

The fake meat made from soybeans is consumed in North Korea as a substitute for meat as a protein provider. It is said that the man-made meat was created at the lab of a technical college in Nampo. The product wrapper features the image of green soybeans. We also picked up the wrapper of processed soybean fake meat produced by a local trading firm.

Liquor products actually accounted for the largest part of North Korean finished goods I collected in the North Korea-China border regions. Various liquor products are available in the border areas because North Korea exports them through China. North Korean Trash items that washed on to the South Korean beaches included 1- to 1.5-liter PET bottles of draft beer and dark beer as well as soju bottles. We couldn’t discover any bottle of traditional Korean rice wine makgeolli but we did find the label attached on a makgeolli bottle.

We found a North Korean soju brand called “Snowflake.” The phrase “soft, mild soju at 21 percent alcohol, filtered through oak tree charcoal” is shown on the cover of the product manufactured by the Jonjin Soju Factory. Just like many people in South Korea, North Koreans seem to enjoy soju with a mild flavor.

North Korea’s healthcare system is known to be in a precarious state due to economic difficulties. According to North Korean defectors, it is difficult to receive proper treatment or get prescriptions at hospitals in the North, with locals suffering from lack of medical supplies for a long time. Packing materials of North Korean medicines found on the South Korean beaches show that the medicines were mostly made from natural substances based on traditional Koryo medicine.

Packs of North Korean medicines we collected include those of parasiticides and digestive pills. Their substances were mostly extracted from indigenous medicinal herbs. A digestive pill, for instance, uses tangerine peel extract and the extract of Saussurea lappa roots.

Professor Kang also found a large amount of packaging materials for Ringer’s solution. Appropriate usage, storage, substances and warnings are written on the back of the cover. Many of them are glucose injections and saline solutions produced by the Chongsong Pharmaceutical Company in Pyongyang, where leader Kim Jong-un reportedly visited several times. On November 8, 2014, North Korea’s Rodong Sinmun newspaper quoted the leader as saying that all products from the factory meet the World Health Organization’s standards for pharmaceuticals production and quality management, and this is definitely something to be proud of. The production date printed on the materials used in drug packaging is between 2019 and 2020, indicating that the North Korean factory has produced and distributed medicines until recently.

Other than pharmaceutical packaging materials, wrappers or containers of a wide range of North Korean daily necessities washed up to the South Korean beaches. They include wet towels, cosmetics, shampoos, soap, toothpastes, toothbrushes, laundry detergents, dish detergents and ballpoint pens.

Soap products all list palm oil and fragrant material as main ingredients, with each product adding its own substances.

The Sinuiju Cosmetics Factory produces soap under the name of “Spring Scent.” In addition, various soap products have been released, including anionic soap, lemony soap and oak wood charcoal soap. A facial soap product using the brand of “Unhasu” claims that it cleanses well, eliminates waste from the skin surface and even promotes blood circulation.

It is hard to fully understand North Korean society by simply looking at product wrappers collected from trash that washed over to the beaches. Still, it is meaningful indeed to catch a glimpse of North Korean people’s lives and imagine the country’s economic situation through product packaging.

North Korea’s packaging materials show that the country’s economic prospects are not so bright.

North Korean trash represents a cross section of its society, as it was actually used by local residents. The North Korean economy has been kept afloat based on its trade with China. North Korea was able to secure raw materials, food and fertilizer through trade with its communist ally. Unfortunately, North Korea’s border with China has been blocked for years due to the COVID-19 pandemic. Worse yet, North Korea has long been under harsh international sanctions. North Korea finds it hard to import goods from China and bring in raw materials from outside, leading to rising commodity prices. In this situation, the country has no other option but to produce things locally. If the border closure is drawn out further, the North Korean economy will likely suffer a serious blow.

North Korean daily necessities have become more diverse than before. Taking a close look at their packaging, however, one can find the country’s structural limitations. Also, it is questionable if the products are easily accessible to all North Korean citizens.

North Korea places so much emphasis on the improvement of public livelihoods. For that purpose, it seems essential to find a structural solution to break away from the current economic situation.