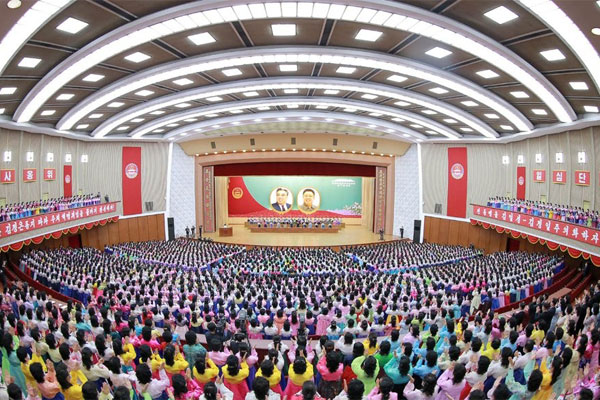 In North Korea, the Socialist Women’s Union of Korea is the country’s largest women’s group, while the Socialist Patriotic Youth League represents young men including students and soldiers. These days, North Koreans commonly say that the women’s union is running, the party is sitting down and the youth league is standing. What does it mean?

Amid the serious economic crisis in the 1990s, North Korea’s state rationing system collapsed, forcing locals to earn a living by trading goods at the unofficial market or jangmadang. In the process, the women’s organization led market activities to solve the problem of basic livelihood and even take care of the socially weak. The youth league, on the other hand, did not play any pronounced role. The expression, “the women’s union is running, while the men’s league is standing,” indicates that women are taking the lead in managing the livelihoods of the people.

So, the expression offers a good illustration of women’s role in North Korean society. Today, we’ll talk about North Korean women who are eager to embrace change, with Park Young-ja, researcher at the Korea Institute for National Unification.

North Korea aired a television series entitled Home in 2001. It is based on writer Paek Nam-nyong’s 1988 novel Friend, which was selected as one of the best world literature of 2020 by the American library magazine, “Library Journal.” The story revolves around a lathe worker Seok-chun and his wife Sun-hee, an art group singer.

The two fell in love and got married. But after constant quarreling due to personality conflicts, the wife files a petition for divorce.

The series dealing with the grave theme of divorce sparked controversy in North Korean society, and the broadcaster decided not to air the final episode of the show. The novel Friend implies that the man and wife may reconcile with each other in the end, after listening to the advice of people around them.

North Korea abolished divorce by mutual consent in 1956 and allowed married couples to seek trial-based divorce only. Before the 2000s, it was very rare for couples to seek a divorce, which was perceived with a negative view in North Korean society.

In male-dominated North Korean society, many husbands would ease their stress by drinking a lot, with domestic violence occurring frequently. In the North, it is not easy to get a divorce because husbands and wives can only divorce by a court judgment. Until the 1990s, it was even difficult to consider a divorce. Courts would grant divorces only when there were political reasons, like when the family of the spouse turned out to be a traitor. But that was mostly the case with the ruling elite. For couples who belong to the low class, it was simply unthinkable to go their separate ways.

But these days, the number of divorces in North Korea has been on the rise, with family dissolution from divorces emerging as a social problem. According to U.S.-based media Radio Free Asia, more and more North Koreans are seeking divorces, prompting local courts to limit the number of divorce trials each day, while the authorities are strengthening ideological education to prevent divorce. The sharp rise in the number of divorces is largely attributed to women seeking change. And this change was initiated by the jangmadang.

The breakdown of the rationing system in North Korea caused many citizens to starve to death and made families fall apart. In the miserable situation, many women jumped into the jangmadang economy to survive on their own. As they traveled farther and farther for market activities, especially engaging in border trade with China, they realized that ethnic Koreans in China did not really live like them. The women had greater economic power than before and earned enough money to give pocket money to their husbands. As a result, from the early 2000s, they no longer endured the mistreatment from their husbands who took drugs, used violence or had affairs. More and more women filed a petition for divorce with local courts, and judges approved divorces in many cases involving domestic violence and extramarital affairs.

North Koreans jokingly say, “If you throw a stone at the jangmadang, it will hit a woman every time.” This means women comprise a major axis of the jangmadang economy. While trading goods at the marketplace, women became keen observers of what’s going on in the outside world. They expanded their business network and turned themselves into a decision-maker. It is assumed that women make up a considerable portion of the North Korean new rich, known as donju. It is even said that it is women who feed North Korea and keep the local economy going.

Around 2010, women’s power enhanced significantly in North Korea. Women in their late 40s, 50s and early 60s who experienced the painful Arduous March period have expressed their desire, directly and indirectly, that their children will not live like them. After 2010, North Koreans in the jangmadang have commonly said that a husband is a pain in the neck, a son is an appendix, and a daughter is a heart. It means that the presence of the husband makes the wife uncomfortable, and the mother can live without the son, just as she can live even after her appendix is removed. But the daughter is indispensable, like a heart, as one cannot survive without a heart. Today, mothers and daughters, or women, are breadwinners in North Korea, with women’s power increasing in society.

Women have often appeared in North Korean media in recent years. In the past, North Korea used to stress that women should sacrifice themselves for their family and show loyalty to the state. In a shift from the traditional perception about women, however, local media have often reported about talented girls and highlighted women who have progressive spirit and keep challenging themselves.

For instance, a media agency introduced the country’s fourth female bulldozer operator, who studied at a technical school and received the Kim Il-sung Youth Honor Prize, which is considered the top honor given to young people. The media emphasized her persistent efforts.

A local media outlet also produced a documentary about a female plasterer who contributed greatly to the construction of the country’s major buildings such as the Moranbong Theater and Pyongyang Industrial College, which is now known as Kim Chaek University of Technology.

The media also brought to light a female worker dubbed “tractor granny” who worked at a tractor factory throughout her life.

As a signatory to the Convention on the Elimination of Discrimination against Women, North Korea claims that the country loves people, especially women and children. Women’s rights are often cited as a standard to determine how advanced a country is. Having this in mind, North Korea stresses that women in the country engage in brisk activities.

Currently, North Korea has a policy for mothers, rather than a policy for women, because the country believes it has already achieved gender equality. North Korea actually enacted a gender equality law as early as in 1946, a year after Korea’s liberation from Japanese colonial rule. The North claims that its women were successfully liberated a long time ago, saying that men and women are already equal. It has publicized quite often that women’s power in the country has considerably enhanced.

It is worth mentioning that women have risen to the political forefront in the Kim Jong-un era. The leader’s wife Ri Sol-ju, unlike her predecessors, has drawn public attention by performing the role of the first lady. Meanwhile, the leader’s younger sister Kim Yo-jong distinguished herself in various political events after visiting South Korea’s presidential office on the occasion of the 2018 PyeongChang Winter Olympics as Kim Jong-un’s special envoy. She was able to solidify her position as a leading voice on inter-Korean ties and U.S.-North Korea relations. Hyon Song-wol, who led the Samjiyon Orchestra’s trip to South Korea to celebrate the PyeongChang Olympics, has strengthened her presence in North Korea by preparing the official protocol for the leader in important events. And there is Choe Son-hui, a career diplomat who attended preparatory working-level talks for the 2019 North Korea-U.S. summit.

In 2020, North Korean media said that 350 women in the country had received a doctorate degree over the past ten years. The media revealed the names of the women and their areas of expertise in detail. They include Cho Su-kyong at Pyongyang University of Mechanical Engineering, who developed an automatic socks-packing machine, and weather forecaster Shim Myong-ok who has conducted weather research for over 40 years at the State Hydro-Meteorological Administration.

While 350 women earned a Ph.D. degree over the span of ten years, North Korea produced a similar number of the same degree holders in 2019 alone. Compared to the past, more and more North Korean women carry out social activities and have professional jobs, but the proportion of those women is still limited.

North Korea has become more conservative since its second summit with the U.S. ended without an agreement in Hanoi in February 2019. The nation has since advocated self-reliance, collectivism and totalitarianism. As a result, homes have become conservative again. Moreover, international sanctions on North Korea and the pandemic-induced border shutdown have restricted women’s market activities. State policies have been focused more on national security, making North Korean society male-centered.

As far as women’s liberation is concerned, most women in North Korea take it for granted, as they were taught that regime founder Kim Il-sung had liberated women. But since the 2000s, they have pursued liberation in their own way. Their quest for genuine liberation may take a long time. In the grueling process, some women are expected to make their presence felt.

Marking International Women’s Day on March 8 this year, North Korea’s official Rodong Sinmun newspaper asked women to be always aware of their responsibility as a housewife, daughter-in-law, wife and mother. The paper urged them to play their desired role in serving their parents-in-law well and do everything they can to help their husbands and children perform their duty in a good way for their country. It sounds like the paper, still yet, only underlines women’s obligation and responsibility.