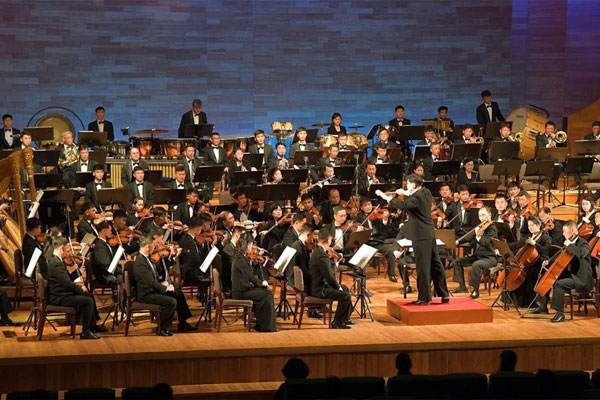 A documentary film entitled K-Classics Generation was released in South Korea on August 31. It was created by music director Thierry Loreau, who has been broadcasting the highly prestigious Queen Elisabeth International Music Competition for over 20 years, working directly from the scene. In fact, the director produced a similar documentary, The Korean Musical Mystery, even earlier in 2012, as he wondered why so many Korean musicians dominate international competitions. He noted that Koreans have taken first prizes at major international music contests for the last two decades. As one of the secrets behind the success, he said young Korean musicians freely express the stories within them in their own unique ways.

The global popularity of Korean classical music is well evidenced in the expression, “K-classics,” which is apparently inspired by the well-known term “K-pop.”

Many Koreans may still remember the joint concert held by philharmonic orchestras of South and North Korea in Seoul in 2000. At the time, world-renowned South Korean soprano Sumi Jo and North Korean tenor Ri Yong-wook sang passionately together to draw so much attention.

It is said classical music in North Korea is a little different from South Korea’s.

A North Korean defector who watched the performance at the time still cherishes the impressive moment.

I was surprised to see a world-famous South Korean violinist perform and other South Korean vocalists sing. I experienced vocal music of another country for the first time in my life.

North Korea’s State Symphony Orchestra also performed with the New York Philharmonic in Pyongyang in 2008 for a historic peacemaking concert. In the North, the state symphony orchestra is defined as the republic’s representative art creation group that plays an important role in developing juche orchestral music as well as musical art. Juche means self-reliance. On top of this orchestra, there are several other classical music performance groups in the country.

In North Korea, the Mansudae Art Troupe was set up in 1969 and the Isang Yun Orchestra was established in 1990. Named after the renowned Korean-German composer, the Isang Yun orchestra was hailed by young performers because the Western-style chamber orchestra frequently showcased Western classical music, which was rarely performed in the North. Its repertoire consisted mainly of Yun’s works and music performed in Western and Central Europe.

Meanwhile, the Samjiyon Band was created from the Mansudae Art Troupe’s women’s instrumental ensemble. The band competed with the Unhasu Orchestra, which is familiar to South Koreans. The Chongbong(청봉) Band was created as a light music choir and orchestra. The Samjiyon Orchestra was registered as an official orchestra in 2018, when it visited South Korea on the occasion of the PyeongChang Winter Olympics. Currently, the Band of the State Affairs Commission is the most popular band in the country. These music groups all perform classical music pieces.

North Korean founder Kim Il-sung once said that art is a strong means of leading the public to revolutionary struggle. In the communist regime, all forms of art are used as a tool for propaganda and agitation. Classical music is no exception. When performing classical music, North Korean musicians use modified traditional musical instruments alongside Western ones in the so-called “combined orchestra.”

North Korea began to stage its unique art genre called revolutionary opera in the late 1960s. At first, western musical instruments were used for the shows. But former leader Kim Jong-il raised the need to use Korean traditional instruments to express feelings unique to Koreans. Afterwards, Korean instruments were included in revolutionary opera. Local audiences made a positive response to the new style, and North Korea believed it would be its independent orchestral music. As a result, North Korea reformed traditional instruments in a way to produce sounds that match Western music and included them in the “combined orchestra.”

Most music pieces performed by North Korean orchestras are not traditional Western classical music. Rather, they were created by the country on its own. Under Kim Jong-il’s instruction in the 1970s, North Korea produced new orchestral music pieces, based on local songs.

North Korean classical music is mostly inspired by so-called “juche” music. The country found that typical classical music would not appeal greatly to the general public so it was not good enough to instill revolutionary spirit in the people.

To find a solution, North Korea decided to arrange famous songs for instrumental pieces. The first such orchestral music is called “Rich Harvest Comes to the Chongsan Plain.”

Korean traditional musical instruments such as a small gong and a wind instrument were added to create cheerful music. While listening to the music, audiences are reminded of the songs they already know, even recalling the lyrics, although it is instrumental music. North Korean instrumental music based on popular local songs includes “Orchestral Arirang,” which is well known among South Koreans.

Orchestral Arirang was a great music piece that was created in the 1970s. The New York Philharmonic performed the Korean traditional folk song Arirang in Pyongyang. Arirang was played by North Korea’s Unhasu Orchestra during a concert in Paris, under the baton of South Korean conductor Chung Myung-whun(정명훈). It was also performed at the joint concert by South Korea’s KBS Symphony Orchestra and the North’s State Symphony Orchestra in the early 2000s. North Korea’s classical music is characterized by the arrangement of “juche music” for instrumental pieces.

It is said North Korea’s classical musicians are highly accomplished in terms of techniques. That is because the country has found and trained the musically talented at the state level. North Korea began to educate artists in earnest in 1959 when the Supreme People’s Assembly decided to overhaul the education system overall. The country introduced an eleven-year art school system and provided childhood music education to talented children.

South Korean pianist Lim Yun-chan is said to have started learning music in a private institute in his neighborhood. In North Korea, in contrast, private education is not practiced, at least in principle, and students learn through public education in most cases. One of the major duties of kindergarten teachers in the North is to find gifted children. If a teacher finds that a kid is good at playing the drum or piano, the teacher sends a recommendation to a local committee. The committee determines whether the kid is really talented and sends him or her to kindergartens specializing in art education. Later, the child is admitted to elementary school, junior high school and then college of art. This is how the education system for gifted students works in North Korea.

In the North, the Kyongsang, Changgwang and Taedongmun kindergartens are famous for early education for musically talented children. In particular, the Kyongsang kindergarten located in the heart of Pyongyang is known as an institute attended by Ri Sol-ju, the wife of leader Kim Jong-un. These kindergartens are equipped with dozens of different kinds of musical instruments as well as high-quality sound systems and practice rooms, with several music teachers stationed.

North Korea’s childhood education for the gifted has resulted in outstanding performances at international competitions. Piano prodigy Yu Pyol-mi won the first prize at the Schumann International Juvenile Piano Concours in 2010 at the tender age of eight, while Ma Shin-a won the top prize at the 2016 International Fryderyk Chopin Piano Competition for Children and Youth. Both are Kyongsang kindergarten graduates.

Graduates of those specialized kindergartens enter major art schools such as Pyongyang Music Academy, Kumsong Academy of Music and the Kim Won-gyun Conservatory. Some are fortunate enough to be given an opportunity to study abroad. After graduation, they work with major art groups like the State Symphony Orchestra and the Mansudae Art Troupe to make a stable career.

North Korean parents make constant efforts to put their children in the education system for the gifted. In most cases, the parents of those who are nurtured as gifted students are musicians, belong to the upper class or have wealth. People of the high social class have greater educational and economic advantages, which they pass on to their children. Successful North Korean women like Ri Sol-ju and Hyon Song-wol were initially musicians. They had a good family background and learned music in an ideal environment. Both Ri and Hyon attended Kumsong Academy of Music. Hyon was a vocalist at Pochonbo Electronic Ensemble before becoming a high-ranking official, while Ri, the wife of the leader, was a member of the Unhasu Orchestra.

Why does North Korea constantly explore children with artistic talent? Analysts say the country uses artists as a tool for regime propaganda. Children who received early music education are actually taught to praise the family of the top leader and the authorities. Among talented North Korean musicians who cut a conspicuous figure in childhood, however, not many appear on the global stage later.

North Korea sends many students abroad to let them learn advanced foreign techniques, with the purpose of developing its own “juche art.” But once they win prizes at international competitions, they return home and disappear from the international stage. For example, accomplished violinist Mun Kyong-jin, the former member of the Unhasu Orchestra, took second place at the International Tchaikovsky Competition, where no first prize was awarded. But the top-notch violinist only performed inside North Korea.

When studying or joining competitions abroad, North Korean musicians probably believe that their mission is to serve their country as a pioneer to develop juche art, rather than earn money and win fame internationally. The North Korean government also urges them to come back home, since their global activities might prove dangerous for the regime. That’s why there are few, if any, North Korean musicians who perform on the global stage.

It’s a shame that talented North Korean musicians cannot showcase their abilities properly, although they received rigorous training and went through fierce competition from childhood and their abilities have been recognized internationally. We’re looking forward to enjoying their performances on the global stage.