Art Squads for Propaganda and Agitation in N. Korea 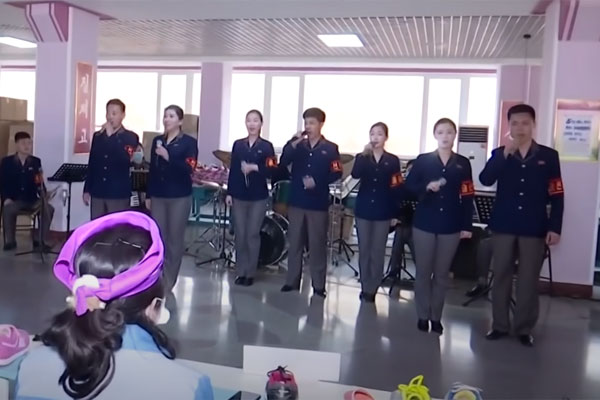 In June, North Korea’s state-run Korean Central News Agency reported the contest of art groups for propaganda and agitation at a construction site, where ten-thousand homes were being built in the Hwasong area in Pyongyang. In August, the country’s official Rodong Sinmun newspaper introduced the mobile art group for agitation of a local mine. Early this month, the paper covered the story of a number of art groups engaging in propaganda and agitation activities at local farms. North Korea has steadily released reports about such activities, which appear to be conducted briskly.

As culture and art organizations unique to North Korea, art squads for propaganda and agitation stage performances at factories, enterprises, farms or military units to deliver political messages and incite workers to carry out economic activities aggressively. The concept might be rather unfamiliar to South Koreans.

This is part of an art propaganda squad’s performance at a local shoe factory. Before the show begins, the group says the purpose of the show is to encourage the laborers there to work harder. Its presentations, ranging from singing and dancing to gags, put top priority on conveying the authorities’ political message, such as self-reliance.

The short performance, which lasted about 20 to 30 minutes, drew an enthusiastic response from the audience.

It was really amazing. All workers, including myself, were fully determined to accomplish today’s goal.

This powerful and inspiring show further strengthened my resolution to try my best to carry out economic plans in the first year of the new five-year economic strategy.

North Korea constantly educates the people with the purpose of instilling socialism into their minds. In this respect, propaganda and agitation is very important. Among the 22 organizations under the ruling Workers’ Party, the Organization and Guidance Department is the most powerful, followed by the Propaganda and Agitation Department, which plays a key role in ideological refinement for the public. Former leader Kim Jong-il started his political career at this department, and current leader Kim Jong-un’s sister Kim Yo-jong works at the same department.

It is important that major art troupes in the central region present shows. But if smaller art groups incite people at the level of the most elementary unit, which is described as “cell” in North Korea, it will be highly effective. Therefore, art propaganda squads and mobile art groups for agitation have great political significance.

The history of North Korea’s art propaganda groups date back to 1927, when a group called “entertainment propaganda squad” was created. North Korean founder Kim Il-sung urged cultural workers to become fighters in the cultural forefront during his speech in 1946. From the following year, the North began to organize art troupes and mobile art groups in the central region, local provinces and social organizations. In 1973, each province established its own art propaganda squad, which gradually took root as the country’s important means of propaganda and agitation.

Art propaganda squads are not professional troupes but semi-art groups. They tour around various places including factories, enterprises, collective farms, mines and construction sites across the nation. They motivate laborers there to work harder through singing, dancing, musical instrument playing, witty gags and simple theatrical performance. The shows are often interrupted by explanations of party policies.

Along with art propaganda squads, mobile art groups for agitation are in charge of similar activities. North Korean media have praised members of these groups for rushing to deep underground mines, farms and fishing grounds, carrying their backpacks, even during the Arduous March period in the 1990s to vigorously stage the so-called “frontline” activities related to political propaganda and economic agitation.

Mobile art groups for agitation quickly explain party policies to party members and workers in each period and actively promote the party’s economic policies at production sites. They are otherwise called “militant art groups,” due to their swift and energetic activities.

North Korea felt the need to create small agitation groups to reach the most basic units, or cells, of factories, enterprises and collective farms, in order to deliver party policies. That’s why those mobile art agitation groups were organized. Such groups consisting of war veterans were set up first, followed by students’ groups and women’s groups.

If a new song created and released by a central music band draws a positive response, the song is broadcast on TV and its sheet music spreads to “cells.” In front of the cell members, agitation groups sing the song in harmony to the accompaniment of simple musical instruments such as the accordion, guitar or drum, to induce the audience to sing along.

North Korean media stress that the art groups engage in “frontline” propaganda and agitation activities. The word “frontline” here means that the groups rush to the production sites such as factories, enterprises and farms to carry out such activities on the spot. In fact, they never fail to appear at farms during the rice-planting season when the farms are short-handed and also at sites recovering from disasters like floods.

Members of top art troupes are also dispatched to some production sites occasionally.

The Mansudae Art Troupe, one of North Korea’s major music groups, was sent to the site where ten-thousand apartment units were under construction in Pyongyang under leader Kim Jong-un’s instruction. Actor Ri Kyong-hoon, who earned the honorable title of “Merited Actor,” was also present.

My heart overflows with joy and I cannot help but feel excited. I’ll definitely encourage our fellow construction workers today, and I’ll come here again tomorrow, the day after tomorrow, until the work is done.

On important political or economic occasions, major music bands stage performances at certain sites to demonstrate to people there that the party pays close attention to them. Disasters such as floods tend to deteriorate public sentiment. The party aims to quell growing public unrest by letting major art troupes perform.

Famous music groups have traditionally been dispatched to particular sites since the 1950s. The country believed that the art groups could not create songs or other music pieces that appeal to the public if they only stay inside Pyongyang, far away from local residents, and do not know what their lives are really like. So, the art troupes are instructed to visit local sites for “field experience” and figure out what people really want. For these two purposes, major art troupes in the central region have performed in local areas on some occasions.

The band was often seen at sites where the leader provided on-the-spot guidance to workers or soldiers. For example, the band performed at a military unit on the eastern front, at a tractor factory in Jagang Province and in Samjiyon County. North Korea was building houses in the county to establish a special tourist zone near Mt. Baekdu. The Moranbong band was sent to the construction site to encourage workers there.

North Korea held its first lecture session for propaganda workers in March. At the time, the authorities said the purpose of the workshop was to “innovate” the party’s ideology project.

Leader Kim Jong-un urged the participants to eliminate the red tape and innovate the party’s ideology project in a comprehensive way. He reportedly instructed them to find new methods of propaganda and agitation in each sector, including film, broadcasting and newspaper. But North Korean art squads for propaganda and agitation still continue with their traditional activities. Professor Bae explains why.

The biggest reason is that the squads perform on the very spot to directly reach the local audience. This is the most important element of performing arts. You can enjoy a singer’s performance on the radio or YouTube. But if you actually see the performance at a live concert, it will be much more moving. Likewise, if the art squads breathe with the audience in the same place while performing, the sound of cheering together is heard in real-time, adding to the sense of presence. The workers on the scene will be able to better understand party policies and feel motivated to fulfill their goals quickly. These days, new forms of media have developed remarkably. But they would be meaningless if North Korean residents choose not to use them. In contrast, they have to watch the performance of art squads for propaganda and agitation, whether they like it or not. For that reason, I think the art squads will continue to perform their role in the North, regardless of the development of new media.