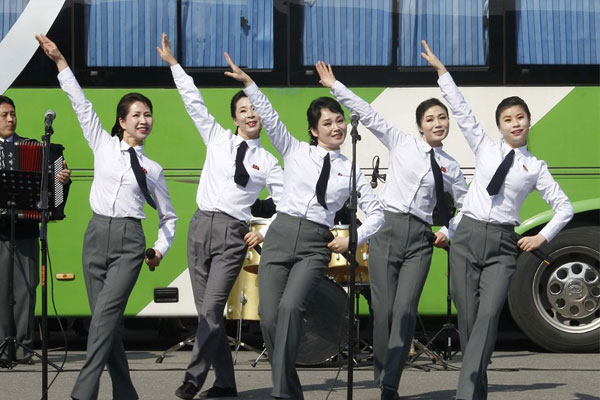 The South Korean broadcasting scene has been swept by a number of singing contest programs over the last ten years. The programs showed typical song contests at first, but later included contests dedicated solely to rap and trot music as well as competitions for idol trainees. The contests have been diversified in terms of genres and contenders, even adding some professionalism. The shows make both the contestants and viewers nervous, as you may expect.

North Korea held the people’s art contest in April last year on the occasion of the birthday anniversary of regime founder Kim Il-sung, although quarantine measures were still in place due to the COVID-19 pandemic. The event was attended by art workers from local enterprises and collective farms, who had passed the preliminary rounds in each city, county and province over the past month.

Apart from the art contest, it is said that there are various other competition programs in North Korea.

In North Korea, there are many contests in the form of an audition, including the people’s art contest, the art competition for families of soldiers, the folk music contest, the national singing competition of workers and the contest for mobile art groups for agitation. North Korea holds a variety of contests as part of mass culture projects, which enlist the participation of the general public, for the purpose of providing ideological education and delivering the party policies to the people.

Contest programs are highly effective, compared to other culture projects, when invested resources are taken into consideration. Through those programs, North Korea indirectly implies that everyone has an opportunity to achieve social success. The programs are used as a political means to let citizens enjoy culture and spread it voluntarily.

One of the most famous contests in North Korea is the national singing competition of workers.

This singing contest started in earnest in 1986 under the instruction of former leader Kim Jong-il. Anyone can participate in the competition, which has the purpose of helping workers, not professional artists, improve their singing ability.

The singing competition is aired by the state-run Korean Central Television. Anyone can take part in the event. The TV station edits the live recording of the show to appeal to viewers. The program is mostly aired during prime time from 8 p.m. to 10 p.m. According to North Korean defectors, so many people are eager to participate in the program and viewer ratings for the show are pretty high. In 2016, the Korea Central Television broadcast a special three-part program to commemorate the 30th anniversary of the singing contest.

The singing competition enjoyed great popularity from the beginning. During the inaugural event, contest judges were stunned by its explosive popularity. A judge recalls the moment.

The competition venue was so crowded that some of the judges went out to see what was going on. Applicants scrambled to enter the building, pulling and pushing each other, and almost broke the gate.

The first edition of the competition in 1986 was joined by some 560 people, with 70 preliminary rounds, the semifinals and the finals taking place. About 500 people participated in the second event consisting of 80 rounds. Contestants competed in the male solo and female solo sections at the first contest, while the second event added male duets, female duets and mixed duets between male and female singers. From the third contest, organizers changed the format of the event to attract many more participants.

From the third event, the contest expanded categories for performers: workers, farmers, families, housewives, middle school students and college students. Participants in each category could compete in solo and duet sections. Currently, the contest is open for six different categories: laborers, farmers, office workers, college students, housewives and families. The contest is held over the span of two years, with competitions taking place in three categories each year.

Participants are supposed to pass regional preliminaries before reaching the semifinals and the finals. The entire process is recorded live on the spot, and the Korean Central Television airs the semifinals and the finals. For preliminaries alone, it takes as long as five to six months. During the period, North Korea encourages the people to voluntarily join the nationwide singing festival.

Participants from various fields, including a worker from a machine shop at a local coal mine and a server at a noodle restaurant, introduce themselves and have a brief interview with the host of the show before singing.

South Korean audition programs evaluate the participant’s individual abilities. In North Korean singing contests, on the other hand, contenders’ ideology is considered important. Clearly, singing competitions are cultural events where people from all walks of life are encouraged to join. Nevertheless, the contests are not really for the general public but are simply based on public participation.

The national singing competition of workers has a total of five judges, who formerly worked as professors at music schools or performers. On top of singing abilities, the judges take other elements into consideration when evaluating the participants.

The judges assess how the contestants express ideology in an artistic way and whether they deliver lyrics and melodies precisely, rather than how excellent their singing skills are. If a participant sings the song with wrong lyrics, even though they are only slightly wrong, he or she will be eliminated. If a participant sings while playing a musical instrument skillfully, he or she will be given extra points. Former leader Kim Jong-il instructed event organizers to reduce the gap in scores of participants so the participants will not be disappointed. As a result, winners tend to win only by a small margin. Therefore, extra points have a great influence on the final result.

In North Korea, ordinary citizens have very few, if any, opportunities to appear in broadcast programs. It is easy to imagine that competitors in the singing contest feel very proud. For the sole purpose of winning first place in the competition, many people are willing to have a second and even third try. College students, in particular, compete fiercely because it is a matter of the honor of their school.

The team from the Kim Chol Ju University of Education has won the competition several times.

The Korean Central Television even produced a special program about this education university. The intense competition is understandable, because final winners in each category are given special opportunities.

Some of the winners, in many cases, are selected as performers of professional art troupes. Others might have opportunities to enter art squads for propaganda and agitation. It is said that it is difficult for North Korean people to choose their jobs or switch jobs of their own free will. It is little wonder people show great interest in the opportunities to become artists, who receive far better treatment than general workers.

North Korean authorities have a clear purpose of hosting contest programs. Current leader Kim Jong-un once urged the people to popularize art on a higher stage by vigorously carrying out activities related to mass culture and art and to let songs of revolution powerfully resonate throughout every battlefield where socialism is being built.

After all, the purpose of the national singing competition of workers is to promote propaganda and agitation.

In the North, songs are considered one of the means of overcoming difficulties. Singing contest programs, based on people’s voluntary participation, are used as a method of spreading communist ideology and party policies among the public. In this context, the official Rodong Sinmun newspaper says that singing competitions serve as a great format and powerful means of developing mass culture and art. Through the programs like the national singing competition of workers, North Korea built a system of using songs as a political means in the most effective and efficient way.

In 2003, KBS TV’s singing program, “National Singing Contest,” was recorded at the Moranbong Park in Pyongyang. The program shows ordinary citizens competing in singing and dancing after passing preliminaries. The popular show that was shot in the North Korean capital later aired both in South and North Korea, drawing enthusiastic response from viewers.

At present, cross-border inter-Korean relations are just so complicated, with their prospects remaining murky. Still, we hope that South and North Korea will plan and air a music program joined by the two sides, like KBS’ singing show in Pyongyang.