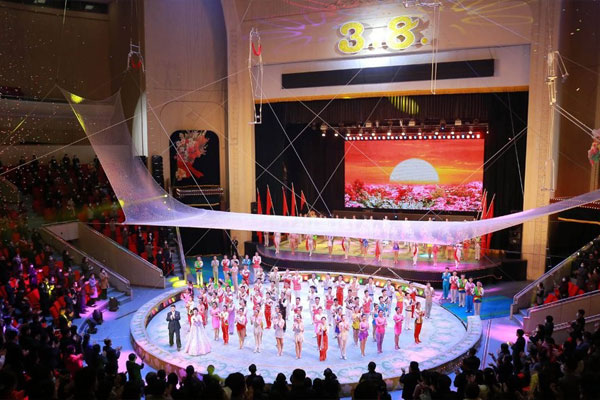 In North Korea, acrobatics or the circus is called “kyoye,” which literally means technical art or performing art. Today, we’ll learn about North Korea’s kyoye from Kim Seung, adjunct professor of the Department of Digital Culture and Contents at Konkuk University.

The film was screed at the Toronto International Film Festival in 2012.

In the film, actress Han Jong-sim(한정심) performed the role of the heroine, Young-mi(영미), while actor Pak Chung-guk(박충국) starred as the male lead, Jang-phil(장필). The performers were actually the members of kyoye troupes, so they were able to display difficult acrobatic skills in the film. North Korea co-produced the film with Belgium and the U.K. and showed it at the Toronto International Film Festival to demonstrate its high level of acrobatic feats worldwide.

North Korea explains that kyoye reflects experiences, emotions and tendencies of people through technical skills of physical movements and plays its role in bringing cultural refinement to society. In the North, kyoye is recognized as an art form, just like literature, movies, theatrical performances, fine art and music.

Kyoye is an entertainment form for the public and an art genre unique to North Korea. The North defines circuses in capitalistic countries as something old and claims that it has explored its own, new art genre. The country finds the origin of kyoye in mural paintings in tombs of the ancient Korean kingdom of Goguryeo. A North Korean magazine Joseon Art argues that kyoye originated from the murals that depict people riding horses for physical training. The murals in Palcheong-ri(팔정리) Tomb, for example, show two men blowing a horn while riding their horse, not holding the reins of the horse. North Korean kyoye acts for horse-riding and dance on a moving horse are believed to be modeled after the equestrian acrobatics portrayed in the ancient tomb murals.

North Korea’s kyoye or circus shows started with the establishment of the National Circus in 1952 in the middle of the Korean War. Its name later changed to the Pyongyang Circus.

The circus troupe holds regular shows at its own theater located along the Taedong River in Pyongyang. The theater can seat 35-hundred spectators. The Pyongyang Circus presented a performance in Seoul in 2000 to create a favorable mood between South and North Korea in the run-up to the historic first inter-Korean summit that year.

Another group representing North Korean circus is the Korean People’s Army Circus. It presents regular shows at its own theater, which is also known as the Moranbong Circus Theater, with a seating capacity of 18-hundred.

Kyoye includes acrobatics, magic shows, animal acts and short comic acts usually shown while stage settings are changed. Acrobatics, among others, is the most representative form of kyoye.

In North Korea, acrobatics is considered an artistic combination of athletic movement and skills with rhythm. North Korean aerial stunts are particularly famous. They include a flying act that incorporates a traditional folk game into aerial acrobatics. The Pyongyang Circus combined aerial flight with the trapeze to create “Trapeze Flight” in 1979. With this circus work, North Korea won the top prize at an international circus festival in 1980. Another North Korean circus work “Flying Girls” is well known on the international stage. In this work, trapeze artists perform stunning tricks in mid air. Those works are rooted in Korean folk games.

North Korean circus performances also use trained animals for stunts. Bears are seen skipping rope, while dolphin shows are also popular. In fact, shows like that have disappeared in many parts of the world, as they were criticized for animal abuse. But in North Korea, circuses that use animals are still popular, and related programs have often aired on local TV until recently. Meanwhile, magic shows comprise another distinctive part of kyoye.

By turning something unrealistic into realistic and something impossible into possible, North Korean magic shows are meant to arouse people’s interest and curiosity and therefore contribute to developing their imagination, reasoning power and inquiry skills. In a magic show, an actress enters an empty box and the box is closed. The box is stabbed in every direction with twelve swords. When the box is open, not only the actress but two more actresses emerge from the box. In another performance titled “Fire Marvel,” a piece of cloth inside a glass tube turns into a person, who is put inside a paper box. The box is burned and then three people come out of the box.

North Korea held a large-scale magic show at Pyongyang’s May Day Stadium in 2011. The performance showed amazing magic tricks, like a passenger bus, an elephant, a horse and a helicopter suddenly disappearing before reappearing on the stage. It seems North Korea is expanding magic shows in scale to provide the people with something more spectacular to see.

It is believed that North Korean circus has been able to maintain its world-class level, thanks to its systematic education at specialized institutions including the Pyongyang Circus School.

The institute specializing in kyoye training had been run under the present-day Pyongyang Circus until it was officially established as Pyongyang Circus School in 1972. It offered a three-year course at first, but it has now expanded to a six-year school. There is fierce competition to enter the school and students have to undergo rigorous training. After graduation, they join professional circus groups to perform as kyoye artists. The groups are notorious for strict selection criteria.

To enter Pyongyang Circus School, applicants have to receive intense training from childhood and survive the fierce competition. Even after becoming kyoye artists, they still receive hard training, such as six hours of technical training and one hour of training for a particular circus work each day. And they also have to perform in circus shows.

But the hard work is worth enduring, as they can receive a large reward. They can rise up from the sixth grade to the first. Moving beyond the first grade, they could earn the honorable title of “People’s Artist.”

A female kyoye artist named Choi Kyung-hwa(최경화) was the daughter of an ordinary laborer. She entered the Pyongyang Circus School and joined the Pyongyang Circus. After a long, tough training, she succeeded in performing a quadruple backflip, which is an extremely difficult skill. Choi became the winner of a Golden Clown award at the Monte-Carlo Circus Festival in 2002. In recognition of her achievement, she was given the title of “Merited Artist” in 2005. At the Wuqiao International Acrobatic Festival in China in 2007, she successfully executed the same skill to win a gold lion prize. She is a legendary figure, indeed.

Kyoye has fewer ideological elements, compared to other art genres. For that reason, North Korea actively uses circus shows as a tour program. The shows have become a must-see program for foreign tourists visiting North Korea, apparently contributing to earning foreign currency. Still, kyoye is not entirely free from propaganda and agitation.

North Korean media repeatedly stress that kyoye is North Korea’s own, independent art. During a dazzling aerial stunt performance against the background of a construction site, North Korea unfolds a banner indicating the slogan of the Kim Jong-un regime’s mass mobilization campaign known as the “Mallima Movement.” In a circus show titled “The Universe Calls,” a performer clad in a spacesuit is seen flying through space, like a missile. Analysts say that every attire and movement of kyoye artists shows the regime’s persistent commitment to nuclear and missile development.

North Korean circus troupes interact with the outside world more actively than any other performing arts groups in the country. That is because the circus involves the use of the human body and equipment and it does not reveal ideological elements very much, making it suitable to be enjoyed by audiences in other countries. North Korea has created new circus shows for foreign travelers visiting Pyongyang. Apparently, the country perceives this particular art genre as an industry.

However, kyoye is still subject to the socialist theory of creating culture and art. By providing athletic and cultural education to the people, kyoye could instill an undaunted fighting spirit for revolution and revolutionary optimism into the public. In this sense, I’d say kyoye still plays a role as a cheering anthem for socialism in North Korea.

North Korean circus has developed considerably to reach a world-class level, on the back of full and complete support by the government. But it doesn’t seem easy to exclude political elements from it.