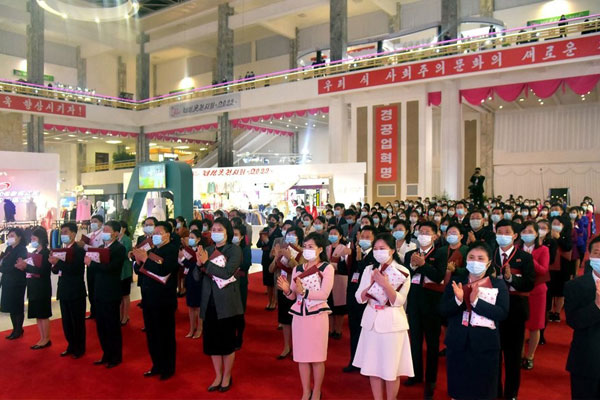 North Korea has traditionally stressed stereotyped images of women who sacrifice themselves for their family and show loyalty to their country. But things are changing, in line with brisk social activities of young women who were born in the 1990s and belong to the so-called jangmadang generation. Jangmadang refers to the private market. In a letter sent to the congress of the Socialist Women’s Union of Korea in 2021, leader Kim Jong-un emphasized that more and more women need to engage in social activities. Under the current leader’s rule, North Korean media have often reported women who are taking part in challenges in various fields that were once considered an exclusive arena for men.

Today, we’ll talk about North Korean women who are challenging taboos with Dr. Lee Ji-soon at the Korea Institute for National Unification.

In fact, North Korea enacted a law on equal rights for men and women pretty early.

In reality, however, North Korea remains patriarchal society and deep-rooted stereotypes regarding the roles of men and women are still prevalent. More and more women have supported their family as breadwinners since the Arduous March period in the 1990s, with the male-centered culture shaking. Even so, the state still regulates women’s appearance and attire within the framework of socialist beauty. Legal regulations concerning the protection of women from dangerous work actually restrict their freedom to choose an occupation.

Since Kim Jong-un took power, North Korean novels have portrayed women who work at production sites in light industries, including those who work in the spinning process of synthetic fibers, as well as women who have professional jobs such as scientists and researchers of defense science.

It had traditionally been taboo for North Korean women to have certain jobs, but some literary works describe women doing those jobs. One example is author Bae Kyung-hui’s novel titled First Step that was released by literary magazine “Joseon Literature” in 2017.

The story revolves around a girl named Eun-sook. Her parents are very proud that her grandfather, father and uncle all worked as truck drivers in reclaimed land. Now facing retirement, her father is sad that he has no son to inherit the family business.

The father says “A truck driver is not a job for a woman.” Upon hearing that, Eun-sook gives up her dream of becoming a driver. In the past, people in South Korea were also used to a similar social atmosphere. It seems North Korean women are still barred from certain professions.

North Korea’s Industrial Safety Act states that female laborers shall not do work that might cause harm to their health. The law does not prohibit women from driving itself. But drivers in North Korea are supposed to repair vehicles, when necessary, and driving vehicles has long been in a predominantly male realm. In the North, women are not allowed to have physically demanding jobs such as smelting and to deal with materials related to the heavy chemical industry, either. The law bans women from engaging in those works that are directly linked to their health.

Eun-sook decides not to become a driver due to the dissuasion of her family. One day, she happens to watch a TV program about a woman driver and she changes her mind. In spite of the opposition of her family, she chooses to become a driver rather than go to college. At first, she drives a five-ton truck. With the help of her father, she is able to fix a broken vehicle herself. Into the third year since she started working as a driver, she can drive a 25-ton truck all by herself. However, the reality is much harsher than she thought. She cries whenever her vehicle breaks down and whenever she gets a scolding. Too often, she finds herself hoping to escape.

Enduring all the difficulties, she eventually earns recognition as a driver.

In the novel, Eun-sook is scolded by an official in charge of material management so severely that she feels insulted. She complains of that in front of a secretary of the youth league. What the secretary says is the main theme of the novel. The secretary says, “You can drive a truck, even though you’re a woman, not because you are competent but because Chairman Kim Jong-un highly values young people. If you request better treatment, that means you will repay the dear leader only with ingratitude.” What the secretary is trying to say is that Eun-sook was able to realize her dream all thanks to the leader, so she should be grateful to the leader and fulfill her duty and responsibility to contribute to society. This is the key message of the story.

For example, a TV program introduces a 20-something woman named Kim Eun-sim as an experienced driver who travels on unpaved mountain roads, with her truck laden with heavy logs. By inserting an interview of her father, who only has four daughters, the program highlights that the young woman is as good as any other sons. Here’s the interview of Eun-sim’s father.

I have no son, but Eun-sim said she would carry on the family line by driving a truck.

Women introduced by the media generally show a similar pattern, that is, daughters taking over the family business in place of sons. It’s a shame that the stories are focused more on the need to replace sons, rather than on women’s own free will to challenge a certain field and their desire to achieve success.

Our dear leader was gracious enough to hold comrade Eun-sim’s calloused hands and highly praised that the ideology and spirit of young people are more precious than any jewel.

The process of challenging something, achieving success and feeling a sense of accomplishment could be described as women’s self-realization. But the remarkable success of women shown in North Korean novels and media is all attributed to the dear leader who thinks highly of young people. That is, individuals’ challenges and endeavors are replaced with, and praised as the leader’s achievement.

Apart from Kim Eun-sim, North Korean TV has recently shown many other women who have successfully entered areas that had previously been regarded as men’s arena. They include a bulldozer operator working at construction sites, a plasterer using machinery and a woman making tractors herself.

The success stories encourage women to move forward in society. The stories also have the purpose of using female labor. Working women mostly go to the jangmadang early in the morning to earn economic profits through market activities. North Korea finds it necessary to return their labor and capital to society. To use them for public interests and national development, the North needs to induce young women to engage in activities in public spaces such as construction sites, not in the private market. Also, the proportion of working women serves as an indicator of gender equality. That’s why North Korea actively encourages women to seek a social career.

Since Kim Jong-un came to power, North Korea has created an atmosphere that places emphasis on women’s professional competence and urges women to display their abilities through social activities.

For example, North Korea highlighted female fighter jet pilots. In 2014, local media reported that leader Kim Jong-un watched the flight training of the country’s first female fighter pilots, Jo Kum-hyang and Rim Sol. The media covered the story of the leader taking pictures of the two pilots himself and praising them.

The leader said that the young girls are really amazing, calling them the flowers of the sky. He also said they are the first-ever pilots of supersonic fighters in the history of the country’s armed forces.

It is quite challenging for women to become a fighter jet pilot in any country. There are not many female fighter pilots in the world, with many countries only having a handful of such pilots. Surprisingly, young women appeared as fighter pilots in North Korea. This is definitely something North Korea is proud of and wants to show off worldwide. North Korea demonstrated that it has elite female soldiers, just like advanced air forces in other countries, and boasted its defense capabilities.

Now we can see more and more North Korean women have challenged the fields that had traditionally been regarded as men’s realm, fulfilling their mission successfully. We’ll have to wait and see how these changes in North Korean women may influence the communist society overall.