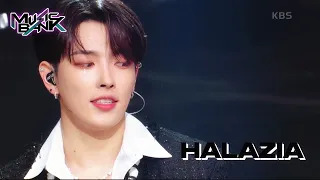 ATEEZ is back with their new release, “Spin Off: From the Witness.” The title track from the album is called “Halazia.” The new song is a mix of genres from electro-pop, dubstep, drum, bass, dancehall, and trap. Members Hongjoong and Mingi were said to have taken part in the lyrics of the track along with producers Eden, Ollounder and Maddox. The music video for the song follows a dark aura with a plot of its own. “Halazia” is yet another story of revolution.

The newest release is a follow-up of  ATEEZ’s string of plots revolving revolution. “Halazia” shows the eight members as anarchists. The new track is currently being praised for its originality and creativity, soaring to the #1 spot on the iTunes Top Songs charts in more than 28 different countries including Brazil, Indonesia, and Finland.