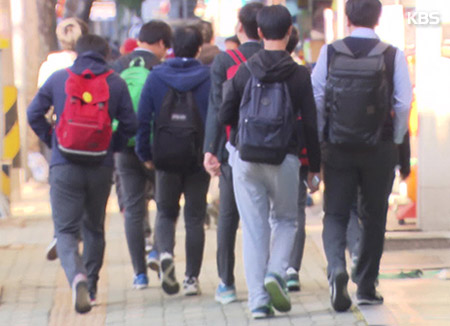 Anchor: South Korean children and teenagers are reportedly the least happy among their peers in Organization for Economic Cooperation and Development(OECD) countries. Despondency is particularly notable in low-income and single-parent households, with such youth expressing greater than average pessimism about the future.
Celina Yoon has more.

Report: South Korean children and teenagers are more satisfied with their lives than before, but are still the most unhappy among their OECD peers.

According to a 2018 survey released Tuesday by the Korea Institute for Health and Social Affairs, Koreans age nine to 17 were asked to rate their happiness on a ten-point scale, with ten being the happiest. The average response was six-point-57.

South Koreans aged eleven, 13 and 15 gave a mean response of six-point-62, slightly higher than a comparable survey in 2013 but the lowest out of 27 countries surveyed in the OECD's Well Being Index of 2015.

At the other end of the spectrum was Sweden at eight-point-one, followed by the Netherlands and Iceland at eight and Finland at seven-point-eight. The 2015 OECD Well Being Index placed the average member state score at seven-point-six.

By category, South Korean young people were relatively more satisfied with their health, achievements, personal relations, safety and neighborhood, giving an average score of about seven.

However, respondents were less happy regarding their living conditions and prospects for the future, with an average score of just six-point-48 and six-point-71, respectively.

Children from low-income households were even more pessimistic about their living conditions, with an average response of four-point-78, and such respondents were also less sanguine about future prospects as well, recording an average of five-point-95.

The institute noted that dissatisfaction of children in poverty is likely related to social discrimination or deprivation of opportunities. It stressed that the government should set up measures to improve their overall quality of life.
Celina Yoon, KBS World Radio News.
Share
Print
List