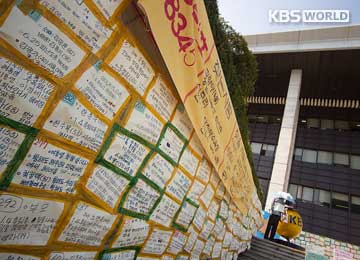 The UNESCO International Advisory Committee has recognized the historic value of a 1983 KBS special program that rejoined families dispersed during the Korean War in the 1950s.

During its 12th meeting in Abu Dhabi, United Arab Emirates on Tuesday, the committee accepted South Korea’s submission to add the program to the Memory of the World International Register.

The newly inscribed Archives of the KBS Special Live Broadcast “Finding Dispersed Families” was a live broadcast over 138 days beginning June 30, 1983 that reunited families who had been separated for some three decades after the Korean War.

The program, which was originally planned for 95 minutes, continued for 453 hours and 45 minutes as people swarmed to KBS asking for help to find their long-lost families.

Of the some 100-thousand people who sought to appear on the program, roughly 53-thousand went on-air. More than ten-thousand were able to rejoin their families.

Along with the archives, Confucian Printing Woodblocks, also submitted by South Korea, were approved for inscription in the 12th Meeting of the International Advisory Committee (IAC). With the committee’s latest decision, South Korea has 13 documentary heritages inscribed to the Register.

The Memory of the World Programme was launched in 1992 “to guard against collective amnesia” and to preserve the “valuable archive holdings and library collections all over the world ensuring their wide dissemination.”