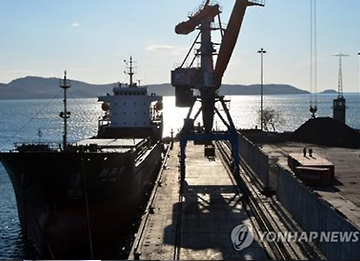 The government has decided to suspend the Rajin-Khasan logistics project aimed at transporting black coal from Russia to South Korea through North Korea.

A government source in Seoul confirmed on Tuesday that South Korean authorities notified Russia of its decision through diplomatic channels.

As part of the Park Geun-hye administration’s Eurasia Initiative, South Korea and Russia in November last year carried out their third pilot shipment of the logistics project, transporting coal along the 54-kilometer route between the Russian city of Khasan to North Korea’s Rajin port for eventual delivery to South Korea.

The Russian government is reported to have expressed its regret over the suspension.

The three-way logistics project linking Russian railways to the North Korean port has been exempted from UN Security Council Resolution 2270, which exceptionally allowed exports of coal produced outside of North Korea via Rajin.

As part of the move, the South Korean government will issue an entry ban on vessels that docked at North Korean ports, disallowing Chinese ships delivering Russian resources from Rajin to the South.

South Korean firms POSCO, Hyundai Merchant Marine and the Korea Railroad Corporation have been participating as a corporate consortium for the project had been selected to explore the viability of the initiative.