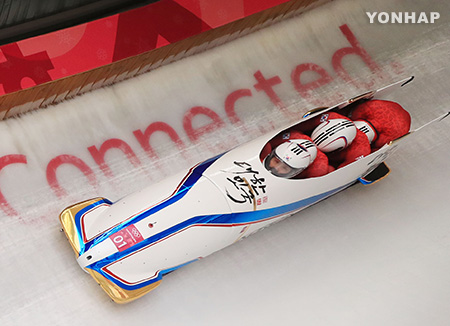 South Korea won a silver medal in the four-man bobsleigh event on the final day of the 2018 PyeoongChang Winter Olympics on Sunday.
​
The team of Won Yun-jong, Seo Young-woo, Kim Dong-hyun and Jun Jung-lin finished second with a combined time of three minutes, 16-point-38 seconds after their four heats at Olympic Sliding Centre in PyeongChang, Gangwon Province.
​
South Korea tied for second place with a German team led by Nico Walther.
​
With the silver medal, South Korea has become the first Asian nation to claim an Olympic medal in a bobsleigh event.
​
The German team, piloted by Francesco Friedrich, took home the gold and the Swiss team won bronze.
Share
Print
List