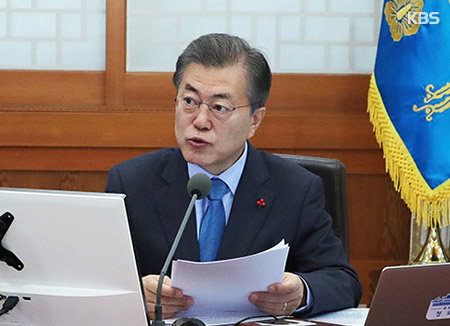 A new opinion poll out on Friday shows a surge in President Moon Jae-in's job approval rating to surpass 80 percent.

In a Gallup Korea poll conducted on over one-thousand adults nationwide Wednesday and Thursday, President Moon's approval rating shot up by ten percentage points this week to reach 83 percent.

This is slightly short of the record 84 percent recorded in the first week of June last year.

His disapproval rating, meanwhile, dropped eight percentage points to ten percent this week while eight percent of the surveyed withheld an opinion.

Gallup said the spike in the approval rating is likely affected by the historic inter-Korean summit and the declaration that followed it.

Compared to past presidents around the time of their first anniversary, Moon's job approval rating stands much higher.

The Gallup poll has a confidence level of 95 percent with a margin of error of plus or minus three-point-one percentage points. Other details are available at the Web sites of Gallup Korea or the National Election Survey Deliberation Commission(www.nesdc.go.kr).
Share
Print
List